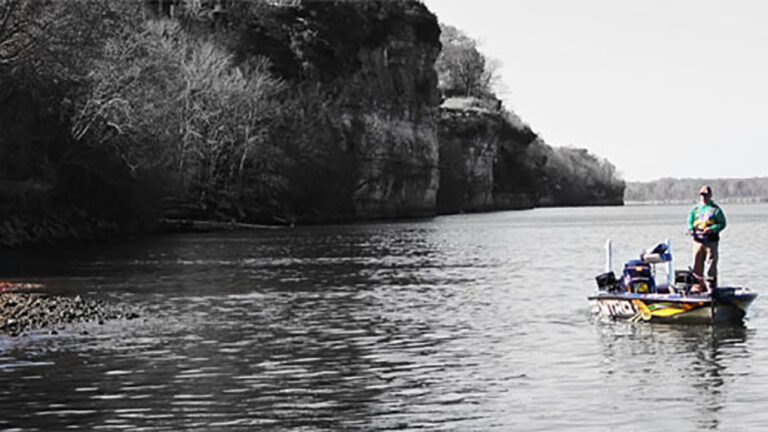 Even though the cold has swept in and gripped most of the nation, fish will still eat moving baits, especially when they are relating to current. One of the most popular current driven destinations in the southeast is that small stretch of the Tennessee River just below Lake Wilson dam on Pickwick Lake. It was there that BASS Elite and Bass Pro Shops pro Timmy Horton developed his current fishing skills many years ago and where he continues to polish the pattern into a fine art.

Current breaks provide crucial ambush points year round, including the winter as well. The bass lay in these slack water areas and have a plethora of bait washed right into where they are. From our perspective, it’s easier to pull up a chair in a local diner and wait for the food to be delivered to us than to wander the country side hoping to find a free meal.

For bass relating to current, the table is already set. All they have to do is find their way through the door and into these “switchback areas.”

“When you have current on a bluff or bar it creates a switchback where the current flow meets the eddy,” Horton said. “The switchback is usually a 3- or 4-foot wide area where the water is slack and the fish can sit relatively still and ambush the prey.” 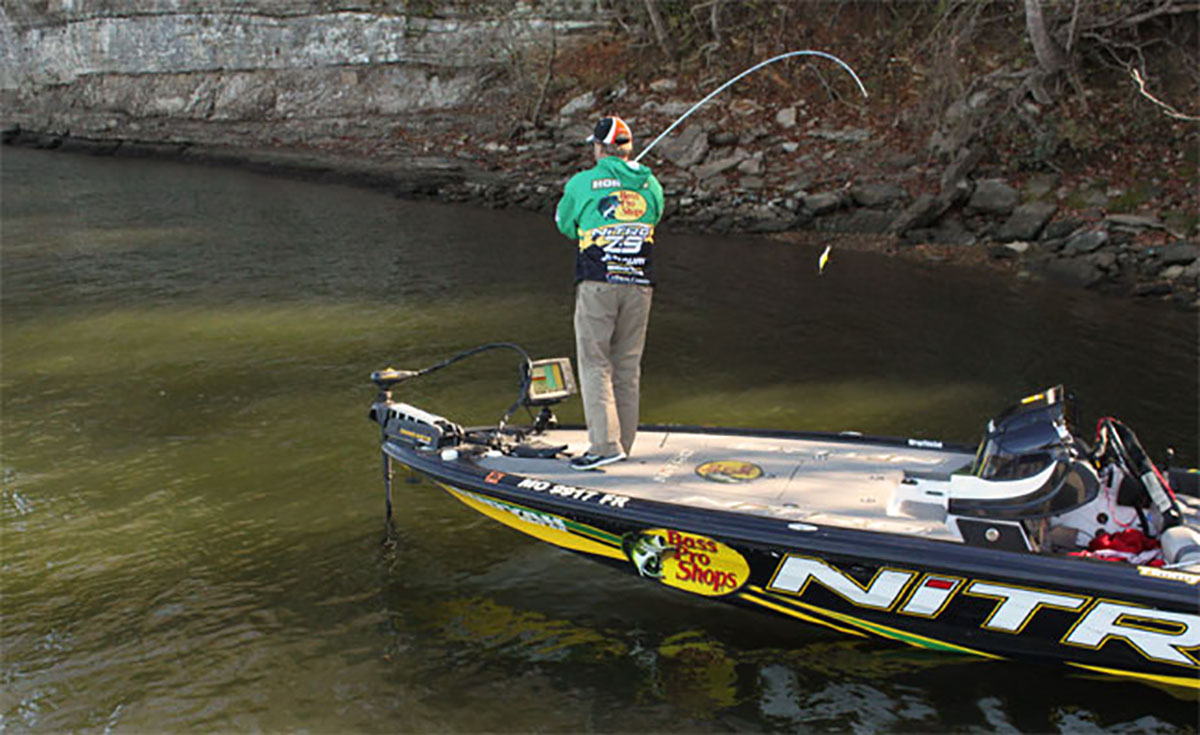 Hitting this spot dead on is crucial. Five feet to the left or to the right and the cast is wasted, so boat positioning and cast accuracy are the name of the game. In order to achieve the best possible outcome, Horton will position his boat below and hopefully in the eddy to where he can make a cast at a 20 to 40 degree angle upstream toward the switchback area.

Repetitive casting is recommended since fishing current breaks involves constant motion. Even if the cast was right in line and tore the switchback directly in half, the bait moves through so fast that the fish might not have had time to react to the bait. It’s also a good idea not to leave after catching a fish since another could be washed right in behind the one you just caught. If everything was right for that first bass to be there, then there is a good chance another will take his seat at the table.

One way that Horton makes the most out of a switchback is through the use of his Power-Poles.

“Downstream from a bar there is a little wash area where it is usually a little bit shallower and I will let my Power-Poles down and have them hold me,” Horton said. “These are areas where you need to make several casts since the fish will move in and out.”

Timing in relation to time of day is not nearly as important on a current driven reservoir as it is on still body of water in the winter time. The sun coming up and warming the water throughout the day plays a huge roll in activating the fish on a lake with little to no current. However with a lake dictated by river currents in the winter, timing in relation to when the current is strongest can be the difference in getting bit and just getting cold.

When the water first starts to move can be the best part of the day for the simple fact that it activates and concentrates fish that haven’t fed in a while. It’s like first thing in the morning or late in the evening throughout the majority of the year. Those are two of the heaviest feeding times for bass and the fish will typically react the same way to those first few minutes of current. So it is always a good idea to hit your best stuff first when you start to feel the water move.

Finding “your best stuff” is understandably a little easier said than done, but Horton does have some tips on locating those sweet spots as well. He often seeks changes in the contour up on the banks. Any transition from bluff to gravel or a change in the topography like a drain or small creek are usually good indicators that something will be different in the water right out in front them as well.

“As you are running down the river, look up on the land, and you’ll see where those drains come out and they make a wash of gravel and sand that the bass will use to break the current,” Horton said.

A neat aspect about a flood control fishery is that, in its draw down to winter pool, a lot of the sweet spots that would typically be found through the use of shoreline indicators or electronics are exposed for the world to see. 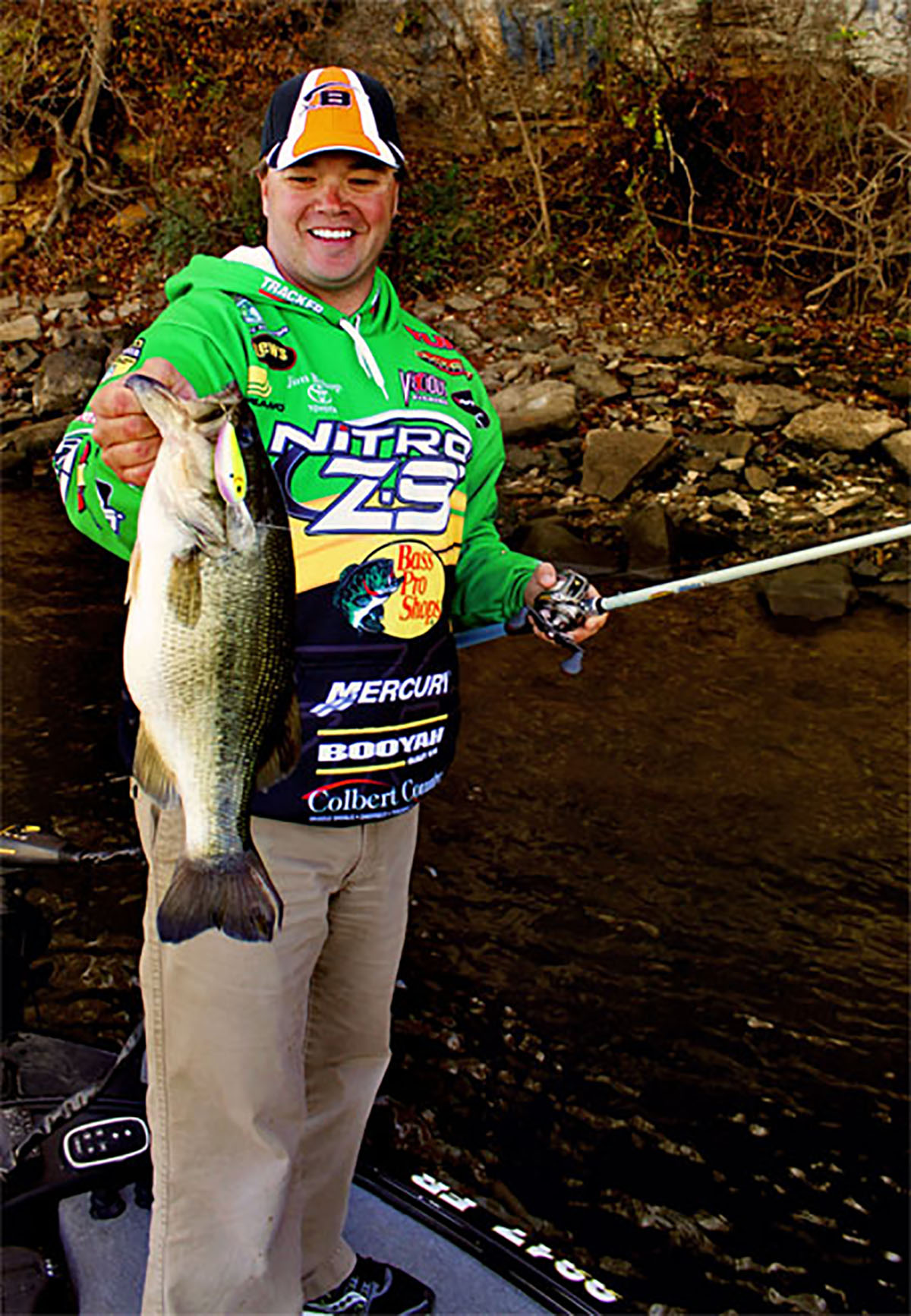 Use this to your advantage, especially if you are out fishing on a day with little activity. A few hours of reconnaissance spent running around marking boulders, stumps and other cover on otherwise featureless bars that are exposed at the time could lead to big catches when the water has returned to full pool and the bass are using those same areas to feed, spawn and rest out of the current.

However, if the water is moving, then the bass are likely biting somewhere, and it’s best to keep your lure wet. For Horton, it’s a one-two punch in the winter time.  He’ll use a deep diving Bomber Switchback Shad and a 5-inch Yum Money Minnow to extract the bass from behind the current breaks.

Rod and reel choice for the Bomber is a 7-foot 2-inch Duckett White Ice Cranking Rod that Horton designed paired with a Lew’s 6.4:1 Laser MG baitcasting reel spooled with 12-pound test Vicious fluorocarbon. Horton will use a 7-foot Medium Heavy Duckett Rod paired with same Lew’s reel and a little stronger line in the 15- to 17-pound range.

The ideal depth is 6 to 10 feet, though the fish will move a little deeper in clearer water and move shallower if the water stains. Largemouth typically hang in the current breaks and eddies a little closer to shore whereas smallmouth will setup on humps and bars out in the middle of the river directly in the current. Overall depth isn’t as important with the humps out in the river as is the differentiation in depth of the bottom and top of the hump.

Remember that anytime you are fishing current in the winter, accuracy is everything. Although everything around may seem to be a mixed up mess, there is a defined switchback area where the bass are sitting still and ready to feed. The key is positioning the boat and making the cast to pluck them out.   And don’t get discouraged if you put the boat in and low and behold the water never moves. Making the most of low water situations by marking exposed structure can convert a slow winter day on the water into a big bag blowout when the fishery comes back to full pool.