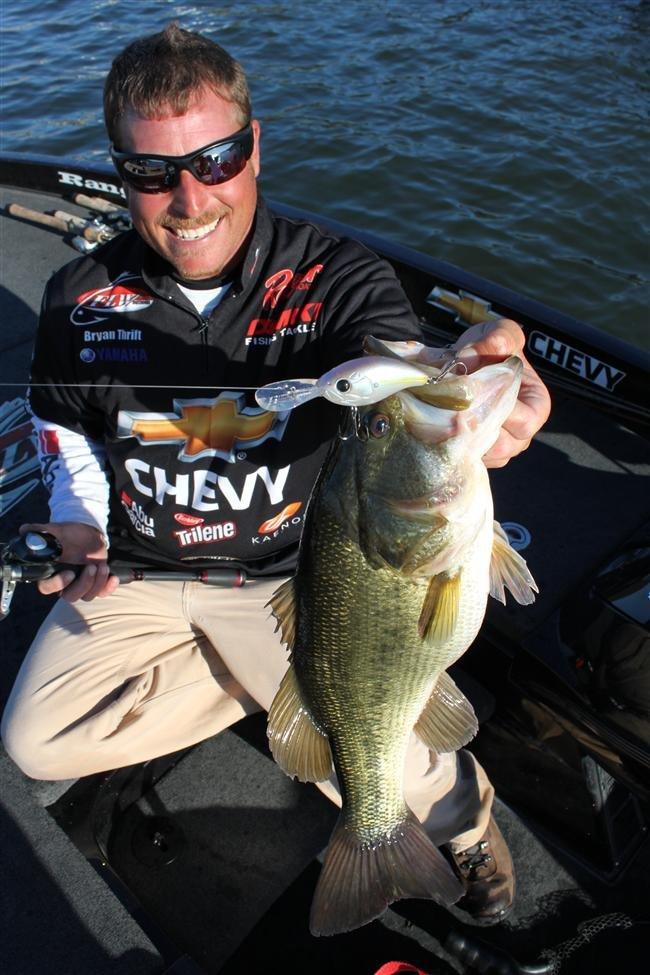 Bryan Thrift burst on to the professional fishing scene a few years ago, winning an FLW Tour Angler of the Year title early in his career and has since solidified him in the sport earning a spot on the prestigious Chevy Pro Team and several wins and top 10s under his belt. One of his favorite techniques late in the fall, early in the winter, when most of the pro tournament fishing has died down is mid-depth cranking his home waters in North Carolina. But it’s a technique that he says will work on a lot of fisheries throughout the country.

As fall turns to winter, the tried and true technique of mid-depth cranking triggers increasingly lethargic bass. Bass migrate in and out the creeks in search of both warmer water as well as food. Although bass feed on all sorts of forage, shad offer anglers the easiest option to find in many fisheries not already icing over for the winter. They should therefore be regarded as the first sign that you are in the right place.

“The main thing you want to look for in the late fall early winter is bait,” Thrift said.

If you find the bait, you will typically find the fish. Not to say that there aren’t fish in other areas feeding on crayfish for example, it’s just a lot harder to pick up crayfish on a Structure Scan than it is a giant ball of bait. Targeting what you know is there instead of what you hope is there takes out a lot of the guess work.

Once you find the bait, you should notice they are typically suspended, not along the surface but also not stuck to the bottom. You want a lure that will mimic this as well. That’s why the medium diving crankbait works so well during this transition when the bass and shad are suspended between 8 and 12 feet deep.

Instead of bumping the bottom like an angler typically would with a deep diving crankbait or square bill other times of the year, target the fish up off the bottom, bringing the medium diving crank through the school of shad. As the crankbait barges through, it scatters the shad and the bass will come up and target the straggler of the bunch, which unfortunately for him has six hooks dangling off of it.

“I might be fishing a channel swing bank where it’s 15 feet deep, but I’ll be throwing a crankbait that only runs 8 to 12 feet deep,” Thrift said. “They are relating more to the bait than the structure. It’s not a reaction strike where you have to bump something to get the fish to bite. Those bass are around those shad for one reason – to feed.”

Thrift’s plug of choice for this style of fishing is the new Damiki DC400 in Real Shad. The color is somewhat like a chartreuse shad derivative and gives the bait just enough similarities with a real shad for it to blend but is still different enough from the surrounding baitfish for the bass to be able to single it out. 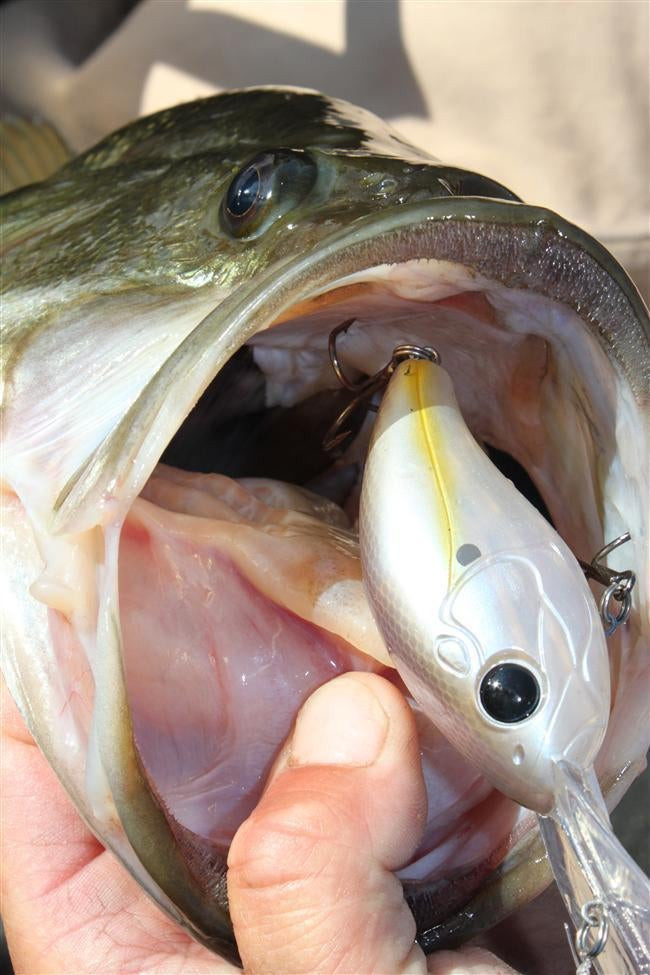 A constant retrieve is the standard for the suspended bite but pumping, jerking and pausing the crank can trigger strikes on any given day. It’s best just to sample a little of everything and let the fish tell you what they want. Just make sure not to get in a rut. If you haven’t had a bite in a while, try a little something different.

Though the water temp plays a large part in where a lot of anglers choose to fish as the whole fishery begins to cool, Thrift focuses solely on the bait.

“Mainly I’m looking strictly for bait,” Thrift said. “I don’t care if the water is 5 degrees colder than it is anywhere else on the lake. As long as there’s bait there, I have confidence that there are fish suspended in it somewhere.”

Using your graph and the naked eye you’ll eventually find the shad somewhere in the creek. The thing that Thrift has noticed more times than not is that, even in a creek that is several miles long, once you find some of the baitfish, you’ll typically have found them all. Ninety percent of a 5-mile long creek’s entire bait fish population might be congregated in a 300- or 400-yard stretch.

Channel swings and bluff walls require a little different boat positioning. If the shad are concentrated in the channel, Thrift will line up parallel to the channel where he can try to bring his bait through as many schools of shad as he can with each cast. However if the shad are scattered out all around, boat positioning plays a smaller roll and it becomes more of a cast where you wish type pattern in which you fan cast all around hoping to intersect a pod of baitfish here and there.

As far as the tools needed for this type of fishing, Thrift has it down to a science.

“Damiki makes a 7-foot medium-action rod that I use for a crankbait, and it’s hands down my favorite cranking rod of all I’ve ever thrown,” said Thrift

He pairs the rod with a Revo Winch reel spooled full of 12-pound Trilene Fluorocarbon and argues that this combo is about as good as it gets for a mid-depth crankbait.

If you are in a late fall early winter situation, on a lake that isn’t dominated by shad, then you only have to modify the technique slightly. The same channel swings and deeper banks where you would have found the shad schooled up will still hold the bass. The difference in the technique is as simple as shifting your focus from the channel to the bank.

“I am going to run the same pattern but instead of looking for the bait I’ll look more for rock and wood like cover along the bank itself,” said Thrift. “I’ll look for structure and transition banks where the bank goes from clay to rock and run that medium diving crankbait right down it.”

So whether you’re milling through tons of shad on a southern impoundment or you’re making rounds on a lake closer to home with a lot less shad to go around, you can target and catch lots of bass this time of year by simply looking at the topography of an area and targeting the highways and byways that shad and bass alike use to relocate in the winter time.

Don’t get caught up trying to feel something with your bait if you are around baitfish. Remember that you are fishing the shad and not the structure. But if you aren’t around a lot of shad you need to focus more attention on the bank and not the open channel, being sure to keep contact with the bottom and bump as many pickoff points like rocks and logs as possible.

Get the right rod, reel and line combo put together and you should be able to take these tips from a tour level pro out on your next trip and capitalize on the not too deep, not too shallow, just right mid-depth cranking bite. 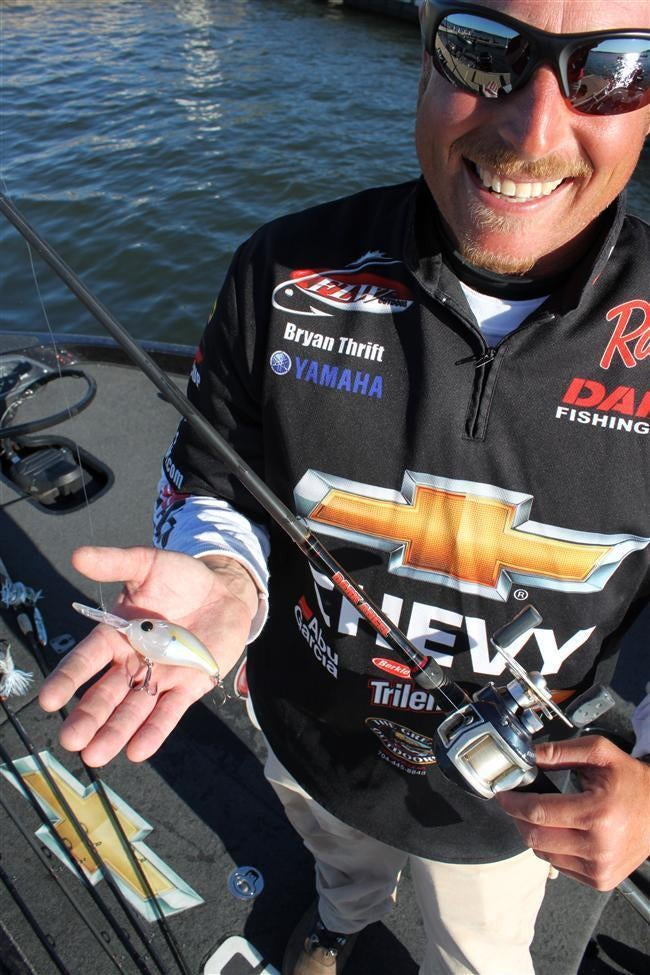