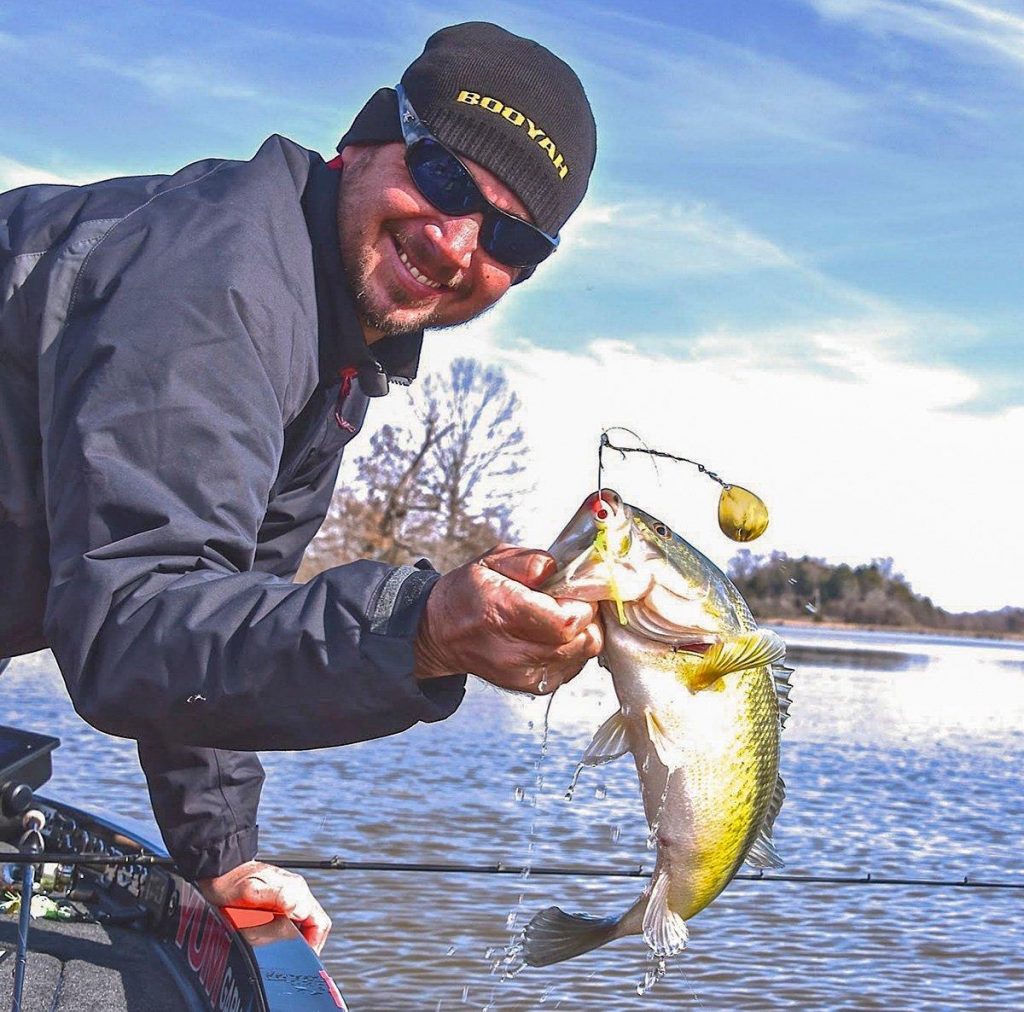 Many anglers think winter means extremely cold, clear waters with atypically dormant bass. In warmer flood years, like we’re having with El Nino this year, it means a lot of higher, dirtier but often warmer water for bass fishing. These phenomenons can stump the most savvy of bass anglers but Elite Series pro Jason Christie offers some great tips for searching for winter bass in abnormally dirty, high waters.

High dirty water leads Christie to think of a spinnerbait, even in the winter. While a spinnerbait might not be high on every angler’s list of wintertime baits, Christie has learned they can be a saving grace when bass can no longer see something like a jerkbait or a drop shot.

Learn from the water

“As soon as I get to a lake the first thing I am gonna notice is the water color,” Christie said. “Winter fishing is very dependent on water color. The color of the water will help you dictate which baits you need to be using which can jumpstart your day.”

When you are faced with a warmer-than-normal temperatures coupled with a massive amount of rain like we’ve had this winter, anglers have a prefect scenario for catching winter bass on a spinnerbait.

“When we have clear, cold water I will most likely be jerkin’ a Smithwick Rogue or tossing a YUM Money Minnow around as a search bait,” Christie said. “Those baits are effective because the bass can see them in cold, clear water. Well, when the water is stained or muddy, bass can’t see those lures; but they can still feel the thump of a Booyah Spinnerbait.”

“Your water temperature will tell you how fast, or how slow, you should be retrieving your bait,” Christie explained. “Generally, the warmer the water, the more active the bass and the more aggressive you can get with the speed of your retrieve. In the winter, it is important to note that a bass’s preference will change day-to-day, even hour-to-hour.” 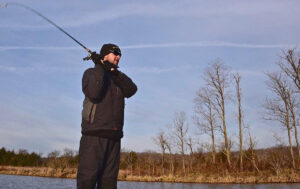 Winter bass fishing outings don’t usually result in a lot of bites for an angler, no matter what lure you’re throwing. More so than any other time of year, anglers need to put themselves in areas where they believe the fish live. It seems bass often feed in small windows throughout the winter months. Meaning you may fish down a stretch loaded with bass, but if they aren’t ready to eat, you very well might not get a bite.

By fishing exclusively in areas you know bass feed, you’ll be prepared and in place for these windows. When choosing optimal spinnerbait locations, Christie follows a similar approach to make himself more efficient.

“In the winter months, I am hardly ever going to fish ‘in the dirt’,” Christie said. “I’ll fish shallow, meaning 8 to 10 feet or less, but never up really shallow where a bass would have to swim a ways to get there. If I am fishing a stretch of bank, it will be a stretch of bank that has a channel swing or drop off next to it. Having deep water nearby gives those bass an option, so they don’t have to move as far to change depths in changing weather.”

Coves, creeks, or long stretches of shallow bank without a defined channel near them will be taken out of the picture for his wintertime fishing.

“In my mind, a bass would much rather move vertically than horizontally in cold water,” Christie explained. “That is one of the best things about a spinnerbait. With one lure you can cover the entire water column, from 10 feet deep to inches below the surface. You don’t have to tie on 5 crankbaits with different diving depths; just by varying your retrieve you can cover all the potential strike zones.” 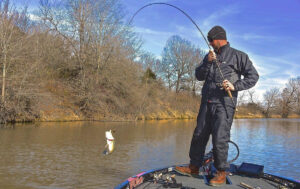 Fish up but not up on the bank

“In the morning, I might have to crawl a spinnerbait by a piece of timber in 8 feet of water,” Christie said. “But I’ve noticed, if I fish that spot in the afternoon, I might catch a bass on the same tree but it’s up suspended in 3 feet of water. That bass didn’t get up shallow on the bank, but it got shallow in the water column to soak up some of the afternoon sun.”

When it comes to specific types of structure to focus your efforts, Christie believes one isn’t better than the other. From rocks and docks, to flooded laydowns and grass, Christie will fish it all.

“I’ve caught bass in the winter on all kinds of cover,” Christie admitted. “The bass are using the same structure they would the other 9 months of the year, they just aren’t moving as fast or feeding as much. I let the sun dictate what type of cover I am fishing more than anything. Usually, the more sun, the more fish. 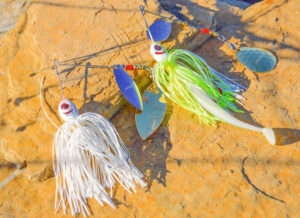 Christie fishes his spinnerbaits on the following setup:

Trail it without a hook

Christie avoids using a trailer hook during the winter months, and he also doesn’t make any alterations to the skirt of his spinnerbait but does add a trailer.?“I throw a YUM Swimmin Dinger as a trailer about 90 percent in cold, off-colored water,” Christie said. “The real magic of adding a trailer is it allows me to fish a spinnerbait slower. A Swimming Dinger has a little boot tail on it that will help raise the bait in the water column on my retrieve, and it will add more vibration. Helping the bass find it and helping me keep the bait where I want it.”

High, dirty water can make winter bass fishing tough, but not impossible. Pay attention to the current conditions and your surroundings to give you an idea of where to start. Then heed Christie’s advice and fish efficiently to still have a fantastic day on the water.