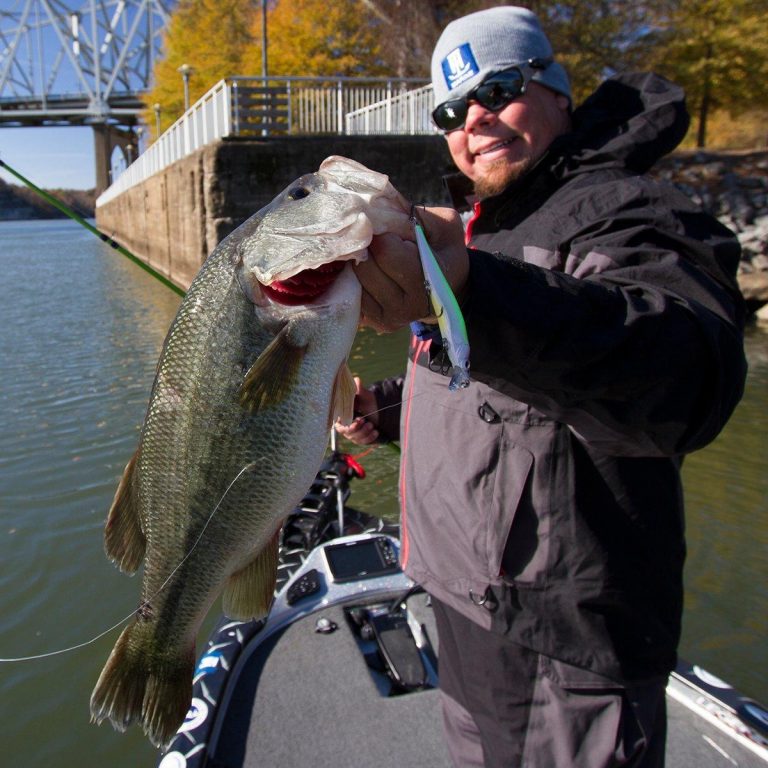 There sure are a lot of jerks downtown â€” but not what you might think. Weâ€™re talking jerkbaits for bass fishing – one of your top choices around the manmade structures bolstering waterfront parks, walkways and green spaces.

For topical tips, we talked with Bassmaster Elite Series pro Chris Lane, a past Bassmaster Classic champion and jerkbait aficionado. Lane considers this technique one of his top presentations whenever heâ€™s working a downtown waterfront â€” particularly in the wintertime.

â€œA downtown waterfront can be a good wintertime opportunity because you have seawalls, riprap and solid concrete and rock structures which brings in the heat on sunny days,â€ Lane said. â€œThe baitfish push up along the seawall, bridge or pier, and it creates a feeding zone for the bass.â€

Also important is the spiraling fingers that occur when current deflects off of, or bends around something solid.

â€œOne of the biggest things about fishing a waterfront area is to look for an eddy,â€ he said. â€œYouâ€™ll have a straight wall, and then youâ€™ll have a crease where the water has to turn. Thatâ€™s going to create an eddy.

â€œYouâ€™ll have a long straight area, but either at the front of it, in the middle of it or behind it, thereâ€™s going to be some sort of current break. Thatâ€™s going to be a key area.â€

While Lane sees strong similarities in a downtown seawall and the semi-vertical bluffs walls, he points out there also are a couple of prominent differences. For one thing, bluffs typically have some type of overhanging vegetation from which falling insects attract bluegill and other forage species.

Seawalls, on the other hand, are more consistent in form. While bluffs usually comprise some level of subsurface diagonal sloping, often with random rocks and other current-borne debris, seawalls present a straight line from the surface to the bottom.

This tends to keep the fish closer and allows you to work a fairly constant distance.

WHERE TO LOOK FOR DOWNTOWN BASS

At times, you might find bass anywhere along any seawall, but Lane notes that certain features increase the probability.

Interruption points – From a distance, seawalls may appear to be a continuous mass, but up close, we often find alternating gaps, which bolster structural integrity. Anglers also find this design feature advantageous.

â€œVery seldom will you a seawall thatâ€™s straight,â€ he said. â€œThey all have those channels that run down about every two feet.

â€œIf thereâ€™s water flowing it creates eddies and it provides a place for baitfish to hide. A lot of times, thatâ€™s where the bass will ambush the bait. Iâ€™ve seen that all the way from Pickwick Lake up to Lake Champlain.â€

In the breeze â€” Windward banks are always worth exploring, but seawalls amplify the notion.

â€œIf you have wind blowing against a seawall, thatâ€™s a solid source,â€ Lane said. â€œSo, itâ€™s going to be pushing the baitfish onto the seawall. Wind also pushes bugs and other (small forage) up to the seawall and that attracts bluegill in addition to smaller baitfish.â€

As Lane points out, a seawall presents a finality that keeps the action close at hand. Wind-driven forage gets held by this rigid sideline and that provides a distinct advantage for bass.

â€œThereâ€™s no where else to go, whereas with rock, grass and other structure, the waterâ€™s going to push back into it and scatter out the baitfish,â€ Lane said. â€œA seawall is solid and itâ€™s not going to move. The water canâ€™t disperse.â€

Donâ€™t just settle for the windward side; work all four sides, particularly the corners. Remember the importance of eddies, so donâ€™t hesitate to pull back off the pilingâ€™s down current side to see who might be using this water dynamic for an easy feed. 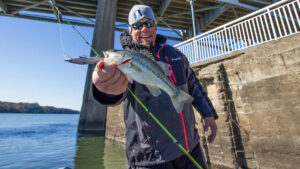 Jerkbaits are especially effective this time of year, as they convincingly mimic baitfish stunned by falling water temperatures. Proximity matters, so keep your bait in the strike zone â€” even if it varies vertically.

â€œThe ambush point is on the wall, so the closer I can get to the seawall the better,â€ Lane said. â€œI usually want to fish horizontally, so Iâ€™ll position my boat close to the wall, make long casts and work my bait along that edge.â€

Eddies tend to push the action farther from the seawall, so Lane allows sufficient space to thoroughly work these concentrated areas.

Lane fishes his jerkbaits on a 6-foot-6 medium-heavy rod with a 6.3:1 reel and 10- to 12-pound fluorocarbon line. Heâ€™ll typically start with a twitch-twitch-twitch-pause cadence and adjust as needed to match the conditions and fish disposition.

In colder water, single twitches and longer pauses may be what the fish need; whereas a peppier pace might be the deal for warming trends. Somewhere in between, heâ€™ll dial in the dayâ€™s preference.

Lane keeps his color selection simple, with black back shad patterns handling most winter scenarios. In exceptionally clear water, heâ€™ll go with translucent baits, while a little stain may warrant something more eye-catching, like a purple/chartreuse paint job.