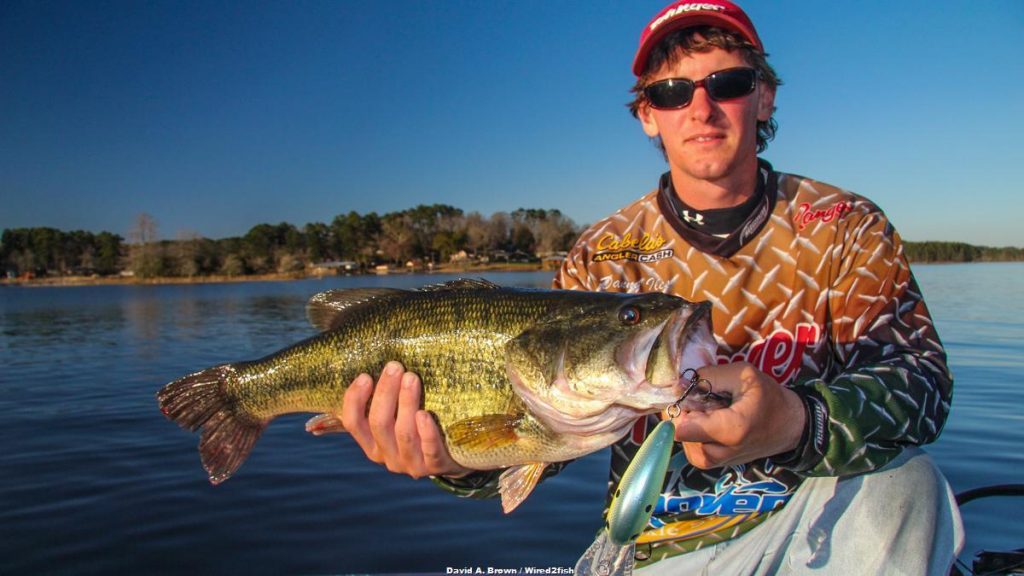 Think about those frosty weekends when you don’t want to get out of that warm bed. At some point, you’re going to get hungry, but venturing far from the cozy digs just ain’t gonna happen. So, in walks a thoughtful family member with a sandwich, a bowl of soup or a slice of pizza on a bed tray.

Pretty easy decision, right? Same logic applies for Texas winter bass hugging the bottom. Texas isn’t like most other states during the winter, so it has some of its own rules. But anglers will be surprised how often these techniques work on other winter lakes across the country.

“A lot of the fish are in their winter pattern starting in December,” Johnston said. “They’re mostly on creek bends, ridge drop-offs and tree lines following the shad. Where the shad go, the fish go.

“If you’re driving around and see that bait balled up, make sure your boat is positioned so you can drag your bait right along the edge of the creek bend or the grass line. Boat positioning is critical because the fish are cold and sluggish. They don’t want to chase the bait. You have to put it in their face.”

Toledo Bend is unique because the grass grows really deep in this lake, so the fish will also use those deep grass lines in 20-plus feet.”

Worth noting, Falcon Lake on the Texas/Mexico border finds the bass preying largely on tilapia, but the same principle holds true there. The forage holds along deep edges and the bass follow suit.

Within this general winter pattern, Johnston expects certain variances based on meteorological fluctuations. Overcast days keep the water cold so the bass stay glued to the bottom. Likewise, the big north winds associated with cold fronts send chilly blasts across Lone Star lakes and that, too, will limit the mercury’s ascent.

On the other hand, sunny conditions allow solar warming to penetrate the depths, raise the water temperature where it matters most and encourage bait schools to rise higher in the water column. Noting the day’s conditions helps Johnston plan his attack.

Johnston warms up his cold Texas days with consistent bass action based on the simple principle of taking meals to the fish. This, he accomplishes with a trio of deep winter baits:

With the exception of Falcon’s tilapia-based forage, Johnston sticks with Sexy Shad or a basic white/black back shad color, but he keeps a trio of Strike King crankbaits handy to cover the depth range he commonly fishes in the winter. For 12-16 feet, the 6XD does the job, while the hulking 10XD does the heavy lifting in 20-plus feet. Strike King’s new 8XD will be available to the public in February, but after testing prototypes, Johnston said this bait fills an important gap between the two by covering that 16- to 20-foot stuff.

“You want to try to cover as much water as possible and find a school of fish,” Johnston said. “Once they slow down, you can turn around and use your (bottom baits) to catch the ones that are not as active.”

“You’re digging more with that bigger crankbait and that 6.2:1 reel helps you get it down faster,” Johnston said.

Boat positioning, Johnston said, is critical this time of year, as the fish aren’t going to run very far to grab a bait. Make proximity your pal and give your bait maximum exposure in the strike zone.

“The fish won’t all sit out suspended in the middle of the creek; there will always be some up against the wall of the creek, there’ll be an extra stump, a log or something that will hold them.”
Bare ridges get a similar approach, with Johnston sitting out deep, casting atop the ridge and working his bait down the drop-off. Digging bottom all the way down is the key to triggering strikes from fish holding at different levels.

“Also, you may have an 18-foot flat that falls off to 20 or 21 feet. It doesn’t take much, just a little drop, where that water temperature is a couple degrees warmer and that bait will settle down.”
If the crankbait bite cools with bass still marking on the bottom, Johnston will slow down and mop up the spot with a Carolina rig or a football jig, depending on how the fish are positioned. 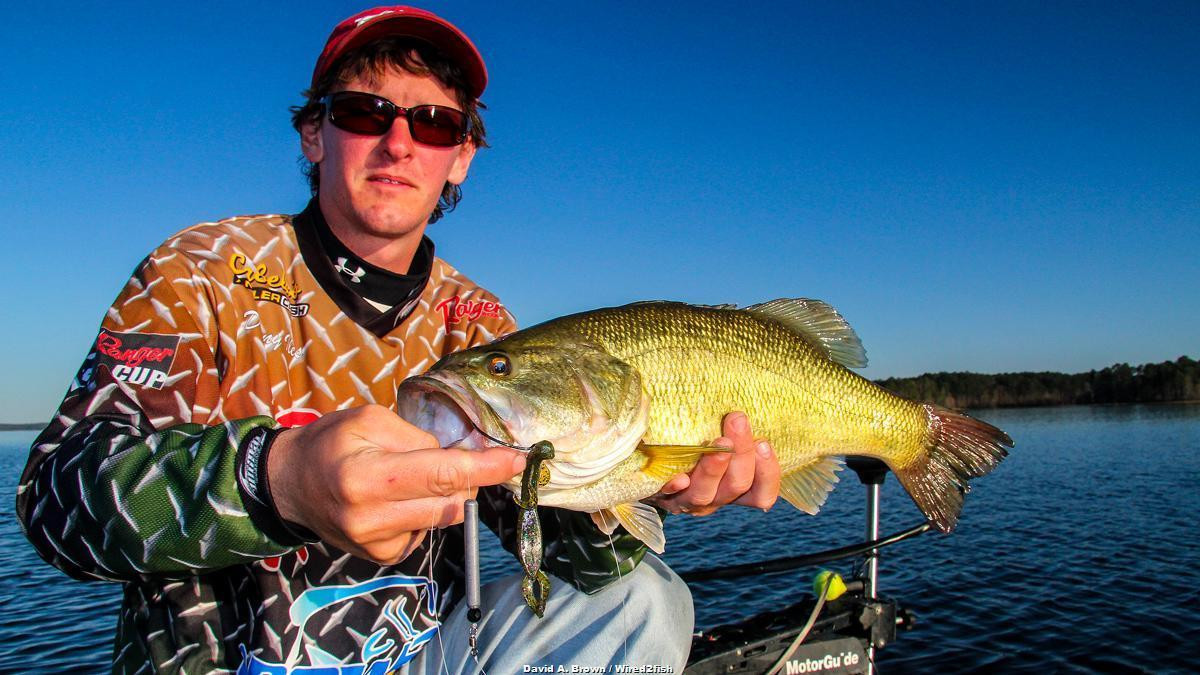 If a sunny day has the fish loosely relating to the bottom, Johnston employs the old ball-and-chain.

Armed with a 7-foot, 6-inch medium-heavy rod and a 6.2:1, he anchors his rig with a 3/4- to 1-ounce Strike King Tour Grade tungsten weight for maximum bottom disturbance. A Sampo swivel connects his 20-pound fluorocarbon main line to a 16- to 36-inch leader of 16- to 25-pound monofilament. Leader size is based on cover density, while clarity determines length.

In the winter, using heavier monofilament leader line will cause the bait to fall slower.

“;If the water is dirty, or if I’m in deeper water, I’ll use a shorter leader,” Johnston said. “What happens is that the fish can’t see the bait as well, but they will hear that tungsten weight crashing along the bottom and they’ll bite the bait if it’s closer.”

On colder days, Johnston likes the subtlety of a V&M Pork Pin, while a V&M Lizard or a Zoom Brush Hog does well during warm-ups. Black and blue baits are his preference and all fit well on a 4/0-5/0 Owner rigging hook. 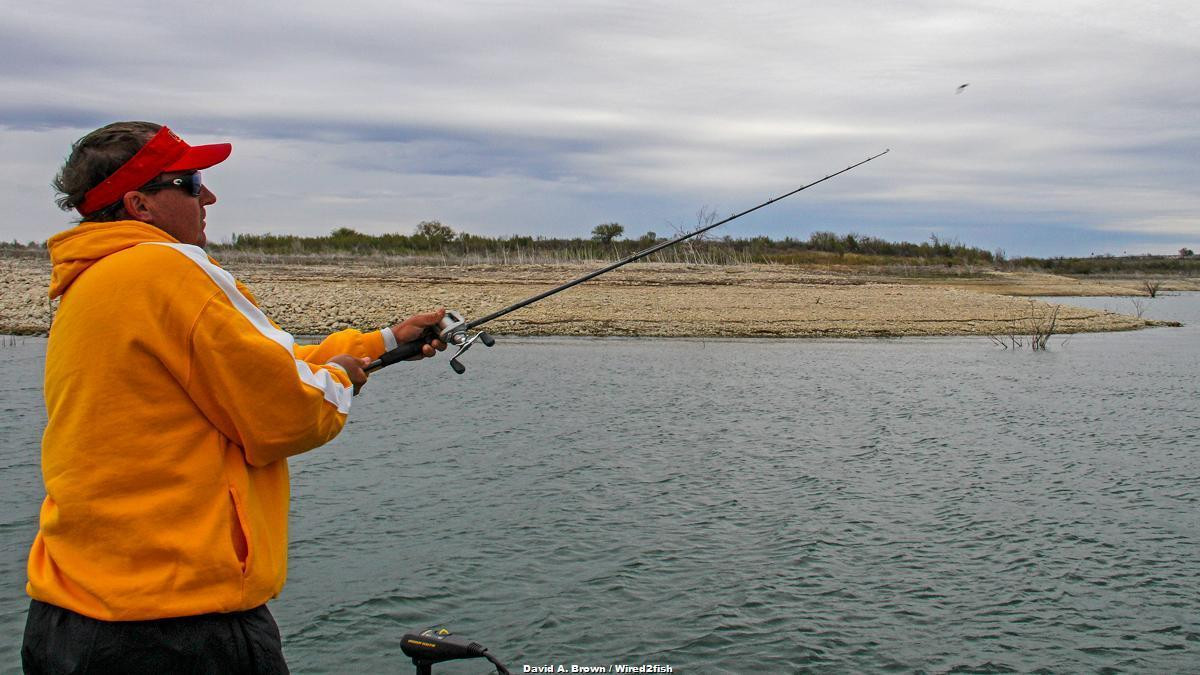 When those nasty cold days have the fish buttoned to the bottom, Johnston knows he’ll need to practically bump them in the nose to get a response. That’s when the football-head jig will loosen up a few bites that even the C-rig won’t.

“A lot of times when you get on a group of fish, you can drive over them and see that they’re stuck on the bottom because that bottom is warmer,” Johnston said. “Those fish will go down there and put their bellies on the bottom or they’ll be right up against a stump. That’s when you can take that football jig and just slow drag it.

“You want to drag it right up to a piece of structure on that creek bend, or on a tree line or a point of grass. You can let that jig sit there and fish for you. The slower you can work that jig the better because you’ve already caught most of the aggressive ones on a crankbait and now you’re just slow fishing to get the rest of the fish to bite.” 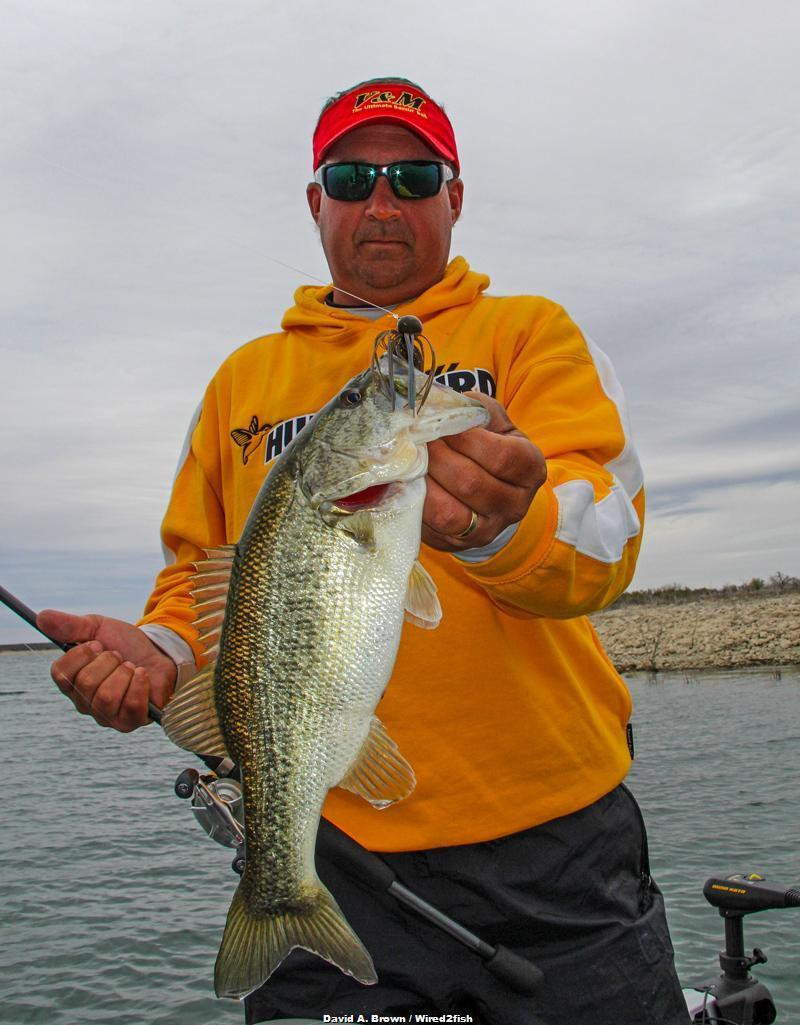 Johnston uses a black, blue or watermelon 3/4- or 1-ounce V&M football jig with a Strike King Rage Craw trailer. If the fish are finicky, he may trim the first segment off the Rage Craw or go with a Baby Rage Craw. Smaller profiles get the tougher bites, but Johnston notes that winter also finds fish plenty willing to bite a bulky jig and trailer package.

“When the fish are cold, they don’t want to eat much, but they want to eat one good meal,” he said. “You might not get as many bites, but you’ll get those quality bites.”

For football head duties, he uses the same basic outfit he would for Carolina rigging, but he may go as light as 16-pound fluorocarbon for a faster fall in deeper water.

With this Texas trio, Johnston encourages anglers to make the most of their winter days by spending the first hour or two riding and looking. Invest some time locating the bait schools, so once the fish thaw out and “wake up,” you’ll have a bead on the most promising areas. 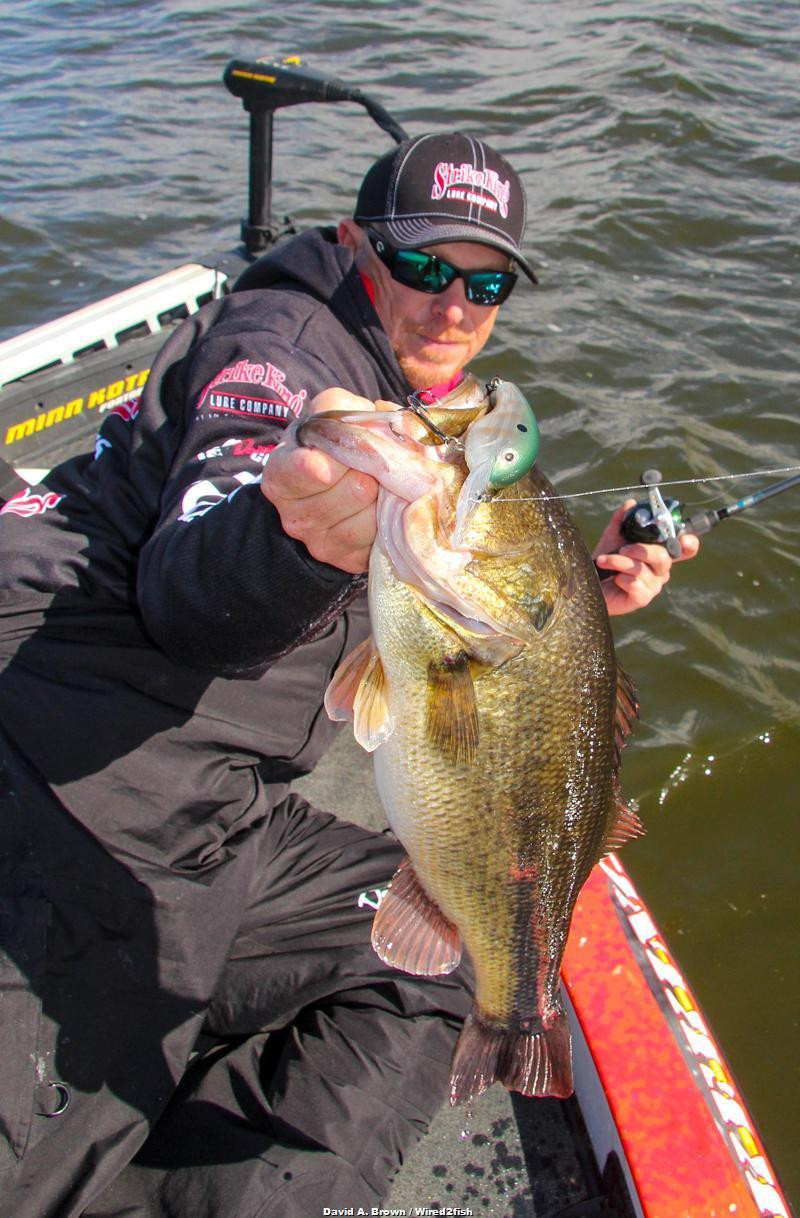