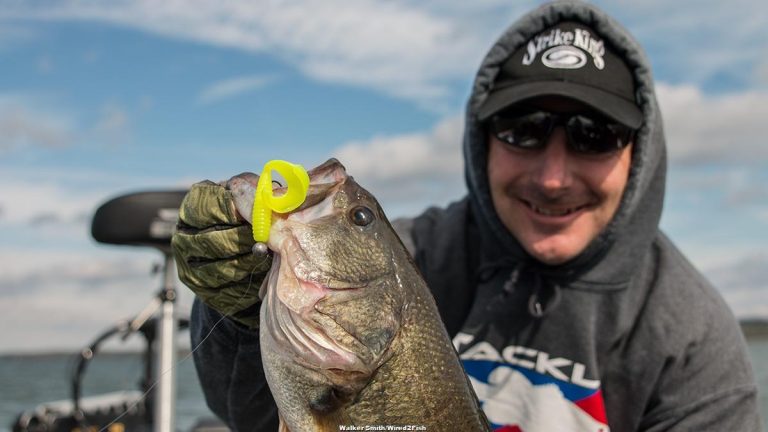 Much like society as a whole, bass anglers are becoming increasingly enamored by the latest technological advancements. Let’s take a look at fishing lures. Gone are the days of a single tackle box filled with a few specific confidence baits on which we heavily rely. Instead, we’dre now spending hundreds of dollars on newer and often sexier offerings.

Do these new baits work? Absolutely. And many deserve to play a prominent role in our bass fishing arsenals. But we should always leave some extra room for those age-old favorites that continuously produce trophy bass.

According to Elite Series pro Mark Menendez, the sheer effectiveness of grubs in cold water should never be overlooked or taken lightly. These oft-forgotten baits are directly responsible for some of his most memorable winter fishing days and more importantly, anyone, regardless of skill level, can use them with outstanding success.

In order to become proficient with these classic soft plastic baits, there are four important things to understand.

Grubs may be named for their uncanny resemblance to the larva of several insects, but don’t let that fool you. When rigged on a weighted jighead, they closely mimic the natural swimming action of a coldwater baitfish.

“These baits have a very similar vibration in the water as a shad does,” Menendez said. “Shad shimmy as they move through the water and as the temperatures drop into the 40 to 50-degree range, that narrow swimming action becomes even less pronounced. Remember, bass are largely sight-oriented feeders in cold water, so a natural, non-imposing action is hugely important right now.”

Because they offer such a natural, shad-like profile and vibration, Menendez makes an effort to target bass that are primarily feeding on — you guessed it — shad. This narrowed focus allows him to drastically decrease his search efforts and take advantage of very specific areas.

“With the bass coming into their wintertime patterns, we know two very important things,” Menendez said. “This tells us the majority of the activity will be located towards the mouth of every major creek or in the main lake. By identifying the most high-percentage areas of your fishery, you can cut down the chase and totally eliminate dead water.”

More specifically, he looks for vertical banks in these areas. As the bass metabolism slows with the decreasing water temperatures, they’re not likely to swim several hundred yards for a quick bite to eat. This verticality, however, offers quick access to both shallow and deep water with very little energy exertion. 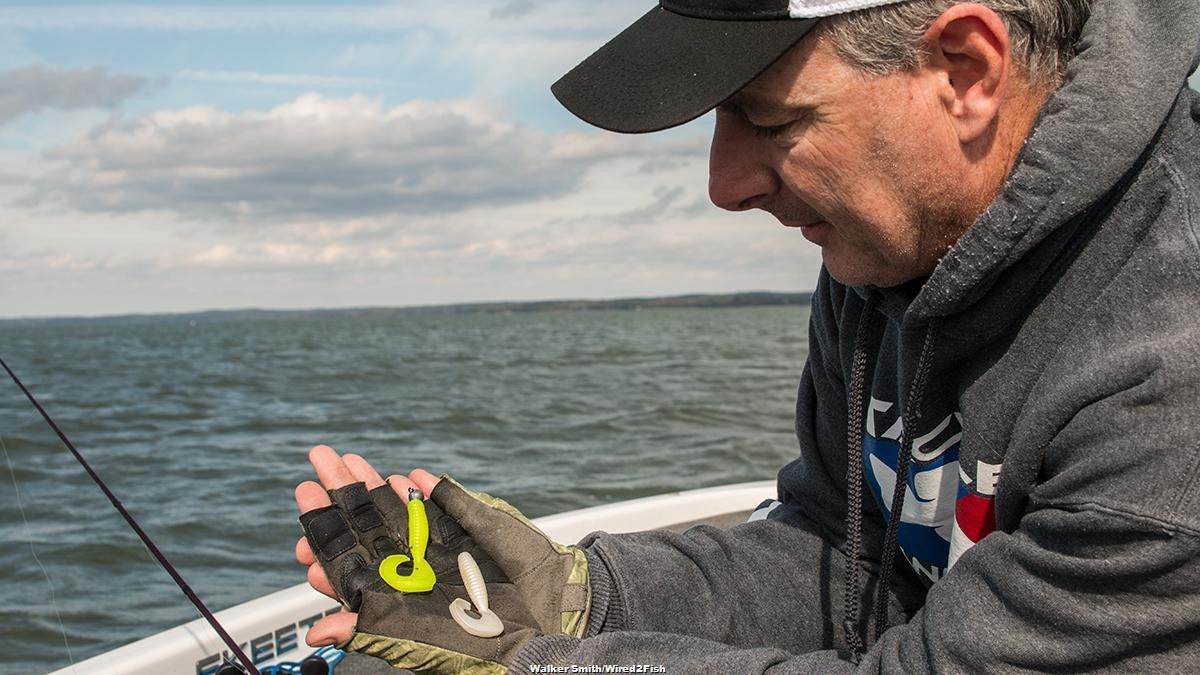 Specific depth zones can be paramount when you’re fishing a grub in the winter. Paying close attention to the depth at which your bites occur can make coldwater bass quite simple to pattern. If you catch them in 20 feet of water on one spot, they’ll likely be found at the same depth range throughout the majority of the fishery.

“These bass will be positioned at very specific depths and they’re not going to chase a bait like they would in the warmer months, so it’s important to put it right in front of them as often as possible,” Menendez said. “You’ll need to make a long cast and count it down before beginning your retrieve. It will take some experimentation, but make sure to count with each cast. Soon you’ll notice the majority of your bites occuring at a certain depth.”

In order to adjust your grub’s fall rate and ability to remain in the most productive strike zones, Menendez suggests the following system.

To be quite honest, wintertime grub fishing isn’t very exciting. It’s often referred to as a do nothing technique but that doesn’t mean it won’t do some serious damage on big bass.

Grubs are like the last kid on the block picked for a kickball game. They’re not flashy, they don’t have much action and they don’t feel like much on the end of your line. But every now and then that kid surprises you by making an awesome play and becomes a hero.

Once you gain a solid understanding of likely wintertime bass areas and the myriad of jighead selections, fishing grubs is the easy part. Regardless of your experience or skill level, it won’t take long to master the technique.

“Following a long cast and a predetermined countdown, keep your rod at a 45-degree angle and crank slowly,” Menendez said. “The bass won’t want it hopping and jumping around, so all you need to do is maintain a steady and deliberate retrieve. That’s honestly all there is to it.”

Because this is such a subtle finesse technique, it’s essential to use the proper equipment. In order to maximize his sensitivity and castability, Menendez uses a spinning rod and light tackle 100 percent of the time.

“I prefer a 7-foot, medium-heavy Lew’s Custom Speed Stick Spinning Rod paired with a 2000 series Lew’s Team Gold Carbon Spinning Reel,” Menendez said. “And my line selection changes a bit depending upon the conditions. I’ll use 6 or 8-pound Seaguar InvizX most of the time but when it gets incredibly cold out there, I actually use 6 or 8-pound Seaguar Senshi monofilament for better handling.” 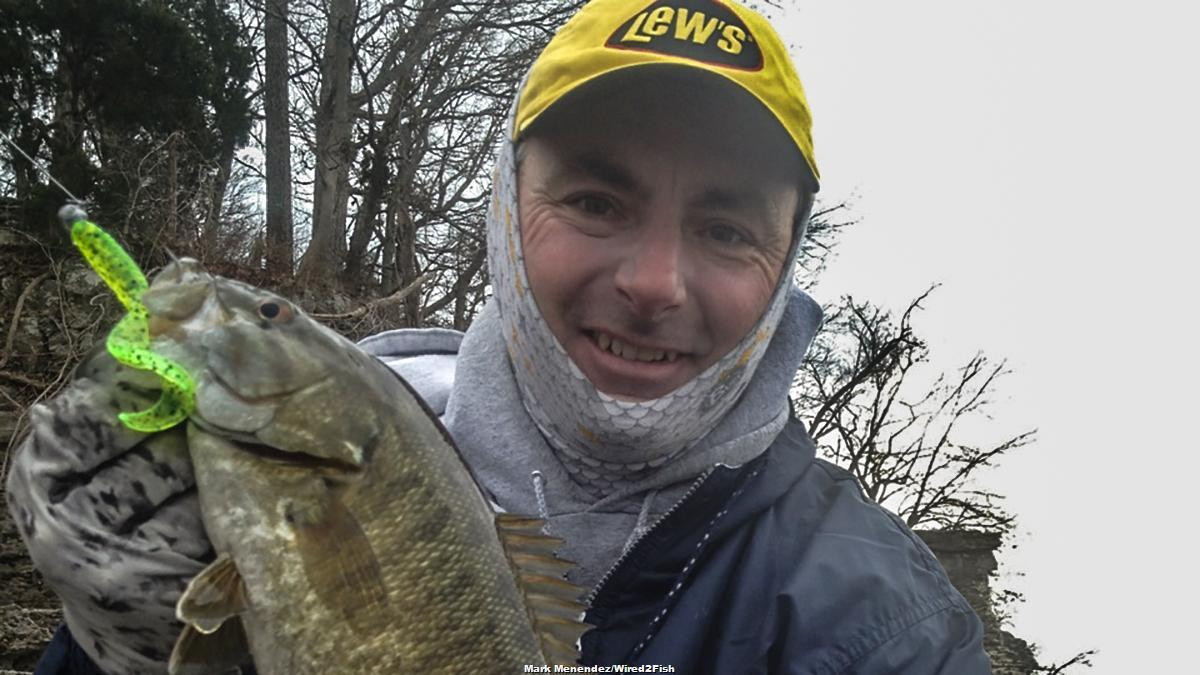 It doesn’t really matter what technique you’re using, you can’t always expect red-hot bass fishing action throughout the winter months. When your hands are frozen and you haven’t had a bite for a while, it’s tempting to go into zombie mode and release your frustration on the hookset.

Both are a major no-no.

If the winter weather is resulting making the bite tough in your area, make it a point to do some grub fishing the next time you go fishing. If you can apply these tips in high-percentage areas, you’ll probably wonder why you didn’t try it sooner. Remember, just because nobody talks about ‘em. doesn’t mean they won’t catch some giant bass.