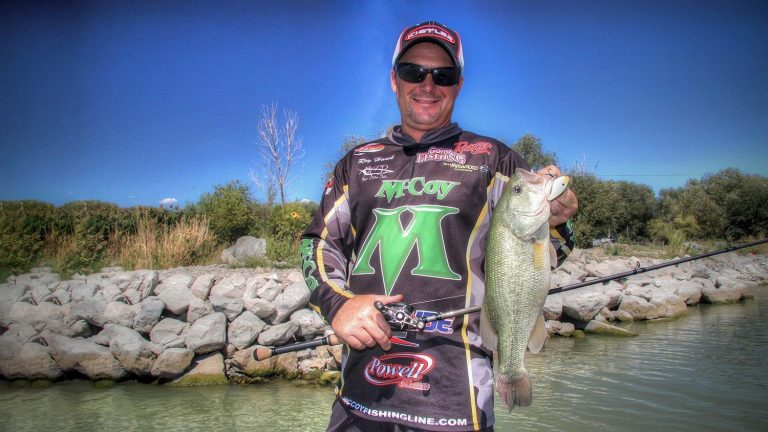 Finding the best fishing spots involves putting as many of the odds in your favor. So you’re looking for as many factors in one area to make it better than the rest for fishing. Western pro Roy Hawk is a mellow fellow, so when he told me we’d be looking for high-energy bass fishing spots on a recent outing, I was intrigued.

Actually, our day on Utah Lake was pretty low-key, but the “high energy” thing made perfect sense. This relatively flat, often muddy lake south of Salt Lake City, presents a challenging bass fishery; but that’s what made it an effective palette upon which to paint a lesson of likelihood.

Using this lake’s examples, our goal here is not to build a comprehensive directory of every possible sweet spot. Conversely, we’re not including screamingly obvious bass magnets such as tailraces.

To “Goldilocks” this thing, we’ll aim for something in between; something that’s just right. 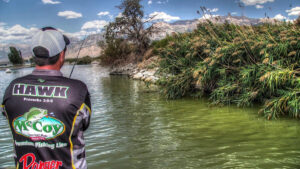 During that late summer day on Utah Lake, my host, along with his eldest offspring — and Forrest Wood Cup co-angler champion — Sunny Ridge Hawk, caught plenty of largemouth bass, along with several nice whites. But in the interest of brevity – and the inclusion of other examples – we’ll save the blow-by-blow storyline for another time.

Instead, let’s look at Utah Lake’s high-energy spots and how their logic can apply in locally-appropriate fashion to your favorite bass waters.

Utah Lake is fed by two prominent rivers, the Spanish Fork (central east side) and the Provo (northeast) – along with a few smaller streams. The water drains through the Jordan River at the north end, where a pumping station regulates the water level.

As Hawk explained, these are the lake’s top-tier spots for concentrated opportunity. Cooler water, higher oxygen levels, baitfish gathering and of course, current – these are the features and benefits of an easy sell.

On a smaller scale, Hawk also pointed to the back of Saratoga Canal on the lake’s west side where a couple of natural springs bubbled through shoreline vegetation. Such subtleties can be real sleepers, but when the bite is tough, looking for the often-overlooked can be a serious day-maker.

The same applies to drain pipes — above or below the water line. It’s easy to assume that bass orient to the outflows because these conduits wash food items into the lake — and that’s not incorrect. However, look closely and you’ll often see baitfish clustering near moderate flows.

Native forage attracted to the bounty of food particles washing through the pipe won’t go unnoticed by bass, so never ever miss the opportunity to cast at one of these action factories. 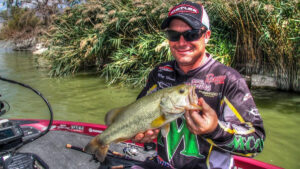 As we entered one of Utah Lake’s many marinas, Hawk worked a squarebill along riprap overhung by willows. After bagging a couple decent largemouth, several whites and one hostile bluegilll, he made an astute observation: The willows were full of Mayflies and when insects dropped onto the water, bluegill and white bass were quick to capitalize. Not surprising, then, that opportunistic largemouth were quick to capitalize on their prey’s self-serving distraction.

Hawk’s best two fish came off the edge of a small paved ramp at the back of a marina. A couple more were sitting high on riprap points. This shallow zone was probably warmer than the fish liked, but as Hawk noted, appetite occasionally pushes bass beyond their comfort zone.

With most of the lake muddied by windy conditions, the combination of shallow water and hard structure provided the fish two necessary elements — visibility to spot forage and a sideline against which they could corral their prey.

Here’s the logic: Sometimes, your high percentage areas are defined relative to a fish’s positioning. For example, low visibility keeps strike zone tiny. Figure out where this window is located and repetition can be as important as bait choice.

“This fish were in less than two feet of water and we were a little more focused on making more accurate casts and casting multiple times because the strike zone is very, very small,” Hawk said. “The reason the strike zone is so small is the turbidity of the water. You have to get that lure within one foot of the fish basically every time.”

As Hawk explained, a laydown or some other hard target might merit three or four casts, but in this situation, we were looking for targets that might be 6 inches wide.

“It’s little tiny indentations, little areas where a limb sticks out – it’s micro stuff we’re casting at,” Hawk said. “That’s why, in these conditions, if you make multiple casts to the same stretch, you’ll finally get that bite.”

Looking beyond Utah Lake, we can round up another handful of high-energy, or perhaps high-percentage areas. Consider these examples and how they might inspire recon efforts on your favorite waters:

Strike King’s Phil Marks knows that wind-churned shallows are flush with oxygen and thereby attractive to baitfish. Expecting bass to home in on the buffet, especially during the fall feed-up that’s just around the corner, Marks hits the windward side of a flat with a mix of spinnerbaits, square bills and topwaters. Complementing these reaction baits, he’ll flip any isolated wood cover he encounters to clean up the spot.

Loners: Wally Marshal may be known as “Mr. Crappie,” but he shared a piece of wisdom with clear applicability for bass.

“If you see a small limb breaking the surface, there’s probably an entire tree below the surface where you can’t see,” Marshall said.

“If I find one boathouse in the back of a pocket, I have to run back there and fish it because that’s often where a big fish lives,” he said.

During a recent morning on Central Florida’s famed Lake Toho, Bassmaster Elite Series pro Cliff Prince made a quick stop on a set of power line poles crossing the lake. We were in an area with almost no vertical structure, so these poles, he said, occasionally attract a few sitters.

FLW pro Pete Ponds notes that the fish tend to favor a particular area of the submerged or semi-submerged structure. Depending on fishy factors such as wind, sun angles and water temperature; that could be the deep end or maybe a broken section.

Ponds’ tip: Make that first cast count, as the spot boss usually takes the first shot at any crankbait or topwater. Miss the opportunity, and you’ll likely have to settle for underlings.

Shell bars scattered throughout the shallow flats of river systems like the Arkansas aren’t exactly news flash material; however, they can be easily overlooked when anglers become fixated on more conventional thoughts.

Case in point: During a recent event on Lake Dardanelle, FLW Tour pro Kerry Milner found several key bites on shell bars scattered amid brush piles. With many of his competitors targeting the latter, Milner found that the fish were leaving the tangled branches and settling on nearby shell beds.

From the California Delta, to the Potomac River, grass beds hold loads of potential for everything from frogs, to Chatterbaits, to flipping jigs. Massive banks of hydrilla, milfoil and the like understandably attract plenty of attention, but your larger bass often stake out the less obvious and therefore less trafficked areas of vegetation detached from the rest.

This notion can easily pull us into another expansive topic meriting deeper discussion. But let’s leave it with this thought: Learn to trust your electronics as your underwater eyeballs.

Interpreting contour features, finding those drains and current breaks, marking bait — these are the ingredients in your recipe for success.

Find those areas abounding with energy and attraction, and you’ll shift the percentages in your favor.