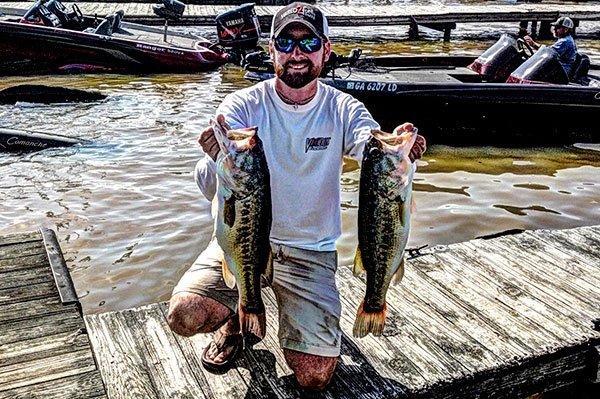 I have fished very few bass tournaments in the past few years. I took it seriously in college and to be totally honest, I got burned out with it so I took a little hiatus. Iâ€™m not overly competitive when it comes to bass fishing and my interests have taken a hard turn towards teaching folks how to fish. I get a lot of enjoyment out of it and I donâ€™t have to front a bunch of money to do it. For someone like me who is financially frugal, itâ€™s a win-win.

This past weekend, however, I jumped into the biggest team trail event in my stateâ€”Berryâ€™s Tournament Trailâ€”on Lake Sinclair and fished it by myself. Iâ€™d been catching the snot out of â€˜em, so I figured Iâ€™d get out there and enjoy the day. Long story short, I won the dang thing with a 20.61-pound bag.

Now, Iâ€™ve weighed bigger bags before but this one meant the most to me. Not because of the money, plaques or bragging rights. I donâ€™t buy into all that stuff. The adjustments and decisions I made throughout the day are what made it so special.

Everyone approaches a tournament differently. Some anglers like to catch a â€œquick limitâ€ before pursuing bigger bitesâ€” not me. I think thatâ€™s a short-sighted strategy in most cases, especially this time of year.

For whatever reason, whether itâ€™s the moon phase, feeding periods, tidal vortexes, star alignment, wind temperature or color of your boatâ€”Iâ€™m kidding, by the wayâ€”big fish eat in the mornings. Yes, I know you can catch â€˜em any time of day, but this time of year, the fat girls are chewing when the rooster crows. Thatâ€™s just how it seems to work out.

I decided to head straight to my primary big fish area first thing in the morningâ€”in the previous few weeks, Iâ€™d caught at least 15 bass weighing over five pounds from this area. Itâ€™s one of those magical spots that looks like absolutely nothing. Iâ€™m sure other anglers thought I was crazy for fishing such an ugly stretch of water.

I bypassed all the areas in which I could catch an 8-pound limit and went straight to the juice. Within the first ten minutes, I had a 3.5 and a 5.73-pounder in my livewell. Say what you will, but there ainâ€™t a better way to get your blood flowing before 7:45 in the morning.

Capitalizing on your big fish areas early in the day helps you relax. It lets you know youâ€™re doing the right thing and gives you a ton of confidence to build on throughout the day. Your breaths get deeper, your jitters go away and youâ€™re in the zone.

Conversely, if you donâ€™t catch â€˜em first thing in your best areas, you have plenty of time to adjust your game plan. The entire day is ahead of you and you can think methodically and weigh different options without feeling rushed or panicked.

Give â€˜em an honest chance

If you have a few different areas that are pumping out big fish, donâ€™t give up on them too early. Iâ€™ve fished with a lot of folks in the past who act like absolute nut jobs for the first few hours of the tournament. If they donâ€™t catch a giant within the first five minutes, theyâ€™re mentally done.

Rememberâ€”you have eight hours to fish. Thatâ€™s a long time. Youâ€™re not fishing the Bassmaster Classic or competing for a six-figure payday. Just relax and take your time. Itâ€™s supposed to be fun.

I gave my big fish areas a lot of time to develop in this tournament. I knew from previous experience they could light on fire within a five-minute period, so I hunkered down and willingly committed the first half of my day to them. This type of strategy takes a lot of patience and confidence, but it can pay huge dividends if you play your cards right.

I had been catching some giant bass in four different areas, all within sight of each other. They werenâ€™t big areas, eitherâ€”they were roughly a boat length-wide. Iâ€™d fish each spot for roughly 30 minutes before rotating to the next one. I knew I wouldnâ€™t get a lot of bites but with 58-degree water temperatures, there would be bigguns moving up and coming to me throughout the day. Whether or not I caught them, however, depended on my timing, which is why I rotated so frequently. You can blank on your first pass and whack 26 pounds the next time you hit it.

I also went to great lengths to saturate each area as thoroughly as I possibly could. The fish werenâ€™t too aggressive, so I made sure to land every cast within six inches of the previous one. To be quite honest, I was bored out of my mind. The action had died down significantly and I was looking at the same stuff for the entire morningâ€”the same dogs, same docks, same seawalls and the same houses. If I didnâ€™t have confidence in these areas, I would have lost my mind.

This strategy, however, served two purposes for me. First of all, I wasnâ€™t blindly slinging lures around all day hoping for a big bite. I knewâ€”or at least thought I knewâ€”the fish were there. I just had to make them eat. Most importantly, however, it helped me fish with a clear conscience. If I didnâ€™t catch them, I wouldnâ€™t have any regrets at the end of the day.

Go with your gut 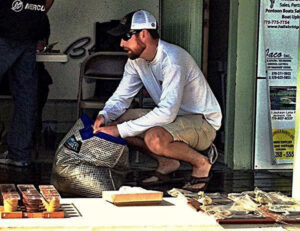 I fished the tar out of my big fish areas until 1:00 in the afternoon and the only other fish I caught was a 1.02-pounder according to my Rapala scale. It wasnâ€™t happening and I wasnâ€™t really sure why. One thing I did know, however, was that I had to make an adjustment. I was bound and determined to win this tournament but I found myself becoming stubborn and relying on history too much. Something had to change.

When I fish alone, I pray a lot. Iâ€™m an unapologetically God-fearing man and it helps me relax throughout the day. I found myself praying out loud, â€œLord, Iâ€™m not asking for fish or success. Please help me trust my gut and fish with a clear head.â€

A few minutes later as I was struggling to make a decision, I got an overwhelming urge to flip a laydown I found up the river while I was practicing. Strategy-wise, it didnâ€™t make any sense. It was a 20-minute run in the opposite direction of the ramp. But this laydown was in a perfect prespawn area and I knew, without any doubt, I could go flip up a biggun out of it.

So off I went. It was so hard to leave my big fish areas, but I had to do it. I wouldnâ€™t have been able to sleep at night without flipping this stupid tree.

When I finally pulled up to the tree, I flipped into the middle of it and felt one of those â€œpeck, peckâ€ bites that bluegill are famous for. Before I could even move my rod tip, she went Donkey Kong on it. My first flip after making this huge gamble resulted in a 5-pounder.

Whether it was pure luck or instinct, Iâ€™ll never know. But that 5-pounder gave me the shot in the arm I needed so badly. I made a huge gamble, it paid off and now I had the confidence to keep trusting my gut for the rest of the day. With one flip, I went from spun-out to having a chance to win.

Iâ€™m the worldâ€™s worst at this when I fish tournaments. There will be a spot Iâ€™m dying to hit but itâ€™s too far away and I donâ€™t feel like getting pounded to death by boat wakes to get there. Itâ€™s a lazy thing to do and it stems from a lack of confidence in my opinion.

I wasnâ€™t playing that game. One more big bite would win. Iâ€™d already proved my instincts right once by running up the river, so I was fully prepared to take another gamble at the end of the day. This one, however, was even harder for me to take.

Remember the area in which I started? The one that produced two good fish first thing in the morning? Yep. I wanted to go back. Something inside of me was telling meâ€”no, actually shouting at meâ€”to go back and try a different presentation in the same area. It was 3:10 and I had to weigh be back at 3:45. I would have time to make two, maybe three casts.

After another spine-cracking, 20-minute run, I pulled up the area. Everyone was running the opposite direction to get to weigh-in and this ding dong was trying to squeeze in a few more casts. But it didnâ€™t matter. My old competitive spirit came back to me and I was Hell-bent on winning.

I picked up a different rod, fired a cast and saw my line slowly move about three inches to the right before getting heavy. I laid into her and sure enough, a 6-pounder came tail-walking across the surface. I scooped her up, culled that pesky 1.02-pounder with her and bolted back to weigh-in. I made it with about five seconds to spare.

There are still good folks out there 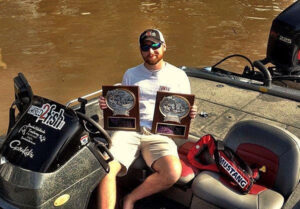 One of the primary reasons I quit fishing tournaments a few years ago was due to the lack of manners and humility I began to notice. There are a lot of outstanding people who fish tournaments but Iâ€™ve also met some who have really disappointed me. The cutthroat attitudes, lack of fellowship and the â€œmy boat is faster than yoursâ€ attitudes really turned me off from it. I just wanted to go fishing and have a good time but it was becoming difficult for me.

I just told you that for a reason.

After I took the mandatory polygraph test and accepted my check and plaques, my faith was restored in a monumental way. There was a line of fellow anglersâ€”some who Iâ€™ve never met and others who are of legendary status around hereâ€”waiting to shake my hand and congratulate me. There were no smug grins, dirty looks or painfully obvious whispers. Just a bunch of stand-up fellow sportsmen who wanted to tip their cap to me.

There are always going to be a few â€œbad applesâ€ in every group of people but we shouldnâ€™t let them ruin our opinion of everyone else. Iâ€™m not afraid to admit that I was guilty of it during my tournament hiatus. But I have a new perspective on things after the way these gentlemen acted. If you were one of those people who congratulated me, thank you so much for further opening my eyes to the pure goodness in this sport.

The next time you fish a bass tournament, try to apply some of the strategies I learned this past weekend. If you can hit your big fish spots first and give them a chance to develop, go with your gut feelings, be proactive and aggressive the entire day and be humble in both your victories and your losses, youâ€™ll enjoy tournament fishing a lot more.