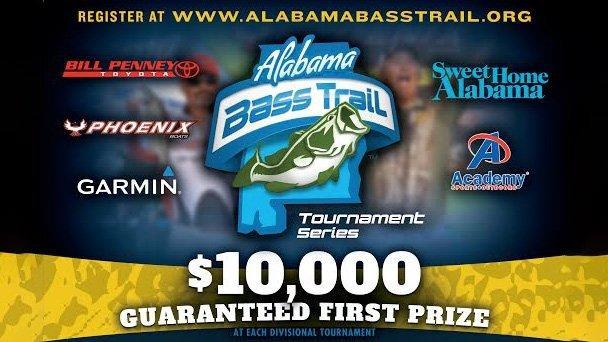 The Alabama Bass Trail, the largest team bass fishing tournament trail in the state of Alabama, announced its 2016 tournament schedule. The 10 lake team-style tournament series will be held on ten lakes beginning Feb. 20, 2016, with the championship tournament to be held on Lake Eufaula on Oct. 7-8, 2016.

â€œThe Alabama Bass Trail tournament format has been wildly successful, pulling anglers from six states for two years consecutively and creating an economic impact of over $2.5 million in the areas around the Trailâ€™s lakes,â€ said ABT Program Director Kay Donaldson. â€œI am so proud of what our state has accomplished while promoting the sport of bass fishing. We have showcased these lakes to the world and provided a needed boost to the local economies. We are extremely excited to take tournaments to some new locations in 2016.”

The tournament trail contains two divisions: North and South. Each division is made up of five tournaments on five different lakes. Maximum number of boats for each tournament is 225. In 2016, no single entries will be allowed. Teams must fish in all five tournaments in their respective division.

Hosted by the Eufaula-Barbour County Chamber of Commerce, the championship tournament is set for October 7-8, 2016 on Lake Eufaula.

Anglers who fished all five events in their respective divisions in 2015 will be given a priority entry period from August 1 to August 14, 2015 to register online at www.alabamabasstrail.org.

Registration will be open to the public on August 15, 2014. Entry fee per tournament is $1250 per team, which includes registration for all five tournaments in respective division.