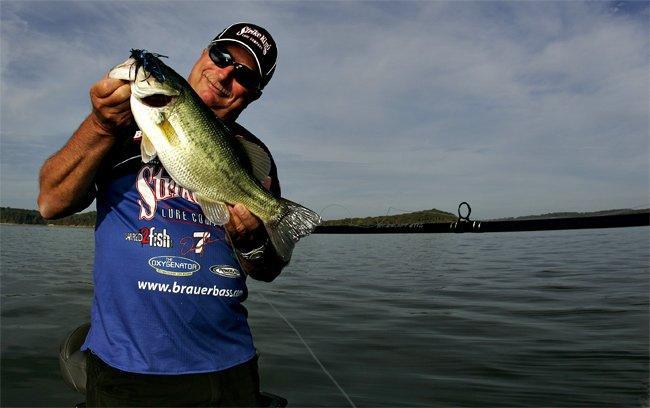 Greg Hackney and Denny Brauer might just be the who’s who of fishing jigs. Of course most of the guys that fish at the top level know a lot about jigs and are accomplished anglers having won a lot of money with jigs. But when you talk about fishing jigs in heavy cover and now after Denny’s win on the Arkansas River last year on the Elite Series, you’re also talking about fishing jigs offshore

“I rarely fish a jig right out of the package,” Brauer said. “That doesn’t mean they aren’t good right out of the package, but guys have a lot of personal preferences. When you go changing a jig to fit one guy’s personal preference, your product doesn’t fit the general public. So you leave it as is when you package it, and then guys can make them better suited to their own liking.”

That’s a great way to look at it. The tool is provided to you. How you employ the tool is just as important. And we all like to tinker with the original to see if we can make it a touch better and maybe hook one more bass that we missed or land a few more bass that got off. Truth of the matter is we put a lot of advantages in our favor when it comes to rods, reels and line, and we should be the same way about the lures.

A jig seems like nothing more than lead and dressing, but when it comes to  customizing, it’s one of the most complex lures.

As you can see, a lot of variables go into the make-up of your jig. Many folks have come up with systems for modifying their jigs, but we found it interesting that two of the biggest names in jig fishing seem to prepare each jig relatively the same. 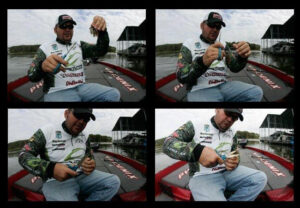 Hackney pulled out a Strike King Hack Attack Flipping jig from a package and walked us through how he likes to get it ready to fish.

The first thing he did was pull the jig skirt and snap it loose. You want all the strands to be separated. Sometimes the skirt tabs don’t separate completely, and you want the strands to be independent and not three or four stuck together as they won’t move as freely when you crawl or shake it.

This trimming made the skirt strands flare and expand more away from the hook where they had been laying more flat against the hook when they were longer.

“I want my skirt to be just past the hook so when they go to bite the jig, they will get the hook most of the time too,” Hackney said.

Next, he went to work on the weedguard. He cautioned about shortening the guards.

“I see a lot of guys shortening the weedguard on their jigs thinking they are making it easier to set a hook on a fish,” Hackney said. “What they are really doing by cutting that weedguard short is making it a lot stiffer. If you want to make it a little more limp for better hook penetration, you just need to take a few strands out.”

With three or four fibers of his weedguard separated, he trimmed them at an angle from the jighead toward the end of the weedguard. He was careful not to pull the fibers out as that can sometimes loosen the whole weedguard, and they can pull out. At least he’s seen that before on cheaper jigs, and so he’s careful not to ruin the weedguard now on all his jigs.

Once he gets the strands and weed guard like he likes them, he puts a Strike King Rage Craw or KVD Perfect Chunk on the jig. Instead of hanging the chunk on the hook by running the point perpendicular across the chunk. He takes and threads it onto the hook an inch or so and slides it up all the way underneath the skirt.

Brauer does the exact same thing with his jigs and talked about why he did that.

“I’ve had times where a fish bit, I set the hook and brought my jig back, and the trailer that was hanging on the end of the hook spun around and stuck over the hook point and made it harder to get a good hookset. So now I thread my trailers on the shank of the jig to keep them compact and out of the way of the hook.”

Other modifications we’ve seen pros make include pulling bright accent strands off in clear water to make the jig more natural. Anglers will also trim the strands above the collar until they are just 1/4 inch or 1/2 inch to give the jigs a more small finesse profile in clear water. Then couple it with a small profile natural looking craw trailer to give the jig a real natural clearwater appearance.

Jigs are one of the few lures that work January to December and in 6 inches of water or 60 feet of water. You can modify them easily to fit most situations. In most tournaments these pros have various jigs tied on in various styles and colors.

Brauer likes to prep his jigs before he starts fishing, trimmed and ready for action. Some anglers like to prepare the jigs individually for the fishery they are on and the conditions they are facing. Experimenting on your own is always the best advice. Try different trailers, different sizes and different colors at different times of the year and learn what changes make your jigs more effective.

Realize the jig is a great option that can be made into a perfect bass fishing tool with a small amount of forethought and effort. 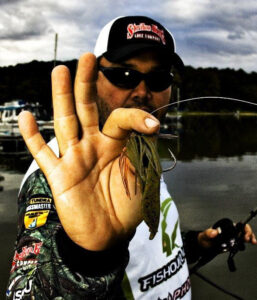