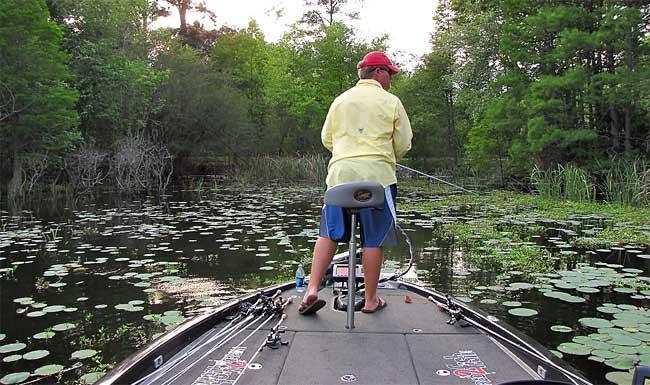 Anytime I can go to a body of water, throw a frog all day and know that I have a shot at the win, I get pretty excited. So when I saw Santee Cooper slated for late April, I started feeling froggy. I had only been to Santee once to fish a college event a few years ago, but it was love at first cast and a place that I have since wished I could spend more time.

Upon arrival, I took my dad, and practice partner, to a place I had picked out on Google Maps for the College Fishing event in 2009. There were some quality fish in the area back then, and I figured it was as good a place as any to start my EverStart practice.

After about 20 minutes of watching my little frog scoot back to the boat unmolested, I had three bites in rapid succession. The first was a 3-pounder and the next two each tipped the scales at 7 pounds.   I looked at dad and said, â€œThis one is going to take some weight to win.â€

As you could expect, however, after such an explosive start, the productivity of my next four days of practice did slow down substantially. I found about five or six areas where I thought I could get a bite or two fishing the frog. But if I got bit, it was usually in the 3-to-7-pound class. I never had a single fish in practice swirl on the frog and miss it or wake up behind the bait. The first sign that a fish was in the area was a loud eruption followed by the disappearance of my little amphibian lookalike. The frog fooled the fish, and they were going to eat it.

I found fish in all types of vegetation and even in the famed cypress trees that litter the two lakes that make up Santee Cooper. From shoreline grass to matted weeds and dollar lilies to full blown lily pad fields, the better bass were sprinkled around all sorts of stuff. The areas basically all had only two things in common: clear to slightly stained water and thousands of fry.

The fry were probably the biggest indicator that I was in the right spot. Fry can only swim so far, so fast. So it makes perfect sense that if you are around fry, the big bass that birthed them probably arenâ€™t far away. I did catch some fish throughout practice relating to the fry, both guarding them and feeding on them, but they were usually bonus fish and only in the 2-to-3-pound range.

The better bites on the frog came from daylight until about 10 a.m. and 4 p.m. until dark. Once I started to develop a pattern around the frog, I kept one in my hand for about 85 percent of practice. My dad, who is a far better fisherman than me, followed up with an assortment of other offerings with very little success. Senkos, swim jigs, spinnerbaits, worms and so on just didnâ€™t do the trick for the particular fish that we were targeting.

On the heels of the shad spawn bonanza at Lake Seminole, I also kept a watchful eye out for any signs that one might be happening on Santee. The water temp had locked in to the ideal 70 to 75 degree range and a new moon was rolling in the day before the event was scheduled to begin. So all signs pointed to the shad spawn being a major player.

And I actually found one on the last day of practice. The biggest I had ever seen, it covered about an acre of dollar lilies in 3-to-4 feet of water. Thousands of shad frothed the water. Only two problems: it was over with at 7:30 AM (within an hour of take-off) and there were very few bass in the mix. With no more practice days to check up on the area I opted not to make the 15 minute run during the tournament hoping that the bass had found them.

At the beginning of practice I started to monitor the weather and saw that a cold front was headed our way and would likely arrive on the day before our tournament. In every other topwater situation I have ever been a part of, cloud cover always helped the bite. So going into day one, I felt extremely confident that I could throw a frog all day and stand a good chance of getting the bites I needed.

Day one began with a light rain, a lot of clouds and a 30-minute fog delay after which we all sped off to our starting spots still tied for the lead. I started where I had started my practice. My first bite came right beside a clump of reeds. The bass swirled on the frog but never pulled it under. I pitched a wacky-rigged worm to where the swirl was and before the bait could hit bottom my line cut out. I stuck the fish and got it nearly to the boat before it jumped and returned my bait to me, though Iâ€™d have rather let her keep it just a little while longer.

No sweat. It was just a 2-to-3-pounder. At least it wasnâ€™t a big one I told myself. Then a few casts later a large wake came up from about 5 feet away and fell in behind my frog. I gradually slowed the bait to a crawl, finally stopping it entirely ten feet from the boat. The fish pulled it under and I had her for about 5 seconds. Just long enough for her to reach the surface and let me get a good look at her. My hook popped out and went over my head as the 5-to-6-pounder swam away.

I wonâ€™t bore you with the details of the sob story that ensued, but the rest of the day went the same. I missed opportunities with four more kicker fish and 10 to 12 blowups that never connected, nor acknowledged the follow up attempt of the wacky rig. I was never able to find a bait that I could fish through the thick vegetation, and still garner the strikes. I finally boated two keepers for 5 pounds in the last 7 minutes.

Day two was identical in almost every way. Overcast all day, several quality bites, and only 5 pounds to show despite all my best efforts. The only real difference was the hookup percentage. I hung and lost several nice fish on day one. Day two I couldnâ€™t even hook the fish to start with. I had 15 to 17 bites and only hooked three. Those three I caught, two on a wacky rigged worm and one on and Jackall Iobee Frog.

In a tournament that I had hoped to make a deep run, I finished a dismal and disappointing 88th. But I wasnâ€™t alone. Several other anglers admitted they were on big fish with a topwater bait and for whatever reason the bite went sour. Stories of lost fish and missed opportunities filled the air, even more so than usual.

After listening to some of the leaders who were local to the area, I learned that the bass just bite a topwater better on Santee when itâ€™s sunny than they do when itâ€™s overcast. Well thatâ€™s good to know but it would have been much better financially to know that a few days earlier. I also wouldnâ€™t have wasted a prayer to the fish gods that the cloud cover would set in and hang around. Some lessons have to be earned to be learned I guess.

I also think that some of the fish I was targeting went on bed. About half of the fish I caught in practice were prespawn and the other half post spawn. The location of a lot of the bites I had made me think they were bedded down and only attempting to scare off the frog. Once I started to realize this on day two, I began pitching the weightless wacky rig around and caught two keeper males. However, fishing a wacky rig is painfully slow and something in which I donâ€™t have any confidence.

That wasnâ€™t the case for the leaders, however. They had a lot of confidence in the slower presentations and knew exactly where to use them. Most of the guys who finished well relied on either wacky rigged or Texas rigged soft plastics fish around cypress trees and docks. Some caught fish early on reaction baits like a frog or Skinny Dipper but the bulk of the top 10 did their damage slow and steady.

The shad spawn, though it had begun, didnâ€™t seem to be any of the contendersâ€™ primary pattern. Most of the sight fishing was hit or miss and only produced a keeper or two for the higher finishers. With so much water available, I spent very little time on the lower lake, Moultrie. Knowledge of what it had to offer put several of the anglers into the top 10.

Although it was one of the most disappointing tournaments I have ever had, I still love the lake. I had a blast during practice at least and learned a lot throughout the tournament. My hats off to all those who outsmarted the Santee bass. On to Guntersville next week for the last stop of the Southeast Division EverStart Series. Still feeling froggy!