The topwater bite has been pretty solid for me lately, so I’ve been testing a bunch of different topwater lures in recent weeks. One lure that has certainly separated itself from the crowd is the V&M Buzz Shad. I fully expect this buzzbait-swimbait hybrid to catch a lot of big bass for anglers this year.

Buzzbait-style topwaters are known for getting gunked-up in the thick stuff, but if you can get a few clean retrieves in heavy cover, there’s a high probability of getting a big bite. Because weedlessness is a big deal to me in topwater lure, I took the V&M Buzz Shad straight to some fisheries with a great deal of vegetation. 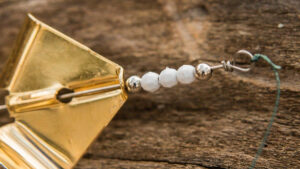 My findings impressed me. If you look closely, you’ll notice several beads in front of the blade of this lure. They’re not for show—they actually help protect the blade from getting clogged up with grass strands. Of course, you won’t be able to throw this thing in a big grass mat, but it’s an outstanding choice when you’re skirting the outsides of grass lines. Very rarely have I found myself picking grass from the blade.

It also comes through hard cover well. I have no hesitations when it comes to reeling this lure through the heaviest part of a laydown. You can bury the hook in the swimbait trailer and it will skip and jump over exposed limbs with little hassle.

Some baits have drawing power—the ability to attract fish from a distance—and some do not. I have found that the Buzz Shad is quite potent, even when you’re not within a few inches of the fish. I’ve seen several fish wake towards this lure from several yards away before attacking it.

The blade of Buzz Shad doesn’t clack or squeak, but it comes with a V&M Hightail Shad Swimbait trailer. I believe the trailer makes a noticeable difference. 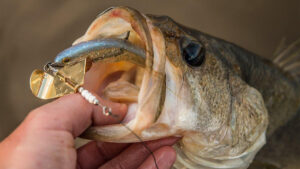 The Hightail Shad’s body is much slimmer than many of the swimbaits I’ve tested, which allows for a very natural action. It’s not the normal thumping action you’re used to seeing in a lot of swimbaits—the whole body violently rocks back and forth. In my opinion, the blade gets the bass’ initial attention and the Hightail Shad finishes the job by further adding to the lure’s overall realism. 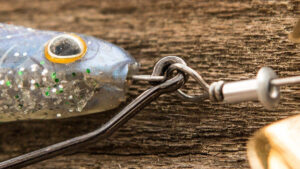 Anytime I’m using a jointed topwater lure with a free-swinging trailer, I pay close attention to the number of wasted casts I have. I think you know what I’m talking about: When you make a near-perfect cast only to find the bait has somehow fouled and completely ruins your chances of catching a bass. 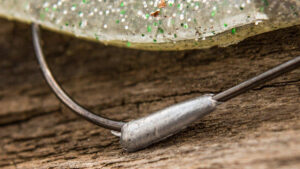 I can count the number of my wasted casts with the Buzz Shad on one hand. It doesn’t kink or tangle easily—even in a stiff breeze—which allows me to take full advantage of pinpoint casts. The Hightail Shad trailer also maintains an upright position, so you won’t have a bunch of unnatural spinning and flopping around throughout your retrieve. 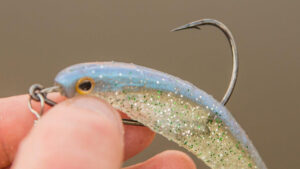 The Buzz Shad comes standard with a 5/0 Mustad Ultra Point frog hook, so you won’t have to worry about bending or flexing when a big bass eats it. I’ve been primarily using this lure on heavy braided line and have yet to notice any loss of structural integrity. You should have no problems wrenching fish out of tight places, even when using heavier tackle.

This type of lure usually isn’t my cup of tea, but I’ve been pretty excited by its effectiveness. Whether you’re fishing big reservoirs or small ponds, I think you’ll have a lot of success with this unique topwater offering.

The V&M Buzz Shad is available at TackleWarehouse.com.