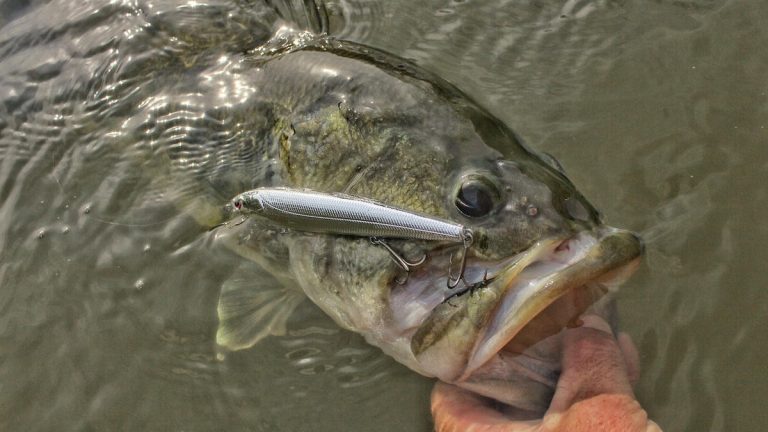 So this review was pretty fun to do, because it introduced me to wake baits. I’d known about ’em most of my life but had never really given them much thought. I don’t really know why either because they set up perfectly for what I cut my teeth on growing up and what I still really like to do and feel the most comfortable doing… which is power fishing in shallow water.

I guess I just already had a few things that worked well like walking and popping-style topwaters and thought a wake bait was just interchangeable with those. But I’ve found rather quickly that wake baits have a particular appeal all their own. They also catch big ones, as was made evident to me by the 7-pounder in these pictures which was actually my first catch with this lure.

Let’s start off talking about the SPRO Zero Minnow 130 by telling that story now. 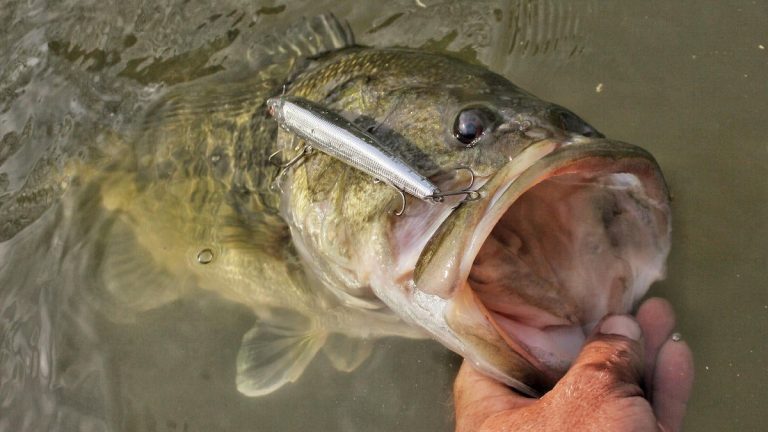 So I tied on the SPRO Zero Minnow 130 to test it out for this review, threw it a few times and then set it down to pick up another bait I was also testing out. As I was going down the bank, I noticed a fish swirl up near a drainage pipe and figured it was on bed. The fish were spawning in the area, so instead of bombing the big swimbait I had in my hand up into super shallow water, I picked the wake bait back up and fired it a foot or two past the bed.

As the bait hit the water, it sank down a couple inches and then popped back up. Just as it broke the surface, I gave the bait a twitch towards the bed and this big girl annihilated it. Then the battle was on. And this is where operator error about cost me. Again, I was sampling several baits for upcoming reviews. So I just tied this bait on a rod not really suited for this style of fishing – a 7-foot heavy-action rod with 17-pound fluorocarbon. Not ideal at all.

The fight was tremendous as would be expected. I could tell the fish was big and could see the whole chrome bait shining in the water so I knew the fish had just swiped at it and been hooked all outside the mouth. Before I could back off the drag, the fish had made a big run. When I finally got it to the boat, I found that two of the hooks had opened up a good bit. But this wasn’t the fault of the hook at all. I actually like the ones on this bait, so let’s talk about those now and what I should have done differently. 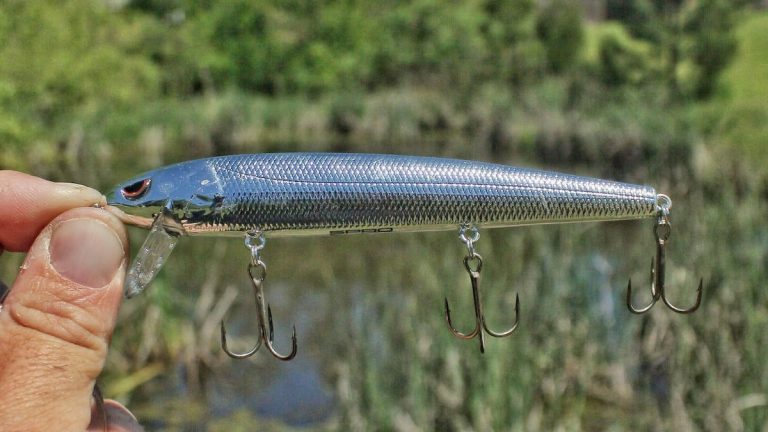 These Gamakatsu hooks are sharp, stout and have a round bend with a normal-length shaft. I like hooks like these on topwaters compared to short shank triple grip style hooks because they offer a better chance of doing exactly what these did, hooking a fish even if it just swipes at the bait. The fault was not with the hook, but my choice of accompanying equipment.

The heavy, low-stretch fluorocarbon I was using along with the stiff rod was way too much for this presentation. Ideally, you’d want to go with something like 15- or 20-pound monofilament paired with a 7-foot medium-heavy action rod at most. Or possibly even 30-pound braid with a 7-foot medium-action rod. If you did go with braid though, you’d want to make sure you back off the drag as the fish nears the boat to also prevent opening up the hooks on a big one since the braid has near zero stretch.

Also, both braid and monofilament lines float, where the fluorocarbon I had on sinks and pulls down on the nose of the bait. This impedes the action and is another reason I should have been more careful instead of just grabbing for a rod to tie this bait onto. Let’s talk about that action some more though. 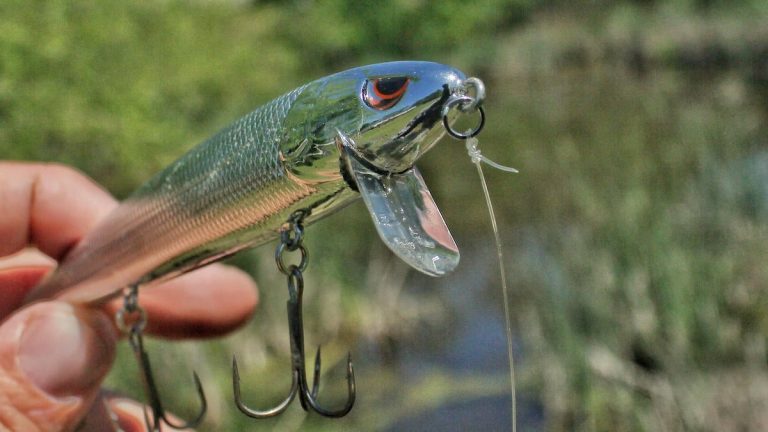 What I believe is so compelling about the SPRO Zero Minnow 130 is that slightly subsurface action that just screams for a bass to bite it. The bait wobbles and swings back and forth just below the surface, pushing a nice little wake and perfectly imitating a struggling bait fish winding down on its last few seconds of life.

Accompanying that action, the Zero Minnow 130 has a great rattle system that lands somewhere between a low, one knocker-type sound and the sound that a bunch of little glass beads would make. It’s not super loud but not super sharp either; just a nice, rolling knock that lulls me into a trance as I wait for a big one to interrupt it. I’m telling y’all, man… I’m digging this style of fishing.

What I also found with the Zero Minnow 130, as I was fishing it primarily around spawners, is that it is a really good search bait. Bass on bed may not commit to it all the way, but they’ll roll on it and reveal themselves. Then if you have something like a wacky rig on deck for a follow-up bait, you can fire that back in there and pick those fish off. But you can cover a lot more water with the wake bait as opposed to just fishing a wacky rig down the bank.

I also am already thinking about other ways to use this bait throughout the year. As I stated at the onset, a wake bait is great for shallow power fishing. It actually gives me something that’s kind of a sweet mix of finesse and power. But it’s also going to be a great bait for fishing for schoolers over a hundred feet of water in the summer and various depths in the fall.

It’s just a really cool bait that again, I’m ashamed to admit it, basically opened my eyes to a whole genre of baits that I’ve completely missed the boat on even as much as I’ve fished over the years. So whether you’re already a big fan of wake baits or you’re like me and think you might be missing out, I highly suggest giving the SPRO Zero Minnow 130 a try. Just make sure you start off with the right gear. Best you learn that lesson from me and not a close call or missed opportunity of your own.