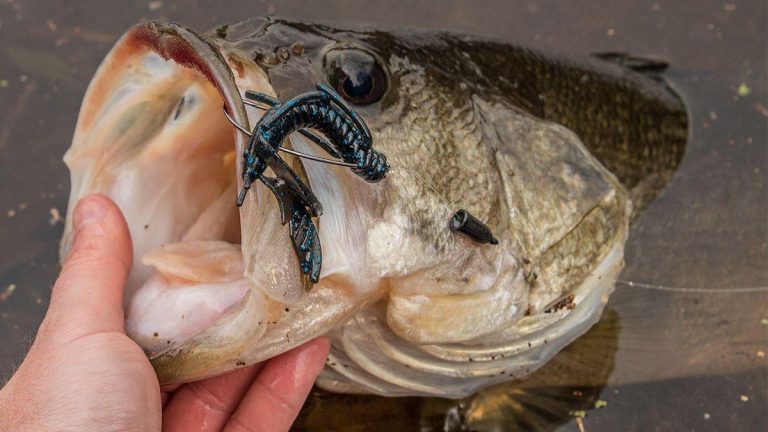 It takes a lot to get me excited about a soft plastic bait. I’m not saying that to sound pretentious or anything, but let’s be honest with each otherâ€”the market is inundated with a lot of baits that look, act and perform nearly the same. So I make a concerted effort to let our readers know when a unique and fish-catching soft plastic is released.

I’ve been testing the Netbait Paca Slim for several weeks now and I’ve come away with a huge appreciation and respect for this bait. It looks incredibly simple, but there’s much more to it than meets the eye.

Measuring 3 1/2 inches in length, the Paca Slim is a relatively small bait that rounds out Netbait’s lineup quite nicely. Its four legs, short antennae and two claws give it a nice, streamlined profile that works incredibly well when pitching and flipping heavy cover. It penetrates vegetation and gnarly limbs with ease, allowing you to cover water quickly and efficiently. 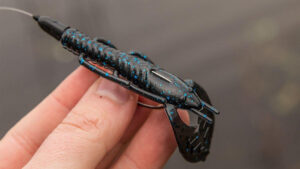 Even on a not-so-good cast, the Paca Slim enters the water quietly without much of a splash which can pay big dividends when fishing ultra-shallow water. Due to a lack of long, obstructive appendages, it’s also very easy to skip into tight placesâ€”it slides across the water’s surface like a river rock, to be honest. It casts excellently with casting gear but its thinned-down profile also makes it quite manageable for those who prefer spinning gear.

You’ll also be impressed by its durability. It holds up excellently to repeated skips, flips and pitches without constant re-rigging and more importantly, it withstands multiple fish catches without any issues. So far, I’ve been able to catch 6 bass on a single bait without losing any appendages or claws. That’s excellent value, in my opinion.

I won’t beat around the proverbial bushâ€”I have absolutely wrecked ’em throughout the entirety of my testing. I’ve been on a decent reaction lure bite lately, but it quickly disappeared due to multiple cold fronts and falling water levels. So I figured the tough conditions were ideal testing grounds for a small soft plastic like the Paca Slim.

This is a versatile bait that can be fished in a number of different ways. I’ve fished the Paca Slim on shaky heads, Carolina rigs, on the back of skirted jigs and even weightless, but it has been tough to beat on an traditional Texas rigâ€”it matches up beautifully with a 3/0 Gamakatsu Offset EWG hook and a smaller 1/4-ounce tungsten weight. I’ve been using this particular rig while skipping docks and pitching to isolated stumps and the results have been nothing short of excellent.

The bites I’ve had on the Paca Slim have been the type of bites that keep you awake at night. There hasn’t been any pecking or short-striking to speak ofâ€”you can actually hear the line slap against the rod blank they bite it. Just last night, I had about 45 minutes before dark to do a little fishing. After just 20 minutes, my best 5 bass weighed roughly 20 pounds and they all absolutely choked this bait. Even better, I used the same Paca Slim to catch all 5 bass.

This is an excellent all-around soft plastic that deserves careful consideration from anglers of all skill levels. It holds up well, it’s affordable and most importantly, it catches fish in a big way. I’ve already ordered several more bags and will continue to use the Paca Slim throughout the year.