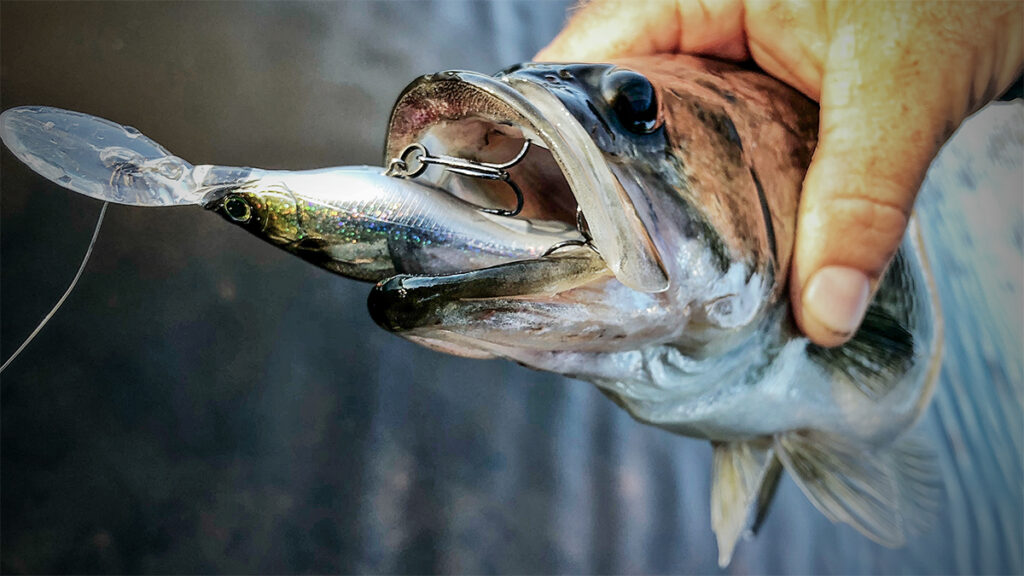 Cold-water cranking is a different animal compared to crankbait fishing any other time of the year. You can still catch fish on some of the same baits, only having to adjust the retrieve a bit to get a bite. But then some of the baits you’ll use in the winter months are a little different from other crankbaits you’ll use the rest of the year, with specific actions and profiles.

Today we’re going to be looking at one such wintertime bait, the Hardcore Shad SR 60. Not that you couldn’t catch fish on this bait during other seasons, but there are certain characteristics about it that indicate it was tailor-made for cold water. In addition, this lure was designed to overcome some of the hurdles you’d face with other cold-water crankbaits that have been around a while. So let’s take a look at what all I’ve learned during the testing of this lure so far. 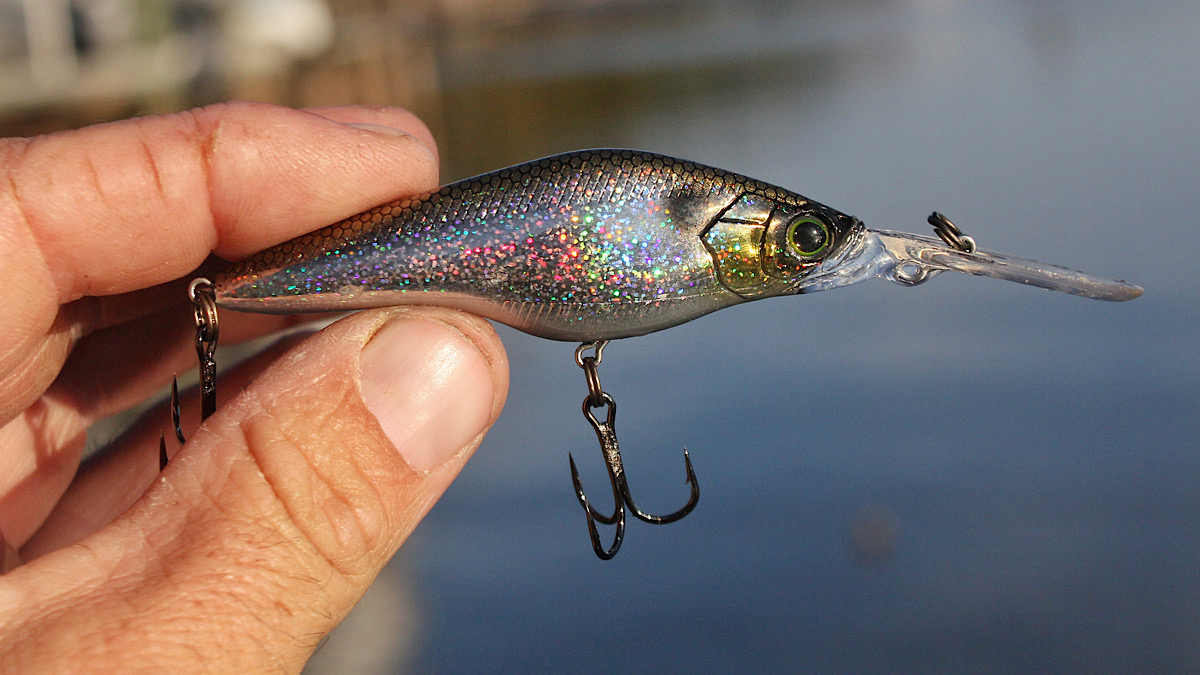 As previously stated, it’s obvious this bait was built for cold-water bassin’. The best indicator of that is its action. Crankbaits designed for cold water are often referred to as finesse crankbaits. The finesse is more focused on the action of a crankbait than the size of the lure like it is when talking about many other baits. A finesse crankbait has a tight action, meaning there’s not a really wide wobble or a big top-to-bottom rocking action. Instead, the bait simply shimmies through the water with a tighter wobble and rock than say a squarebill or deep-diving crankbait.

This is the action the Hardcore Shad SR 60 has. The SR stands for shallow running, the 60 for the bait’s length at 60 millimeters (2 3/8 inches). So the Shad SR 60 gives you a great finesse crankbait with a tight action that can be fished in the 4- to 5-foot range during the winter months when the fish in that strike zone are particularly lethargic. This tighter, subtle action is less intimidating to a fish and draws strikes when larger, more aggressive baits won’t get bit. But there are already a lot of finesse crankbaits out there for this type of fishing. So, what does the Shad SR 60 bring to the table? Well, I’m glad you asked. 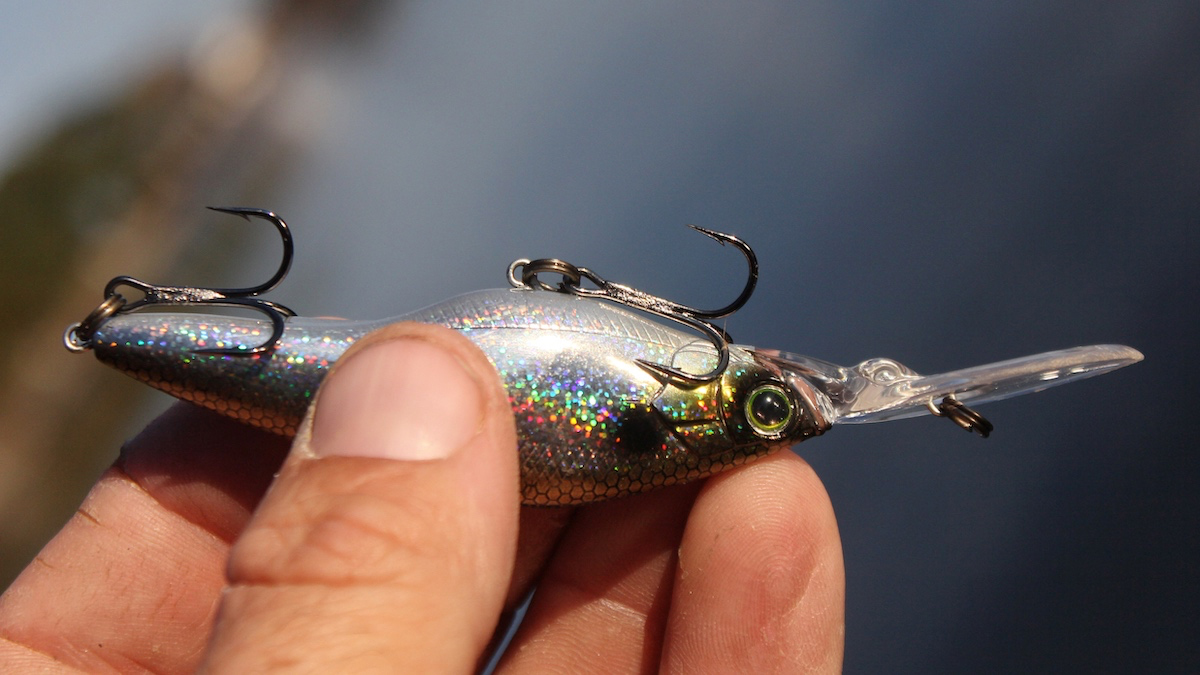 There are a few problems that arise when trying to fish a lot of the finesse crankbaits out there. The biggest drawback with baits in this category is their castability. Often, it feels like you’re trying to cast a potato chip, as we often describe it. This causes many anglers to have to resort to spinning gear for this kind of fishing, which has additional benefits in the eyes of some but is simply a nuisance for me personally, as I’d rather be able to fish anything I can on a baitcaster.

Hardcore granted that wish for me by incorporating a magnetic weight transfer system into the SR 60 that greatly increases its castability compared to other baits in this category. This system consists of a spherical tungsten weight that is able to roll up and down a chamber between the belly and the tail of the bait. The weight locks into a magnet in the belly when being fished and dislodges to load up in the tail when casting. Putting this weight in the tail makes the bait aerodynamic on the cast which helps the bait soar through the air like a dart, versus flailing around like a potato chip. 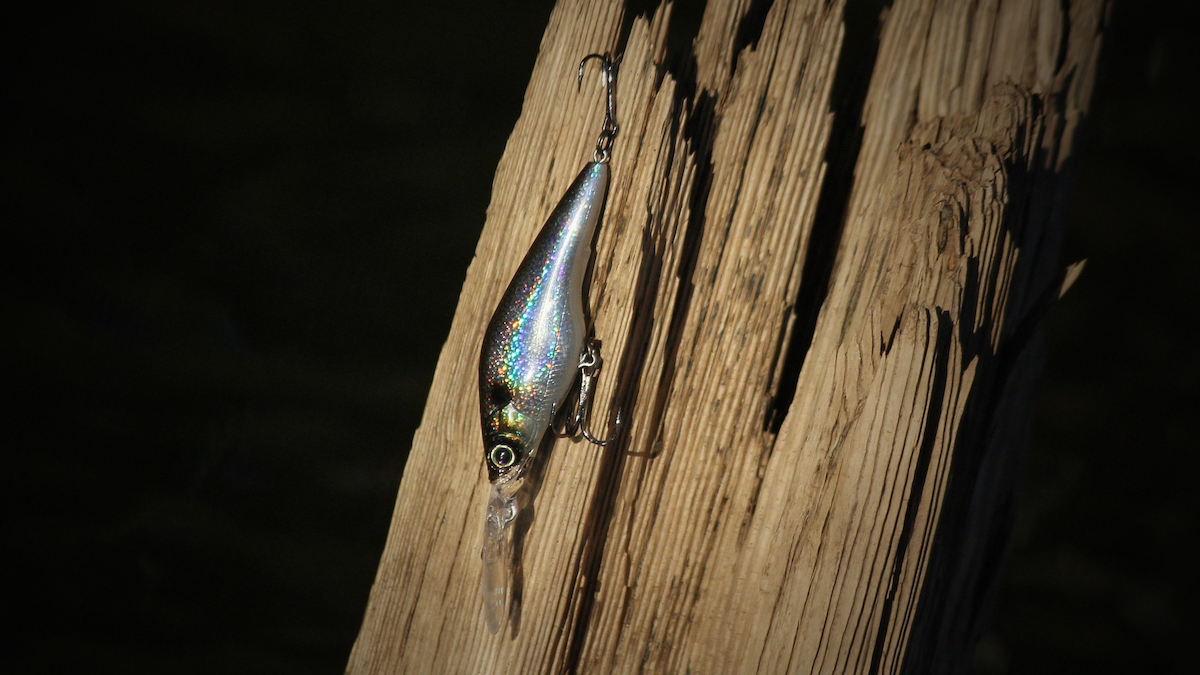 The second biggest issue I’ve run into with finesse crankbaits is their tendency to not run straight or to blow out throughout the retrieve. Though these baits are primarily intended to be fished slowly in cold water, you can catch fish on them other times of the year. And in those warmer seasons, you don’t have to fish them as slow. However, with many of these type baits, you’re unable to fish them faster because they won’t run straight and dig deep, but rather have a tendency to kick out to one side and come up towards the surface, or blow out.

The SR 60 doesn’t do that and is one of the truest-running crankbaits I’ve ever fished with, meaning it digs down and runs straight no matter how fast I reel it. In addition to the magnetic weight transfer system, Hardcore added a fixed weight. This combination is what they accredit the consistency of the SR 60’s retrieve to. And I’m sure this has a lot to do with it but I also believe it has something to do with something else that is particularly unique about the baits design, its bill. 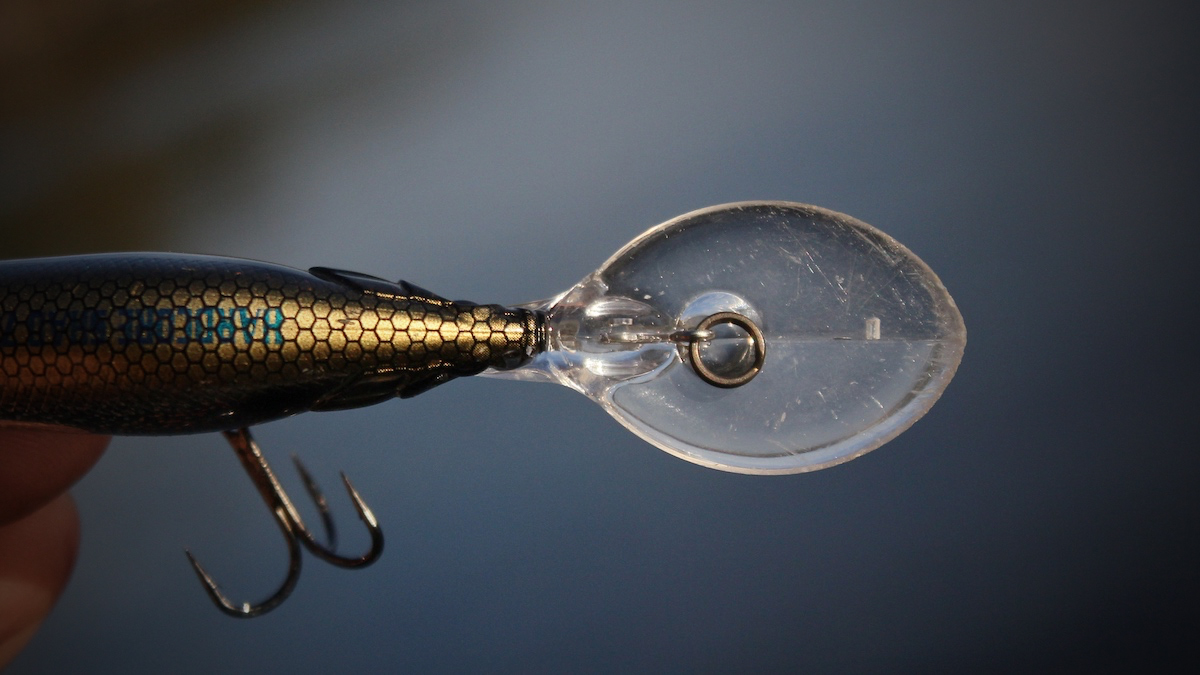 I try my best when writing these reviews to steer away from the term unique. It’s not lost on me that many internet product reviews all seem to say the same thing—that the product being reviewed is the best thing since sliced bread. So I typically try to stay away from terms like “game-changer”, “unique” and “best” knowing they’re exhausted terms that don’t hold a lot of weight anymore. All that being said, I don’t know any other way to describe this bill design for this type of bait except to say that it is… unique.

Shaped somewhat like an Indiana blade you might find on a spinnerbait, this bill looks very different from anything else I’ve seen on a finesse crankbait but it works extremely well and has to be a contributing factor to the bait’s overall consistent action. We talked about a lot of other finesse crankbaits blowing out on the a fast retrieve, but even some of those that don’t blow out on the retrieve still have a tendency to blow out when they collide with cover or the bottom. This bait not only digs and runs true when being reeled faster but also deflects and corrects way better than most finesse crankbaits.

Many of the other baits in this genre, even the ones that run fairly true in open water, lose all consistency after colliding with cover. You want a bait to deflect a little when you hit something, since that deviation from the norm is what often causes a trailing fish to eat it. But as soon as that bite doesn’t come, you want your crankbait to regain its composure and dig back down. Many baits like this simply don’t and instead they blowout and run off to the side and all the way up to the surface. The SR 60 does not do that and quickly digs back down to the bottom to continue searching out a bite. 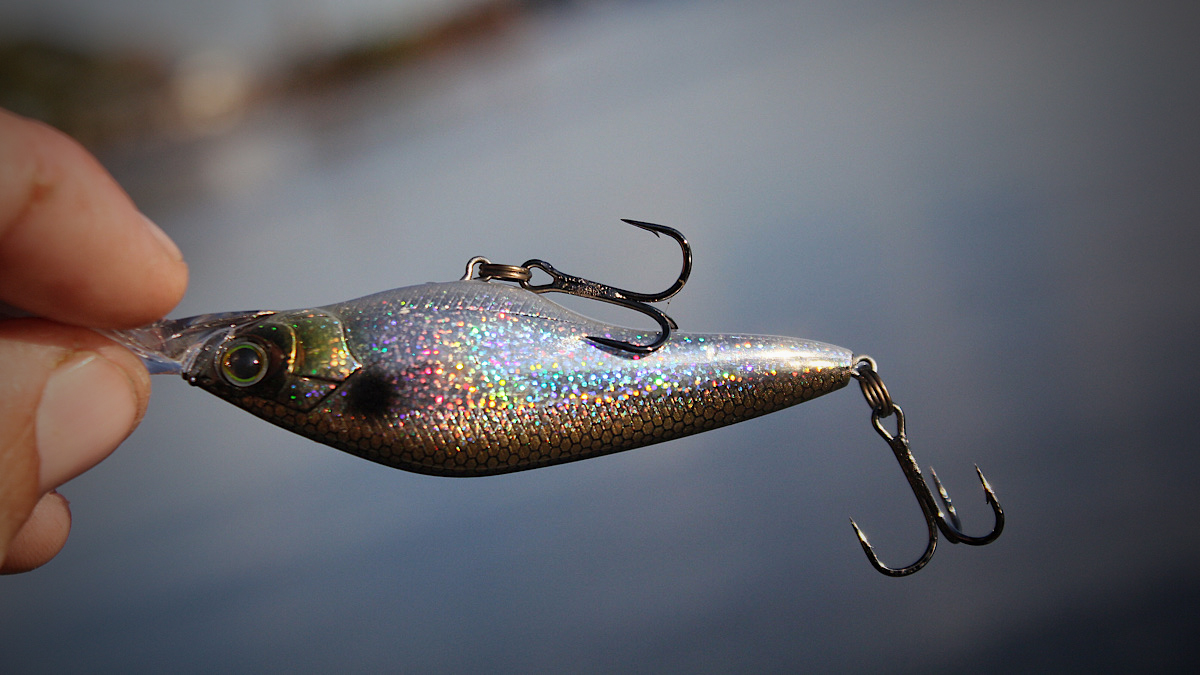 It’s obvious I’m a fan of this one, but with good reason. The addition of the Shad SR 60 to my arsenal gives me a bait to use for a style of fishing I simply refused to participate in much before. I didn’t like having to fight and fish a finesse crankbait because most were too hard to throw and too inconsistent on the retrieve. The Shad SR 60, through the magnetic weight system, fixed weight and bill design, solved a lot of the issues I had with finesse cranking.

But in addition to all of that, this bait has a fantastic set of thin-wire, sharp hooks perfect for penetrating a lethargic fish’s tough lips in cold water. There’s also a wide range of colors. Some, like the Pearl Holographic Shad I spent my time testing out, having a particularly attractive look to them with a combination of transparency, eye-catching chrome and dazzling glitter. All this for a price tag of $9.99, which doesn’t make it the most affordable bait in its genre. But I’d say bang for your buck-wise, the Hardcore Shad SR60 is pretty hard to beat.

The Hardcore Shad SR 60 is available at TackleWarehouse.com.