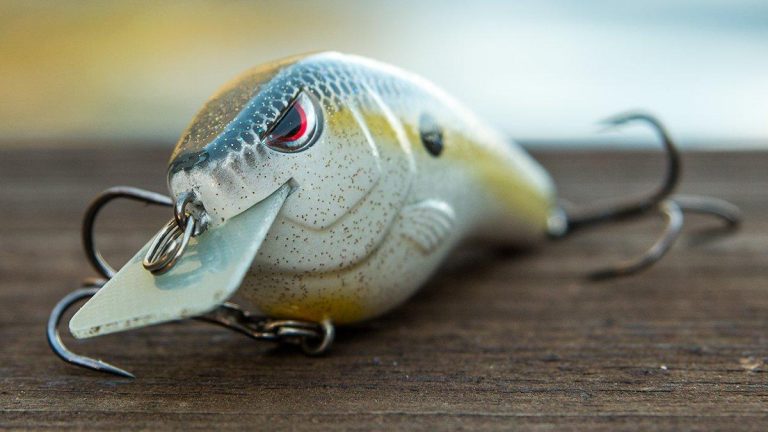 I’ve caught some of the biggest bass of my life on SPRO crankbaits, so you can probably imagine how excited I was to extensively test their newest crankbait. The news of a Fat Papa Squarebill got a lot of people talking, but I needed to know whether the hype was fact or fiction. So after many weeks of fishing this new plug in several different bodies of water, I’ve come to a definitive conclusion.

It’s bad to the bone; and that’s coming from one of the pickiest crankbait fishermen on Planet Earth.

So many crankbaits these days are advertised to have a “hunting action”. I test just about each one in hopes of these claims being true, but I’m often left disappointed. There are a lot of precise design elements that have to be just right in order to achieve this sought-after attribute.

Much to my delight, the SPRO Fat Papa Squarebill hunts incredibly well without any modifications whatsoever. I have not tinkered with or upgraded any part of this crankbait and it looks just like an old balsa plug in the water.

When you start cranking on this lure, even with a high-speed reel, you’ll notice that it really starts wandering from side to side. Equally as important, however, it always tracks back to its center line to avoid blow-outs or helicoptering. I’ve tested this lure for hours in ultra-clear water and on average, the Fat Papa Squarebill hunts roughly 6 to 8 inches to each side. 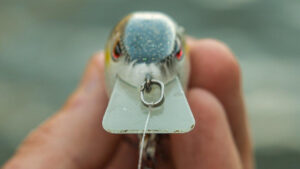 I harp on this for one simple fact: I’ve rarely seen a baitfish swim in a straight line. They’re always acting erratic and jumpy, for lack of a better word. I want to show a bass something natural, just like it would see from a real baitfish. The design of this crankbait does an excellent job at producing unpredictable, lifelike movements at all retrieve speeds.

That’s getting tougher to find in today’s hard bait market.

Buoyancy is a big deal

I like a fast-floating crankbait because I primarily fish a lot of thick cover. I’m often making pitches just 10 to 15 yards in front of my boat, so when I stop my reel handle, I need that crankbait to get up and away from any potential snags. I call it “worming” a crankbait and I talk about it at length in this video.

The added buoyancy of the Fat Papa Squarebill has allowed me to fish some surprisingly thick cover with very few hang-ups. As soon as I bump that piece of cover, I can pause my retrieve and it will quickly find its way over the impediment. Additionally, I’ve noticed that this plug will actually “back up” after a collision, which makes it even easier to get through the thick stuff.

Deflection-wise, this squarebill will hold its own with some of the most popular squarebills on the market. Just this past weekend, I had a great finish in a big tournament and caught several key fish by deflecting the Fat Papa Squarebill off of chunk rocks. Never once did I have to ruin my area and go retrieve my crankbait after a snag.

Durability has been impressive thus far 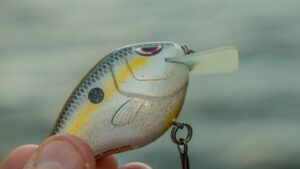 After several weeks of testing this lure, it has held up to the abuse quite well. The circuit-board lip has remained securely fastened to the body of the lure and the finish has almost zero hook rash. After all the junk I’ve fished, I’m genuinely impressed because I usually break a lot of crankbaits.

It’s important to note, however, that I do not slap this lure on the water between casts to clean it off. Circuit-board bills can break if you repeatedly do this, so I’m careful not to put any unnecessary stress on the bill connection. That’s just the nature of the beast with these designs.

The thump isn’t too strong

Truth be told, I was expecting the Fat Papa Squarebill to have a little more wobble to it. But I’m actually glad it doesn’t because it has proven effective in both clear and dirty water. It has a fairly tight wobble for its shape, which has made it a much more versatile crankbait than I originally thought.

As you can see in the fish photo in this piece, I’ve been cranking some really clear water. We’re in a drought and it’s the clearest I’ve seen these lakes in a long time. But because this crankbait doesn’t overpower the bass with an obnoxious thump, I’ve enjoyed a lot of good fish catches in water I’d normally never throw a crankbait.

Of course, I have found some dirtier water nearby and the bass haven’t had an issue finding and eating this crankbait. In my opinion, this is a really nice mix that should appeal to anglers throughout the entire country.

Components are good to go 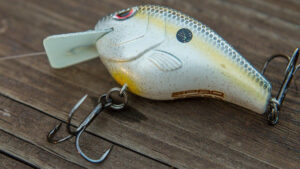 I don’t really like tinkering with tackle—I like fishing more. So I always try to find lures that are ready to fish right out of the package. If it has wussy split rings or dull hooks, I generally won’t use it. Quality components are a big deal to me.

I can comfortably recommend taking the Fat Papa Squarebill out of the package, tying it on and going fishing. Period. 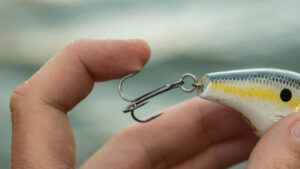 The Gamakatsu hooks aren’t cheap tinfoil hooks. They hook bass and keep ‘em pinned with no problem at all. The split rings are solid and do not bend or warp, even when I’ve hooked some big hybrid bass. And to put the proverbial icing on the cake, this plug is topped off with a oval-shaped line tie that ensures your knot doesn’t get stuck in and abrazed by the gap. 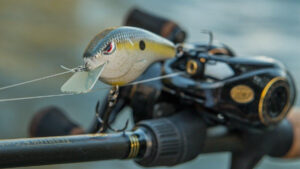 This is a very well-built crankbait that is going to catch a lot of fish all over the country. The color selection isn’t crazy, but it has all the staples you’ll likely need: Baitfish, bluegill, craws and bright colors for dirty water. It’s certainly worth a try—I think you’ll really enjoy fishing with it.

The SPRO Fat Papa Squarebill is available at TackleWarehouse.com.