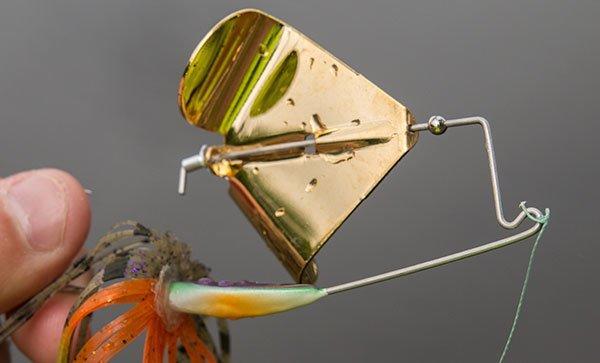 There’s nothing more exciting in bass fishing than giant topwater blowups. Throughout the early spring months, the effectiveness of buzzbaits is undeniable. Whether you’re fishing them over potential bedding areas or capitalizing on a major shad spawn, it’s a great technique that will generate a lot of great action.

It’s buzzbait time in my part of the country and I’ve been testing the new Eco Pro Tungsten War Cry Buzzbait for the last several weeks. After catching several nice bass on it and speaking with its designer, Elite Series pro Jared Lintner, I’m extremely impressed for several reasons.

Runs true without tuning
How frustrating is it to spend a bunch of money on a great-looking buzzbait, only to have it swim every direction but straight? It happens to me quite often and it’s a pretty disappointing feeling. Tuning a buzzbait is no easy task, so finding one that runs true is imperative.

The War Cry Buzzbait runs straight as an arrow without any tuning whatsoever. I’ve tested several of them in various colors and each one runs true regardless of the knot, line type or conditions. This characteristic has allowed me to put the War Cry into some ridiculously tight spaces without any hang-ups or snags. You can sling it underneath docks without worry of catching the posts, flip it into thick laydowns without tracking into limbs and precisely dissect grass lines while keeping it in the most high-percentage areas. 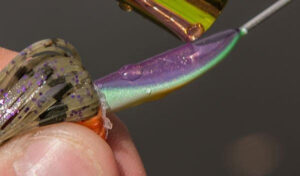 Buzzbaits are a big part of my arsenal every spring and I’m very familiar with their sounds. With that being said, I challenge you to find a buzzbait that sounds like the War Cry. Through all of my experience with buzzbaits, this one has the most unique sound I’ve ever heard. Elite Series pro and War Cry designer Jared Lintner agrees.

“The morning of the St. John’s  Elite Series event, I was casting the War Cry around at launch to make sure everything was up to par,” Lintner said. “Within three cranks of my handle, I had several fellow competitors immediately approach me and ask what it was. They had never heard anything like it and were totally intrigued by its unique sound. The amount of attention this buzzbait draws from both bass and other anglers is astounding.”

I’ve said it 100 times and I’ll say it again””big bass don’t get big by being dumb. They’ve been around for a while and have probably seen and heard every lure in existence. This time of year, they’re constantly air raided by buzzbaits every weekend and they become conditioned to hearing the same pitch and cadence. This results in fewer bites and many more half-hearted short strikes.

The War Cry has two very different sounds depending upon your retrieve. When reeled quickly, it has a very high pitch “clicking” sound. The blade actually knocks against the 97% tungsten head with every revolution, producing a ridiculous amount of surface commotion. It doesn’t sound like the regular “clack” you hear from buzzbaits because the tungsten is much denser and harder than traditional lead heads.

My favorite and most productive retrieve with the War Cry is a very slow, deliberate retrieve. I’m able to reel this buzzbait much, much slower than many others due to its banana-shaped head. The shape of the head acts as a keel would on a boat, allowing this buzzbait to ride high in the water column without digging or diving when slow-rolled. This accomplishes three very important things””it keeps it in the most productive strike zones longer, it caters to big, lethargic bass and it produces the most unique sound I’ve ever heard from a buzzbait. When retrieved slowly, you can distinctly hear every single revolution of the blade as it makes a very low-pitch “clucking” sound. No, it doesn’t sound like a chicken, but that’s the best way I know to describe it. As it trudges across the surface, you’ll notice a very different “cluck, cluck, cluck” sound that, in my experience thus far, drives the bass absolutely nuts. 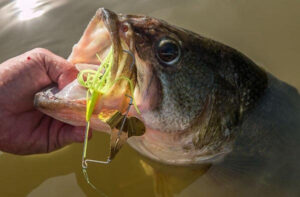 It’s always been difficult for me to find a buzzbait that lasts over the course of a year. After a few dozen big blowups, the skirts start unraveling, the collar dry rots and the wire becomes warped, compromising the action of the buzzbait. 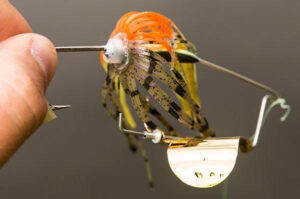 I’ve had a bunch of blowups and fish catches with this buzzbait and have been very impressed by its durability and resilience. The skirt stays put regardless of what you put it through””whether you accidentally slam it into a dock or you’re getting bit every few minutes, the skirt stays in place without sliding down onto the hook shank. I was also happy to see the durability of the tungsten head. Unlike many lead heads, the War Cry’s head will not be harmed as it’s continually hit by the prop. It resists scratches and cuts very well and seems to last for a very long time.

The War Cry is also made with a lighter wire than most buzzbaits, which initially worried me about its durability. However, it hasn’t been an issue whatsoever. The lighter wire actually helps collapse the buzzbait when a fish eats it which has been a tremendous help in terms of my hookup ratio.

If you like topwater fishing and are interested in trying a new buzzbait with a completely different sound, I suggest checking out the Eco Pro Tungsten War Cry Buzzbait. The MSRP is $7.99 and it will catch a lot of fish for you. 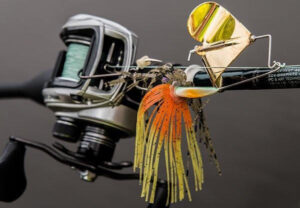