I’ll preface a review on the new BOSS Brent Ehrler Signature Series Shakey Head with the fact I don’t fish shaky heads as much as I used to. I did, however, spend a decade fishing one pretty regularly on clear, Ozark highland reservoirs like Table Rock and Beaver Lakes. So I know what makes for a good shaky head. And I’ve modified how I fish a shaky head to fit the types of plastics I choose and where I think the bass are in relation to the cover.

I reviewed the Brent Ehrler Shakey Head in a way that I fish shaky heads now but also how I had previously fished them on clear water impoundments and I think the majority of the anglers I talk with fish them. There are several standout features about this shaky head that I think other anglers will appreciate as well including the following:

It used to really hack me off when I got a bite on a shaky head, could see my line swimming off, only to set the hook and completely whiff on the fish. Sure sometimes they get it by the tail. But I think sometimes the hook just didn’t have good separation from the plastic and you just didn’t hook the fish that bit.

The Brent Ehrler has almost 1 1/4 inches of separation between hook point and collar. What that means is when a fish bites down there is going to be more space for the plastic to collapse and get out of the way of the hook poking out. This is pivotal to a good shaky head. If you can’t get separation from the plastic, you can’t hook fish. At least not efficiently.

Anglers want a light wire on a shaky head. The reason you want that is because a lot of the times a bite and hookset is nothing more than constant pressure. You reel into the fish and the hook starts penetrating before you even rear back on the rod. The larger the diameter of the wire used in the hook. The harder it is to start that penetration. So a light wire hook gives you a greater advantage.

The disadvantage comes when you use too light a wire and the hook flexes during the fight with the bass and they get off.

The Brent Ehrler Shaky Head has a good light wire. Yes it will flex under extreme load. But I found a lot of the bass I caught were hooked to the bend. Sometimes the hook came all the way out the others side. But it didn’t make a big hole in the mouth. Which is an advantage because a small hole means the barb will hold better and the fish has a harder time throwing it.

The next most important thing after getting a good hooking percentage with a shaky head is a great keeper that keeps your plastics in place without tearing the ends of the plastic up when getting it rigged or when a fish does bite.

The unique keeper on the Brent Ehrler Shakey Head has an angled barb. The angle of the barb is so that you can thread the plastic on easily, without it tearing the bait up in the rigging process. The keeper holds the bait really well. To test this I did two things. One was I skipped some plastics around docks on this head. The other was I pulled it through some gnarly cover and also caught several fish on them to see how the plastic was after a few fish.

The results were pretty good. I was actually a little surprised that it held up so well with that flat head skipping the bait under docks. It would slide under there easily with a straight tail worm or small compact craw bait. And it came through cover surprising well, with the plastic still in place.

A few fish pulled on the worm, even pulled the tails off but the plastic stayed on the keeper all through my tests. 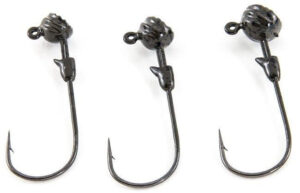 The nuts and bolts of it

The Brent Ehrler Shakey Head comes in 4 sizes in 1/16-ounce increments from 1/16 to 1/4. I primarily fished the 3/16 and 1/4 ounce sizes. But it’s nice to have lighter options for shallower water and when you think a really slow fall might get more bites. I would like to see a 3/8-ounce size for fishing a bit bigger plastics on deep humps, points and ledges or in really windy conditions.

They are made with a stand up head. I’m not really a believer in a shaky head having to stand up but I suppose it’s nice to have that option. Most shaky heads land head down and tail up when they hit bottom. But then settle to more of a flat position. But I Think those flat heads can actually come over rock a little better without getting snagged as easily as say a ballhead.

They come in black, brown and dark green pumpkin and come 4 to a pack for $5. You can find them on tacklewarehouse.com and also on fishingskirts.com for the 1/16 ounce size.

But if you’re looking at changing your shaky heads this season or trying some other heads, you might want to check the Brent Ehrler Signature Series Shakey Head out from BOSS. 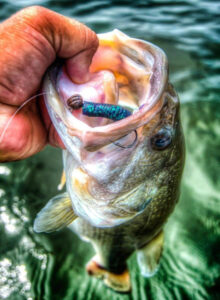