Contrary to popular belief, not all big worms are the same. Take a little stroll through your local sporting goods store or spend a few minutes clicking around on Tackle Warehouse and you’ll see what I’m talking about. You’ll find ‘em with thin bodies, thick bodies, ribbon tails, curly tails and pretty much everything in-between. While it’s nice to have such a wide variety from which to choose, it can also make it difficult to make a confident purchase.

The Big Bite Baits Kriet Tail Worm, however, blends all of my favorite soft plastic characteristics into one incredible worm that catches the fool out of bass. Really and truly, I struggled over writing this review because this worm is solely responsible for some of the best fishing days I’ve ever had. But I love helping folks catch more fish, so here it is. The proverbial cat is, in fact, out of the bag.

There are four things that allow me to rely on this worm throughout the entire year.

It’s a stick worm on steroids

Stick worms don’t look like much, but they have an undulating, parabolic action that drives bass absolutely insane—that’s why so many anglers use them when the bite gets super tough. Now combine this simple profile with a ridiculously beefy ribbon tail and you’ll have an accurate mental image of the Big Bite Baits Kriet Tail Worm. Sure, it’s different than what you’re probably used to, but it works wonders.

Whether you’re using the 6-inch or 10-inch model, the action of this worm is outstanding. I actually like to use a fairly light weight when casting it on a Texas rig because as it falls, Kriet Tail worm constantly pulses and glides just like a stick worm. When I first started fishing deep brush with this worm, at least half of my bites actually happened on the fall before it ever reached the brush. This wasn’t happening with my other worms, so I spent some time playing around with it in shallow, clear water. What I discovered was impressive.

As this worm falls, the huge ribbon tail almost acts like a parachute—it significantly slows its fall rate. So as it lazily falls to the bottom, the round body section of the worm constantly pulses without any added action from your rod tip.  As the body pulses, the ribbon tail “follows its lead” and slowly trails behind while creating an insane amount of water displacement.

Now don’t get me wrong—the Kriet Tail is excellent on a heavier Texas rig, but I suggest using the lightest weight you can get away with while maintaining constant bottom contact. You’ll be surprised by how often you’ll engage your reel and see your line already swimming to the side. 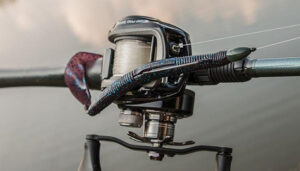 When many anglers see these big ol’ beefy worms, their immediate reaction is to Texas rig it and cast it to deep cover and structure. Yes, that definitely works, but this worm has several different applications that can really save you when the fishing is tough.

Weightless Texas rig—Whether I’m swimming it through vegetation or dead-sticking it around vertical cover such as dock posts, I’ve had a lot of success rigging the Kriet Tail just as I would rig a floating worm. I’ve actually seen big bass eat small snakes throughout the summer, so I love swimming this worm around grass lines and even on top of matted vegetation. Its tail emits a constant “thump” on the surface, allowing me to use it just as I would use a soft plastic toad. When the bass aren’t very aggressive, I’ll also pitch a weightless Kriet Tail around dock posts and let it fall slowly on a slack line. Because the bass don’t see this type of profile very often, it can be super effective.

Carolina rig—For such a dense worm, the Kriet Tail falls slowly which makes it an excellent choice when you’re Carolina rigging deep structure. While some big worms sink like a rock and look like a twig behind a Carolina rig, this worm moves a lot of water while staying a few inches off the bottom.

Bite it—This is something I’ve picked up on over the years that has really saved my hind end on post-frontal days. You can actually bite the ribbon tail off of the Kriet Tail Worm, creating a perfect stick worm. When the barometric pressure rises, bass don’t always want a big, overpowering presentation and this worm allows me to adjust quickly in time-sensitive situations.

While some stick worm-type bodies can rip easily after a few fish catches of excessive skipping, the Kriet Tail worm is extremely durable. Over the years, this characteristic has saved me a lot of money and aggravation. They’re very resistant to tearing and they stay on the hook extremely well.

My college fishing partner and I finished in eighth place in the 2010 BoatUS Collegiate Bass Fishing Championship using the Big Bite Baits Kriet Tail Worm—every single fish came on the 10-inch model. Throughout the entire tournament, we had two bags of ‘em and still had several worms left by tournament’s end. That’s very impressive in my opinion.

If you’re not careful, this sport can empty your wallet in a hurry. But get this—these worms are priced starting at $2.69 per 10-pack. When you do the math, each worm costs you a little over a quarter. I don’t know how they maintain such an aggressive price point, but I’m not complaining.

If you like fishing soft plastics, I recommend checking out the Big Bite Baits Kriet Tail Worm. They have awesome action, you can use them all year and they offer outstanding value to anglers of all income levels. 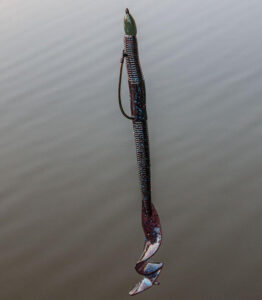