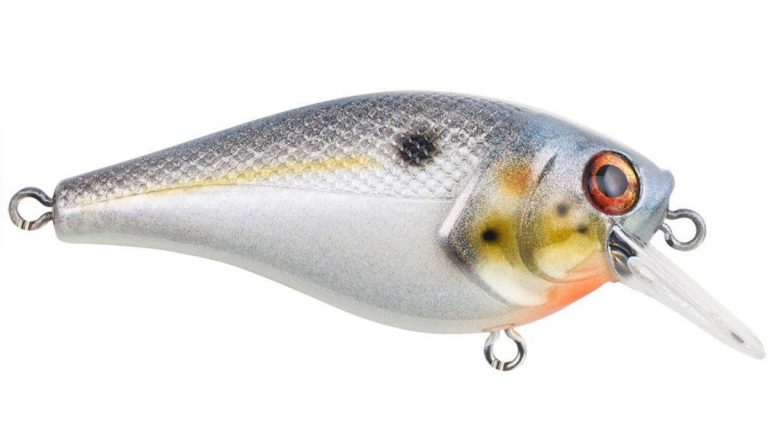 I have a big-time addiction to crankbaitsâ€”thereâ€™s simply nothing better to me than feeling several giant head shakes on the other end of my cranking rod. So when I learned about the new Berkley hard baits at ICAST this past summer, I was excited to test them on my home waters.

Iâ€™ve been fishing with the Berkleyâ€™s new squarebill crankbait, the Pitbull 5.5, for several weeks and after putting it through just about every shallow-water situation imaginable, it has certainly earned a spot in my cranking arsenal.

Measuring 2 3/5 inches and weighing 3/8-ounce, the Berkley Pitbull 5.5 loads your cranking rod excellently on the back cast, allowing for long and accurate casts for anglers of all skill levels. Because so much of shallow cranking depends on precise angles, I made it a point to scrutinize the Pitbullâ€™s castability.

It doesnâ€™t helicopter in mid-flight, which makes it easy to dissect windblown pieces of cover when the cranking bite is often at its best. Whether youâ€™re using a spinning rod or a 7-foot, medium-action casting rodâ€”thatâ€™s what Iâ€™ve been testing it onâ€”you wonâ€™t have any problems putting this crankbait into tight places.

Youâ€™ll also appreciate the deflective properties of the Pitbull 5.5. Even in the gnarliest of laydowns, youâ€™re able to â€œwormâ€ it through the cover with very few hang-ups. When it collides with a piece of cover, it doesnâ€™t lose its track like many squarebills Iâ€™ve tested. It kicks to the side just enough to protect the hooks from snags, but within a few handle turns it returns to its normal path. This keeps it in the optimal strike zone longer, which has been a major key to many of my recent fish catches.

Itâ€™s also quite durable and if you abuse squarebills like I do, durability absolutely matters. Iâ€™ve slammed it against dock posts, concrete seawalls and plenty of riprap without any loss of structural integrity. The bill remains intact with the body and there are no splits, cracks or chips to speak of. Iâ€™ve also been impressed by how well the paint job resists hook rash. Berkley put a lot of time into the color schemes of these lures and thankfully, they maintain their beautiful finish after heavy use.

The shallow cranking bite has been excellent lately on my home waters, so it was a perfect time to test the Pitbull 5.5. Iâ€™ve fished it in both heavy cover and open-water situations with outstanding success.

Our local lake is experiencing a drawdown this fall and winter, which means there is a bunchâ€”a whole bunchâ€”of shallow cover to get snagged on. Brush piles and stumps that were once in 6 feet of water are now in 2 feet of water, which has been driving some of the local anglers crazy. If youâ€™re not using a squarebill that deflects well, youâ€™ll spend more time freeing your plugs than fishing.

With that being said, this crankbait has held its own in these challenging conditions. Iâ€™ve caught a lot of fish by ticking it off the top of shallow brush piles and I can count on one hand the number of times Iâ€™ve been snagged. The Pitbull 5.5 dives roughly 5 1/2 feet on a long cast with 12-pound fluorocarbon line, which has also allowed me to target shallow points throughout my testing. The open-water scenarios allowed me to discover its unique hunting action. It wanders a few inches to each side throughout the retrieve, but it doesnâ€™t â€œspin outâ€ and lose its depth or original trajectory which makes it an excellent choice for faster retrieves as well.

This crankbait also comes with Berkleyâ€™s new Fusion19 treble hooks and this has been my first experience with them. Iâ€™ll be honestâ€”I really like â€˜em so far. They maintain their sharpness very well, even when fishing around chunk rock, and I havenâ€™t had any issues with bending or the tips rolling over. Theyâ€™re super sharp and itâ€™s awesome to be able to use the stock hooks on a crankbait without any worries.

Iâ€™ve become a quick fan of the Berkley Pitbull 5.5. Itâ€™s definitely one of those â€œworkhorseâ€ crankbaits that doesnâ€™t require constant babysitting. Feel free to beat the heck out of it and put it into precarious situationsâ€”I think youâ€™ll be pleasantly surprised. The only thing Iâ€™d like to see is a firetiger and chartreuse/black back colors for dirtier water. For $6.99, this crankbait offers great value to serious anglers.

The Berkley Pitbull 5.5 is available at TackleWarehouse.com.