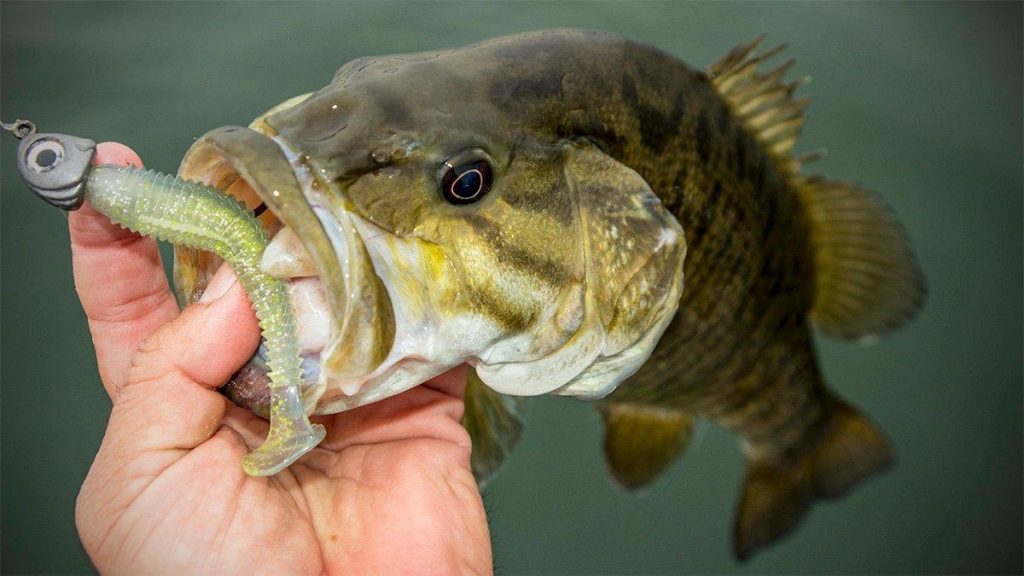 Distance and depth can lead to more bass fishing success when fishing clear cold water in the winter and early prespawn.

During an early winter trip to Alabama’s Lewis Smith Lake, I watched Aaron Martens grow increasingly frustrated with pods of spotted bass that were blowing up on shad in the mouths of deep creeks. The frequent boils seemed to imply an easy feeding deal, but the fish remained out of reach for even a heaving cast.

Sneaking into range can be easier said than often done in deep, clear, highland reservoirs.

“They’ll hear you coming and move,” Martens lamented. “That’s why it can be so hard when the fish are actively feeding; they won’t stay in one place long enough.”

The solution: A swimbait.

Okay, good call for bait-oriented fish, but wouldn’t matching the small forage with a 2- to 3-inch swimmer bring us back to the same casting distance dilemma? Initially, yes; but Martens’ innovative mind rarely embraces the traditional; he rigs his small swimbait on a 1/2-ounce jighead and successfully engaged fish he could not otherwise reach. 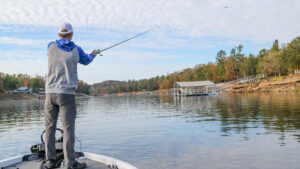 Any jighead can fit this blue collar plan, but Martens has taken a liking to Picasso’s tungsten ball head jig, as its smaller size-to-weight yields a smaller more natural profile than similarly weighted lead heads. He also favors the ball head’s balance and smooth descent, while tungsten’s sensitivity quickly transmits any bottom bumps.

“If you’re fishing shallow, maybe you’d want to use a darter head, but for fishing deeper, that compact ball head seems to work best,” he said. 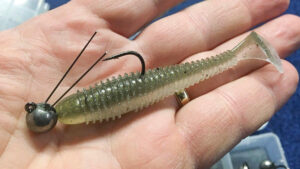 Martens likes this technique starting in the fall when bass are piling into the creeks to chase shad, but it starts to shine when winter finds fish in a funky mood. Maybe anglers have been catching them on reaction baits, but that action wanes. Also, when the fish have seen too many drop shots and split shot rigs for the day, the oversized swimbait head often trips a bass’s trigger.

“When the fish get active and they’re eating shad, they like the swimbait’s tail action and that fast fall,” Martens said. “It’s sort of like when they’re eating a spoon; but when you’re throwing a spoon, it helps to have some windy or stormy conditions. But when it’s flat and it gets tough, or when there’s a ton of bait around, that (oversized) ball-head swimbait works really well.”

Largely, Martens considers this his go-to winter bait when he need to cover water; often to reach distant fish. He points to spotted bass roaming over deep timber as a prime example. 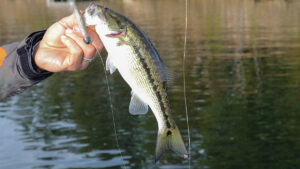 Fishing his bait on 7-pound Sunline braid topped with 6 to 8 feet of 5- to 7-pound Sunline Sniper Fluorocarbon, Martens lets his bait fall on a tight line with the reel engaged so it will fall on a pendulum, rather than a straight drop that drags down a bunch of loose line.

“It’s usually a really slow wind to find the depth the fish are at; or you can drag it across the bottom like a jig or a shaky head,” Martens said. “It works just as well as a jig or a shaky head, but sometimes it gets more bites because you can move it a little faster and cover more water.

“That ball head works really well when you fish it on the bottom; you can hit stuff with it and the bait rolls over stuff well.”

Bites often come on the fall, so pay attention to your line on that semi-tight pendulum. And have some fun with this versatile bait; yo-yo it, flutter and twitch it, maybe even a stop-and-go letting it reconnect with bottom periodically. Just always be ready to reel tight into a fish before setting the hook as they can knock slack in the line even in the coldest winter conditions. 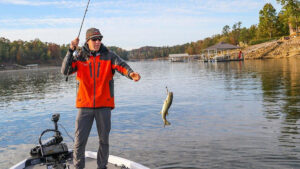