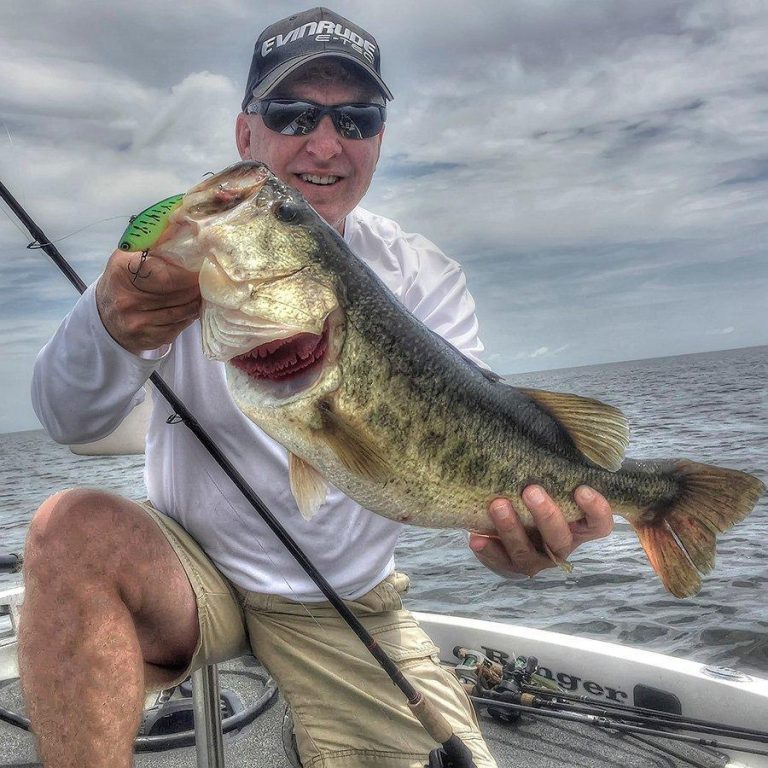 In Florida and anywhere anglers fish shallow, bowl type lakes, the notion of â€œdeep water fishingâ€ is all relative. Nevertheless, a lot of the local bass actually do make an offshore move upon which anglers can capitalize.

Having sampled most of the nationâ€™s top fisheries, FLW Tour pro Mike Surman is well-acquainted with what most envision when they hear the phrase â€œoffshore fishing.â€ However, calling Lake Okeechobee his home waters, Surman also knows the opposite end of the spectrum holds its own challenges and opportunities.

â€œA lot of what you find offshore in these lakes is manmade â€” like rocks from where a channel was dug.â€

Now a bass is a bass and, at the end of the day, they all want to eat. So, lacking the definable structure of say a TVA lakeâ€”those turns, high spots and drain points where schools of bass gatherâ€”fish in shallow southern fisheries live more of a nomadic summer existence.

How far will the fish move? Well, tagging studies can define specifics, but Surman offered some practical perspective.

â€œThey roam miles and miles,â€ he said. â€œYou can find a school of bass in an area and as long as the bait stays, theyâ€™ll stay. You may go out a week later, however, to a place where you were catching the heck out of fish, and there will be nothing.

â€œBut if you keep hunting, you can find them again. They might be 3 or 4 miles away, and it will be fish after fish. Because thereâ€™s not much structure out there, they follow bait. If the bait stays, they stay. If the bait leaves, they leave.â€

Unlike bank fishing, where logs, laydowns, docks and weed mats offer definable starting points, the summer offshore game can seem like a whole lottaâ€™ lookinâ€™. To minimize the hunt, Surman looks for a couple of clear fish indicators.

Feathered Friends: Bass arenâ€™t the only ones looking for bait schools and savvy anglers will do well to take note of low-flying gulls or terns.

â€œA lot of times, the birds will find them for you,â€ Surman said. â€œThe shad are up high first thing in the morning because the bass have driven them up.

â€œYouâ€™ll see birds milling around or youâ€™ll see one dive here and one dive there. You have to use any key that you can to hone in on where the fish are because they do roam so much.â€

Find the Feasts: Referencing the Texas saltwater experience of his youth, in which finding speckled trout and redfish often meant looking for bait slicks, the oils released by devoured baitfish form a clearly visible sheen on the water.

â€œThe shad have so much oil in their body, when the bass are eating them, the oil rises to the surface,â€ he said. â€œWhen you find those slicks, it can be incredible because the bass are feeding.â€ 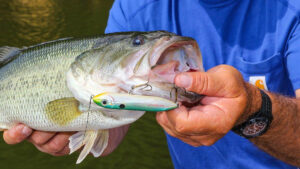 Surman names the YO-ZURI Rattling Vibe the all-time favorite Florida search bait. This regionally hot ticket lipless crankbait once delivered one of his best offshore days. After locating a slick, he and fellow FLW pro Clark Wendlant caught more than 100 fish in 2 hours, including a trio on one lure on one cast.

When he finds a bait school, Surman targets active fish in the upper water column with the Duel Hardcore Jerkbait. When the fish stop, heâ€™ll switch to a 10-inch Gambler worm and tempting the big bottom huggers.

Fellow Floridian and Bassmaster Elite Series pro Terry Scroggins keeps a topwater handy for those moments when the offshore fish feel feisty enough to crack a surface bait. During early mornings, late afternoons and cloudy skies, Scroggins knows his One Knocker Spook can call up a crushing bite.

Remember, even when fish in shallow lakes hold lower in the water column, itâ€™s a short stroll to the surface. But on the flip side, when high sun pins the fish deep, Scroggins relies on his Bomber BD6 deep-diving crankbait or a Carolina rigged 5-inch YUM Dinger.

Although electronics play a less critical role in shallow Florida lakes than in deeper fisheries, Surman still keeps the graph running. Heâ€™s not expecting to see much, but if he does, he treats it like gold.

â€œBecause there is very little structure, when you do find a little something different, it can be consistently productive. I have some rocks in the middle of Lake Okeechobee and when the temperature is right, itâ€™s a guarantee. 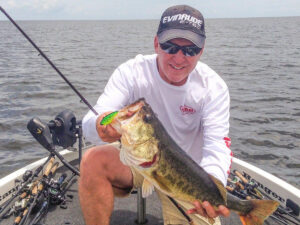