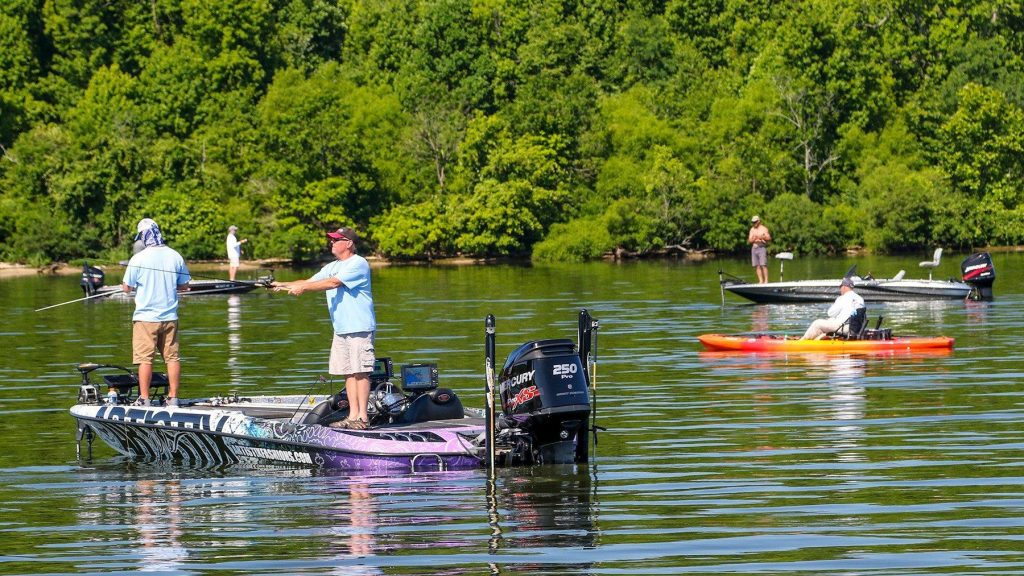 We all want the water to ourselves and we want to be the first ones to fish an area, but we don’t have any control over other anglers. So, at some point in the day, someone may have fished, or may be currently fishing where you want to fish. Don’t fret, though. Fishing behind other anglers may not be ideal, but it’s far from hopeless.

For starters, Smith expects high demand for key spots when fish are shallow or when fish are grouped up in small areas. Whether it’s the spring spawn or hot summer oxygen depletion that moves fish back shallow, the shoreline offers limited options and that proximity often leads to anglers fishing on top of one another.

But the issue extends further.

Observing boats on your spots is pretty straightforward, but various clues will cue you in to recent angling effort. Frog tracks, blow-up holes, waters muddied by trolling motor — take these signs accordingly, but also pay attention to fish response.

“A good example is dropshotting for deep smallmouth in the Great Lakes,” Smith said. “If you can see them on your graph within a few feet of the bottom yet they don’t react to your bait as you drop it down — meaning move down towards your bait — then it’s a very good sign they have been messed with recently.” 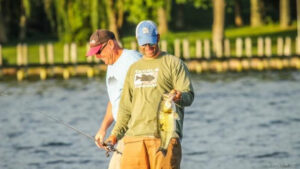 CHANGE UP YOUR APPROACH

When you’re certain the fish have recently seen baits, you might consider a few stand-out moves: 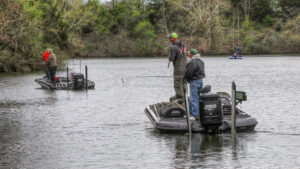 BELIEVE IN YOUR PRESENTATION

On the flipside, you don’t necessarily have to do anything different — just do it better than anyone else.

“I will always stick to what I have confidence in and have the best shot at getting bit on, even if the other guy is throwing it also,” Smith said. “In my opinion, it doesn’t do any good to pick up a bait you don’t have confidence in just to throw something different.

“If you know it’s what the fish want, throw it. Chances are you and the other person are both fishing at different angles and speeds anyway.”

Knowledge of the area buttresses that thought. As Smith notes, confidence comes from understanding the fine details like why the fish like a certain area (particular feeding opportunities) and how they access the area.

In tidal fisheries, learning which cycle ignites a given spot is essential.

“Tidal movement will cause fish to move in and out of areas making fishing behind someone less of an issue,” Smith said. “Someone can be sitting in an area all day and if you pull in and fish behind him on the right tide cycle as the fish move in or turn on, you are going to catch fish.” 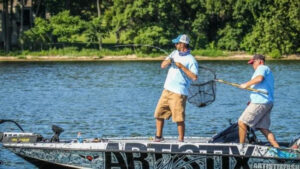 You probably don’t want to slide up next to another angler and inquire: “Are you about done here?” However, once they leave, the spot’s fair game.

A bed fish that’s endured an hour of pestering might need some time to regain her composure, while a dock that gives up a handful of quality fish might be done for a while, as well. Anywhere else, it’s all in how you feel about the situation.

“If I am knowledgable about the area, I have no problem going immediately behind someone or fishing side by side with them,” Smith said.

That being said, pacing and persistence are essential success elements.

“Keep yourself slowed down and don’t focus on what the other angler is doing,” Smith said. “I put my head down and stare at my electronics or stare at my line and watch for movement. You have to have focus and have confidence that you are going to catch one.

“I watched Randall Tharp fish on Cayuga Lake a few years ago during an Elite Series event and learned from watching him how focused you need to be. Every flip he made into the grass he never picked his head up from watching his line and waiting for it to move or jump.”

Lastly, when sharing a flat with other boats, criss crossing one another’s intended course remains a constant consideration. Here, a generous dose of diplomacy can set a cooperative tone that minimizes the headache of watching someone fish over the are you wanted to fish.

“You have to communicate so you know where you each want to fish and how you want to move around the area to prevent possibly disrupting the school of fish,” Smith said. “I’ve been in situations where I didn’t communicate with another angler while sharing an area and we were both wrong about what we assumed the other person was doing. We both got frustrated with each other, and ended up arguing when it could have easily been prevented.

“Saying something like, ‘Which direction are you working?’ or ‘Which way do you want me to go around you?’ is all it takes. I try to avoid confrontation and generally allow the other angler to dictate where he wants to go. It seems like the more defensive you get of an area, the more someone wants to move in on you.”

With more and more people going fishing, you’re inevitably going to run into areas other anglers have just fished, oftentimes you won’t even see another boat there but by being observant you can tell when an area has been fished and when you should adjust your plan accordingly. Use confidence baits, really exploit obvious targets as a gauge to the fish mood and pressure and then focus on every cast and presentation to avoid wasted efforts. 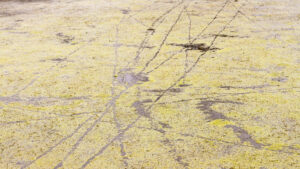