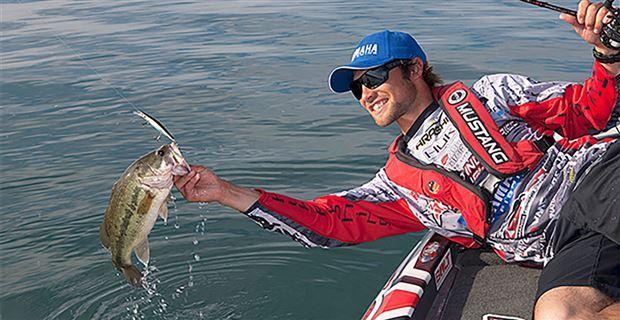 Bass tournament fishermen are famous for having “secret” lures they don’t tell anyone about, but Brandon Palaniuk’s secret lure is one that’s in virtually every angler’s tacklebox. The Yamaha pro’s lure is a jerkbait, but his secret is that he fishes it all year, and he especially likes to use it during the hot summer months.

“Most fishermen think a jerkbait is only effective during the winter, but really, these are lures I use throughout the year. The difference is simply the speed at which I present them. Now during the summer in warm water, I work them really fast, as opposed to cold water where I fish them much more slowly.”

Jerkbaits are a type of crankbait, generally featuring a long, thin five to six inch body with a diving lip and two or three treble hooks. Instead of retrieving them with steady cranking, anglers point their rod tips down and use a series of jerks and pauses, varying their speed to match the mood of the bass. Jerkbaits have an erratic side-to-side action, and are usually most effective in water depths of less than 12 feet.

“I still use a jerk, jerk, pause cadence in my retrieve, just as I do in cold water,” Palaniuk said. “But now the pauses are very short, and my lure never really stops moving. It’s constantly darting back and forth, so it probably resembles either a fleeing or an injured baitfish.

“Summer bass have a high metabolism rate so they’re feeding more aggressively than they do in the winter, which is why the faster retrieve works so well. Bass must think it represents an easy meal, because a lot of quality fish hit it, not just small bass.” 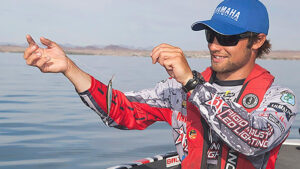 He used a jerkbait to help him win the 2013 Bassmaster Elite Series tournament on the St. Lawrence River in New York, an event in which he made daily one-way runs of more than 100 miles down the river and out into Lake Ontario. On the final day of the tournament, with the lake extremely rough, he used a jerkbait near a rocky shoreline to cement his winning catch.

“My favorite places to use a jerkbait during the summer are over wide, often featureless flats where bass are roaming rather than relating to any specific cover or structure,” Palaniuk said. “But when bass are suspended or around cover like standing timber or deeper ridges, I won’t hesitate to use the jerkbait there, too. I prefer to use lighter 10-pound fluorocarbon line because it allows the jerkbait to move freely from side to side, but around heavier cover, I may change to heavier 12-pound line.

“A jerkbait, especially when fished with a fast retrieve, will often cause bass to show themselves with a quick follow, even if they don’t actually hit it. You can make a quick follow-up cast with a jig or plastic worm and often catch them, and in that sense, a jerkbait is also a perfect lure to use when you’re searching for bass.”

Palaniuk’s favorite color for jerkbaits is a hue he calls mossback-shiner, which features a darker back with a lighter silver belly. Pearl-blue is another combination he’s used successfully. Overall, he prefers to fish jerkbaits in clearer water where he feels bass are probably feeding by sight; his fast retrieve makes the lure that much more tempting, since fish feel its vibrations but don’t really get a good look at it.

“Jerkbaits will catch bass year-round,” Palaniuk said. “And the reason they’re so versatile is because you can easily vary your retrieve speed to match the conditions. I always have one tied on and ready to cast, but among all the Elite Series pros, only a few of them fish jerkbaits during the summer like I do, and that suits me just fine.”