I’ve always been interested by the things we simply assume to be true in bass fishing. While some of these old notions may be correct, there are many that I think mislead anglers. One of the most deceiving, in my personal opinion, revolves around summertime fishing.

We’ve all been told ad nauseam to slowly fish deeper water in the summer. We’ve been told that the bass are lethargic, therefore our retrieves must match their moods—slow and deliberate. Sure, I guess that makes sense to some degree. But it certainly wouldn’t hurt to look at things from a different perspective.

The case for shallow water

Everybody has different preferences in bass fishing. Some are most comfortable dragging a big worm or jacking a big spoon over a deep-water river ledge—I am not that person. I like to fish as shallow as my boat allows, so I’ve really spent a lot of time figuring out the shallow summertime bite.

When the fishing really starts to stink (i.e. right now), I’m much more likely to head towards dirt-shallow water. Yes, I consider it my strength. But more importantly, I think those are the most active fish in the lake. The numbers may not be there, but if a bass is in less than 3 feet of water this time of year, it’s there for one reason; it’s time to eat.

That’s exactly why you’ll see wolfpacks of big bass cruising the extreme shallows in the late summer. These fish aren’t hanging out together because they’re buddies and they’re not enjoying a leisurely social hour. They know darn well that the pickings are slim right now and they’re working together to hunt and corral prey.

From my experience, these shallow bass are aggressive and they’re easy to catch. Instead of coercing a sluggish bass to bite by painstakingly dragging a soft-plastic in front of its nose, I’d much rather put the odds in my favor by targeting the shallow fish that are actively feeding. Again, there won’t be as many fish shallow as there will be deep, but it’s a numbers game to me. I want to put my bait in front of as many active fish as possible throughout a day of fishing. They’re either going to bite it, or they won’t.

With that being said, this tactic does require some discipline and at times, sheer stubbornness. You can’t go into this expecting to get 20 bites each outing. You might just get five bites some days, but they’re most likely going to be the “right” ones. Because of this, your execution becomes critical. This is the time you need to pay close attention to your equipment; it needs to be in tip-top shape.

The case for a run-and-gun approach

When we’re talking shallow water in the late summer, I’m fishing as quickly as I possibly can. I use very few bottom-contact baits and my trolling motor is set on at least 7/10. This certainly isn’t the only way to go about it, but I’ll explain why it’s my personal preference.

As we discussed earlier, you’ll rarely run across the motherlode of bass when you’re employing this tactic. There aren’t many bass hanging out in the shallows—just the ones actively feeding—so an angler needs to cover water at a rapid pace to make this a successful game plan.

I suggest making parallel casts to the bank with fast-moving reaction lures such as soft-plastic toads, buzzbaits, squarebills or Chatterbaits. Because I’m moving so quickly with my trolling motor, I normally use high-speed reels with at least a 7.0:1 gear ratio.

Unfortunately, you’re probably going to experience your fair share of short strikes. Even though we’re calling these shallow bass “aggressive”, they’re still not at their prime, so to speak. So you’ll have some slaps on your squarebills and some complete whiffs on your topwaters. That’s okay, because a wacky-rigged stick worm is your best friend in these situations.

I’ll keep a wacky rig ready on my front deck and ready to cast at all times. I don’t have the hook clipped to the rod and the hook and worm is hanging over my gunnel. Whenever I have any time of short strike, I’ll immediately cast that wacky rig to the same spot. If they’re going to bite it, they’ll probably bite it on the initial fall. Watch your line, because you won’t always feel the bite. If it starts swimming to the side, reel down and set the hook quickly—there’s no need to get into a feeling contest with ‘em. 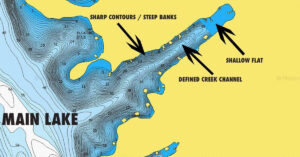 You’ll probably catch some fish by stopping in random pockets and creeks. But it’s important to consider the importance of adjacent deep water this time of year. While there will be a very few resident fish that live shallow all year, most of the shallow bass you’ll find right now don’t live there. They’re just stopping in for a quick bite to eat. That deep water is where they’re likely spending the majority of their time.

Spend some time looking at your maps, whether they’re on your graphs or paper. Pay close attention to creeks and pockets with tight contour lines, which are indicative of a quick depth change. That’s what attracts these big, shallow-water fish.

These sharp breaklines give them the best of both worlds. They’re able to reside in that cooler and more oxygen-rich deep water, but when it’s time to chow down, they’re a very short swim from an easy meal. Essentially, they can maximize their caloric intake while minimizing their energy output. It would be like a human living across the street from an awesome (and free) steakhouse.

I search for guts, or small creek channels, that butt up close to the bank and run closely towards the back flat of a creek. I took a screenshot of a very productive creek I like to fish this time of year—notice the long creek channel, the sharp contours close to the bank and the back flat of the creek in the light-blue color. If you can find something similar in your area, I think you’ll have a lot of success.

I’m certainly not saying that this is the only way to catch big bass in the late-summer months. You can catch ‘em deep, too, but if you’re impatient like me and like to move quickly and try to make things happen—make sure you try this on your next trip. When you hit it right, you can have some unforgettable (and sweaty) days on the water.