Topwater fishing is a major player throughout the summer months. The metabolic rates of bass are through the roof and they have no choice but to feed heavily in order to survive the oppressive water temperatures. Couple this with a myriad of forage options and you have a perfect storm for outstanding topwater action.

When the mercury rises, Legendary angler Denny Brauer keeps multiple topwater lures rigged and ready. If you can keep an open mind and locate some of his favorite summertime targets, he believes you’ll have some unforgettable days on the water.

Before we get into the specific areas, let’s quickly touch on some important information that will further your understanding of this special bite.

Why topwater and why now?

Summer bass fishing has a reputation for being tough and uncomfortable. But Brauer doesn’t quite buy it; a lot of positive things are likely happening on your favorite fishery as you read this article.

“In most bodies of water right now, you have three major events going on,” Brauer said. “The shad are starting to congregate into large schools, the frog activity is ramping up due to the increased vegetation growth and the bluegill are infiltrating the shallows. All of this is a perfect scenario for your favorite topwater lure.” 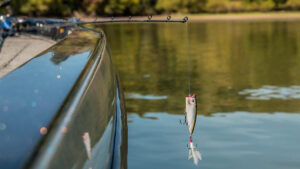 In addition to the virtual smorgasbord of available forage options, it’s also important to consider the biological needs of summertime bass.

“Think of it in human terms,” Brauer said. “When we work out, our metabolism kicks into high gear and we’re able to eat more without getting fat. The same thing is happening with bass right now. Their metabolism is as high as it’s going to be all year, so they’re voraciously hunting for more feeding opportunities. It’s purely a matter of survival, so they won’t hesitate to crush a strategically placed topwater plug.”

Get rid of your preconceived notions

When you think topwater fishing, what do you imagine? Most of us envision casting our lures in the golden hue of the early morning or late evening hours. While certainly effective, limiting yourself to these small windows can keep you from unleashing the full potential of the summer topwater bite.

“I’ve had some of my best topwater catches in the middle of the day in 90-degree water temperatures,” Brauer said. “You can’t put yourself in a box by only throwing topwater baits in certain times of day or in specific water temperatures. If you take anything away from this article, I’d say to have a topwater rigged at all times immediately following the spawn until the water goes below 50 degrees. I honestly don’t think it can be ‘too’ hot for topwater action.”

In the simplest terms, if you’re catching fish early in the morning on a topwater lure, don’t just put it down when the sun rises above the trees—keep throwing it until they stop biting. But to make the most of it, it’s important to focus on one particular factor.

“It’s all about the shade when the sun is high,” Brauer said. “As the sun rises above the trees, your shade lines are going to diminish considerably, but that’s not necessarily a bad thing. Summer bass want shade, so they’re going to concentrate into very small areas in order to find it. If a small bush is creating a two-foot wide shade pocket, you can bet there will be a bass around there. When the shade line is prominent, the bass could be anywhere; but when it’s hard to find shade, you can pinpoint exactly where they’ll be.”

Topwater lures are similar to a mechanic’s tools: Each one has a specific job. Understanding the various applications of your favorite topwaters will allow you to be much more efficient as you’re searching for the next big bite.

“Normal-sized poppers are going to catch a lot of fish in the summer, but I like targeting big fish,” Brauer said. “By simply increasing the size of your popper, you’ll often find yourself catching better quality fish. These lures seems to be best when the bass are coming off the spawn and begin to set up on secondary points. Isolated cover is a big-time target because a popper can create a lot of commotion while staying in a very small strike zone.”

When the water temperatures begin flirting with the 80-degree mark, Brauer turns to walking topwaters. He keeps one rigged and ready to cast because whenever he sees a shad flicker on the surface, he’ll fire a cast past the disturbance and work it through the area. These small shad flickers can be similar to an iceberg; you may only see a small amount of activity, but there could be much more action right below the surface that you can’t quite see with the naked eye.

“If you fish a lake with a lot of vegetation and overhanging trees, there’s probably an awesome frog bite happening somewhere,” Brauer said. “Frogs are the four-wheel drive of topwater baits; they’re nearly impossible to snag. Throw ‘em in the thickest cover you can find—which is where the darkest shade will be for the bass—and hang on. I’ve had some of my best frogging days on the hottest, most miserable days of the year.”

“There’s something incredibly special about a buzzbait in the summer months,” Brauer said. “I don’t know if it’s the added commotion or its ability to cover water so efficiently, but big bass are absolute suckers for it. If I’m looking for a really big bite, I’ll be throwing a buzzbait.”

Now that we’ve covered the nitty gritty, we’ll delve into Brauer’s favorite summertime topwater targets. If you can apply the previous information in these particular spots, you’ll have a great chance at getting on a solid topwater pattern.

Just as pre-spawn bass will use primary and secondary points as routine stopping points en route to their eventual spawning grounds, post-spawn bass will also utilize these same areas as they migrate to their deeper summer haunts; it’s essentially the same process, but reversed.

“Points are great places to find large concentrations of topwater bass right now,” Brauer said. “But don’t just run every point you see because you’ll waste a lot of time. When you get your first few bites, it’s essential to analyze everything about the point. Is it rock, gravel or clay? Is it a flat point? Is it a deep point?  These are the things you need to pay attention to. There’s always a reason for every bite and there’s a lot to be learned everytime a topwater fish shows itself.”

Post-spawn summer bass are notorious for suspending underneath boat docks. For those who like to pitch and flip jigs and soft plastics, this can be an obnoxious problem to overcome. But if you can break the mold and target these docks with topwater lures, you can catch a lot of the fish other anglers are leaving behind.

“If a bass is suspended under a dock, it only has to move about a foot vertically to attack your lure,” Brauer said. “They’re opportunistic feeders, so if a big bass sees what it thinks is an easy meal hovering right above its head, it’s going to eat it. This is also an easy bite to pattern. A lot of the times, your bites will happen in very similar areas whether it’s the outside shady corner, the wind-blown side or something similar. So start by fishing every part of the docks and after a few blowups, you’ll quickly be able to zero in on specific areas and cover water very quickly.”

In this case, we’re referring to vegetation in its sparser terms such as isolated shore grass and smaller lily pad patches. These areas can concentrate bass and allow the savvy angler to quickly determine a productive pattern.

“Irregularities are absolutely key when you’re fishing this type of cover,” Brauer said. “They create a strategic ambush point for bass, so I’m looking for small points or pockets and I’ll cast my topwater past the target and work it through these spots. This is also another another easy-to-pattern deal; over the course of a few hours, you’ll start to notice that your bites are coming from very specific areas in that shoreline vegetation.”

“I put this in its own category because it’s an entirely different ball game,” Brauer said. “You’re limited to a topwater frog you’re coming over the cover; not through it. It may look inpenetrable from the surface, but there are actually small tunnels underneath the bass will use for travel.”

When you’re surrounded by matted vegetation, it can be tough to pick it apart efficiently because it all looks so attractive. This is why it’s important to pay close attention to every little factor you can find.

“When you find good matted vegetation, it’s not because the bass magically appeared in that spot,” Brauer said. “They’re there because of its location and bottom composition. Key areas to focus on this summer include sides of points, points adjacent to deep water and hard bottoms.”

Although we’ve already mentioned shade pockets, they’re simply too productive to not mention again. Because these areas are often diminutive in size, Brauer prefers to use lures he can keep in the area for an extended period of time such as big poppers and frogs.

“It’s difficult to get too specific on this because literally anything that creates shade is a potential hiding spot for a big summertime bass,” Brauer said. “It can be the shade from a single dock piling, a small willow tree or a boat lift. As long as it’s shade, it deserves a few casts with a topwater lure.”

When the hot summer temperatures arrive in your area this season, tie on a few of your favorite topwater lures and look for these areas. Between the 5 options, you’ll be able to determine a pattern and catch a lot of quality bass.