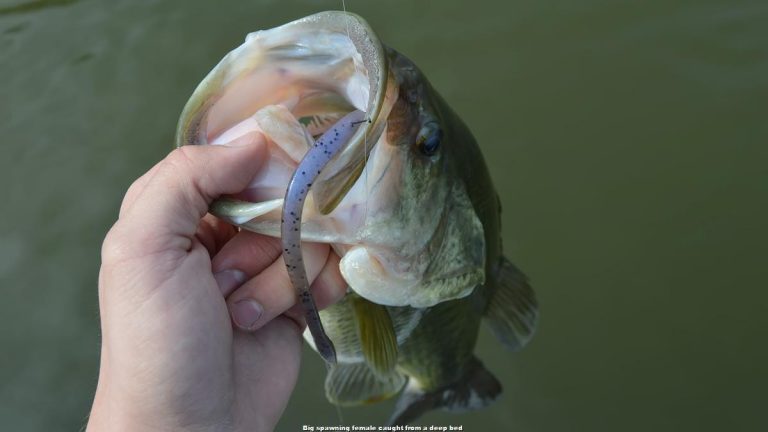 When anglers think of spawning bass, they often dream of shallow, protected waters chock full of giant bass on beds. This scenario sounds great, but if you can see the fish, other anglers can too.

Many don’t realize spawning fish can be found below skinny water nesters. In fact, in many of the lakes throughout the country, swarms of deep spawning bass get completely overlooked by other fishermen.

Bass will spawn deeper than most folks think. Smallmouth and spotted bass are known to spawn in deeper areas, but largemouth bass will happily make their beds away from the shallows as well. In this case, when we talk about bass spawning deeper, it is usually in lakes with extremely clear water. Fisheries like Lake Delevan or Lake Geneva, with visibility of more than 10 feet, are where Mui cut his teeth.

WHERE TO FIND THEM

On these fisheries, the bass will setup to spawn anywhere from 6 inches to 20 feet deep. It’s that 12-foot to 20-foot depth range we are talking with deep spawning bass. Although they are the same fish, the approach to finding and catching these fish differs from the shallow spawning fish approach.

Mui targets deep spawning bass both on the main lake and in the major bays. The key is understanding what is going on under the water.

“When targeting these deep spawners, you aren’t looking for shoreline flats or structure,” Mui said. “You’re really looking for the deepest edge of those main lake flats near a point or other drop-offs. I like to start my search where that steep drop comes up and levels out before gradually getting shallower .”

These areas can be at any depth throughout the lake, but he has found the most success in focusing on the 10 to 16-foot range.

Besides having the right water clarity and depth, the composition of the bottom is another important variable. Much like with shallow spawning bass, these fish are very particular about the kind of bottom they make their beds.

“If you can find a sandy bottom with a gravel mix, that seems to be best,” Mui said. “More than that, you need to avoid a silty or mucky bottom. Bass don’t like to spawn in that type of stuff.”

WHY TO TARGET DEEP

Mui chooses to target deep spawning fish because they are overlooked by the majority of anglers. They don’t see nearly as many baits as the bass up shallow do. Resulting in these fish being extremely aggressive and often easier to catch when you can locate them.

More than that, he has learned that these deep spawners will congregate in small areas when they make their beds. So instead of finding one female bass on a bed, you’ll find several.

“When a bass makes a bed out deep, they do it for a reason,” Mui said. “The bass likes what he has found, so there is most likely going to be several others with it. I have seen groups of smallmouth bass spawning that looked like the bluegill beds I used to fish as a kid. Where it will look like 10 yards of small moon-craters. Instead of a bunch of panfish in two feet of water, you’ll see groups of 2 and 3-pound smallmouth in 20 feet of water. It’s incredible.”

He has also found these fish less affected by the weather fronts associated with Spring. Even if a drastic cold front passes through, the bass spawning out deep will be relatively unaffected. The surface temperature of the water may drop significantly, but there is little change in 12 to 20 feet of water. You can count on these fish to stay put until they have finished spawning. 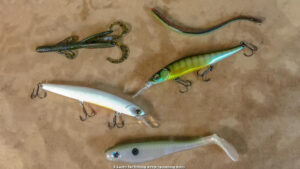 Mui does his best to keep it as simple as possible when it comes to bait selection for these deep spawners. Here are a few different methods that have worked for him over the years.

Often times Mui is not actually looking directly at these deep spawning bass. Instead, he has an idea of where these fish set up and will “go fishing” to cover water and hone in on where to focus his efforts. When covering water, it is hard to beat ripping a jerkbait through deep spawning areas. His best producers are a Megabass Vision 110+ and an Ima Flit.

He opts for translucent colors like Tennessee Shad or Pro Blue when the sun is out, and solid color patterns like pearl or chartreuse Sexy Shad when it’s overcast. Mui explained that the biggest key is to keep the bait moving fast, unlike your typical early Spring jerkbait fishing. He uses a 6-foot, 8-inch medium action Shimano Crucial with an extra-fast tip to help him rip the jerkbait along—pausing it for only a second at the most.

“With the jerkbait moving that fast, the bass won’t have time to think about it,” Mui said. “They’ll see it dancing above their heads and will absolutely crush it. It’s one of my favorite ways to fish.”

Once Mui has located a prime deep spawning area, he will employ a bait to bump the bottom with. He favors a Texas-rigged Zoom Baby Brush Hog on a 3/0 EWG hook.

Mui likes using a 3/8- to 1/2-ounce tungsten weight with 12- to 15-pound fluorocarbon for added sensitivity and to downsize his profile. He also advises dying the tails of the bait chartreuse to imitate panfish trying to rob the bass’ cradle. He’ll both cast to fish he is looking at and blind cast this bait to areas he believes to be spawning beds. The retrieve is simple: drag the bait, keeping contact with the bottom until you feel a bite.

If the conditions are right, and he can visibly see the bass he is fishing for, Mui will rely on a drop shot. Mui chooses a wacky-rigged 4 1/2-inch Roboworm or other finesse worm in most cases.
He’ll use the smallest weight he can to avoid spooking the bass and a slightly longer leader than usual—around 18 inches. Because these deep spawners are generally un-pressured, if he can see them, he can usually get them to bite on the first few casts.

Finally, he’ll employ a medium-sized swimbait, something like Berkley Split Belly on a 1/4-ounce jighead. You aren’t always going to get the fish to commit and eat the swimbait, but it will fire a bedding bass up and get them pursuing your baits.

“Little panfish or other baitfish will mess with the bass’ beds and eggs,” Mui said. “So when you cast that swimbait to them, it triggers that instinct to protect their nests. For lack of a better description, it pisses them off.”

If Mui has found some fish on beds that he can’t get to commit to his Baby Brush Hog or his drop shot, he will cast the swimbait in that area to try and fire the fish up. Once he sees them getting aggressive, he’ll cast right back to them with one of his bottom baits to put them in the boat.

As the air and water temperatures rise throughout the country the bass will be hearing nature’s call and getting ready to lay their eggs. There is no doubt that folks will be picking bass off their beds in the shallows, but they may be missing some of the best fishing out deeper.

If the conditions set up right in the lake you are fishing, it would be wise to look around a little deeper than usual. When you find these deeper fish, you’ll be in for a fun day of catching aggressive groups of spawners.