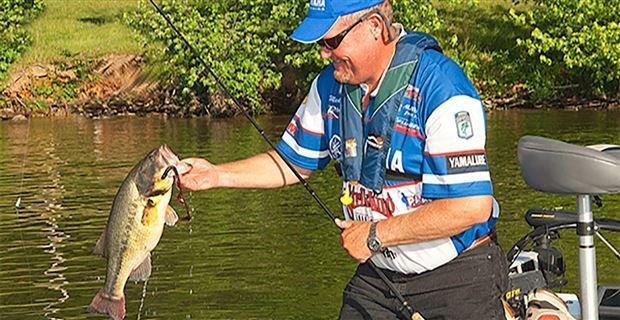 Warmer-than-normal winter temperatures have shuffled bass spawning schedules on many lakes throughout the country this spring, but Mark Davis has seen it before and the veteran Yamaha pro knows just how to approach the problem.

“With the milder winter, bass began spawning much earlier than usual this year, so when a fisherman heads to a lake this month, he’s probably going to find some bass in post-spawn, others on spawning beds and even a few still in the prespawn stage,” notes Davis, a three-time B.A.S.S. Angler of the Year and winner of the 1993 Bassmaster Classic. “The fish are doing a lot of different things, but not a lot of them are doing the same thing.

“It’s a real curve ball, because some bass may be in water only a foot deep while others can be in water 20 feet deep, and the rest of them are somewhere in between.”

The first solution Davis offers for catching these fish is for an angler to simply begin fishing the way he wants to fish, using the lures and techniques in which he has the most confidence.

He should decide which type of spawning fish he wants to catch, choose an area of the lake where that is likely to be happening and then concentrate entirely on those fish.

For example, if he prefers to go after post-spawn bass, Davis suggests looking for slightly deeper water in the 15 to 20-foot range and fishing a deep-diving crankbait, a football head jig or a Carolina rig and staying in that area of a lake.

“If you decide on this approach, you really need to forget about any shallow water bass,” Davis says. “Because if you don’t commit totally to what you’re doing, you’ll never fish as effectively as you need to. Just remember, you’re probably not going to find a lot of bass because they’re so scattered.”

Davis describes his second—and completely opposite—solution as “junk fishing,” in which a fisherman does work both shallow and deep water. If he sees a potential shallow water target, he can cast to it, then turn and make his next cast toward standing timber in deeper water. He might follow with a third cast ahead of the boat to another spot. Junk fishing usually involves a lot of running to different places and it frequently means fishing entirely new water each day. This spring, it’s been a technique used by many of the tournament pros in both Bassmaster and FLW events.

“This is how I fished the recent Elite tournament at Toledo Bend,” Davis admits. “I started the tournament in deep water looking for post-spawn bass, and I caught 24 keepers the first day, but all of them were small fish and I only weighed in about 12 pounds. You can’t even place in a Toledo Bend event with weights like that, so I changed completely. The rest of the tournament I junk-fished water down to about 10 feet, working shallow for spawning and pre-spawn bass, and I eventually finished 36th overall.

“It wasn’t the way I wanted to fish, but on Toledo Bend there is a huge bass population so I actually moved up in the standings each day. On lakes that don’t have a large population of fish, a spring like the one we’re having now can really make fishing difficult.”

Another part of the problem, adds Davis, is the increased fishing pressure bass are receiving now, which also makes them more difficult to catch. Because fish are seeing more lures than ever before and many are being caught and released multiple times, anglers need to remember to keep trying different lures and retrieves until some combination starts bringing strikes.

“We’re just having a ‘trickle-down spawn’ this year,” the Yamaha pro concludes. “We’re not seeing waves of bass moving shallow to spawn all at once or finding big post-spawn schools concentrated on offshore structure or cover. Conditions like this occur periodically, which is why I knew I needed to develop these two different fishing strategies, and I’ve been able to use them for years.”