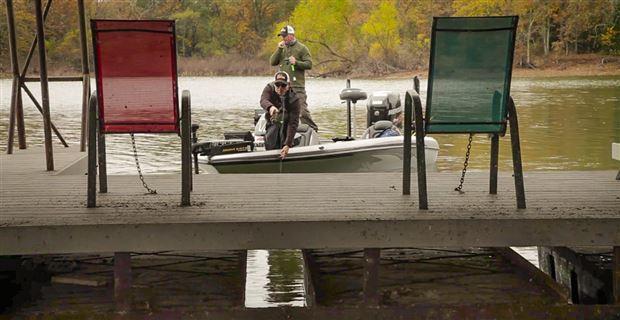 FLW Tour pro Andrew Upshaw is pretty good at finding bass, but at times, the fish are so stubborn, he just has to shoot them. And probably not the way you’re thinking. He shoots a bass lure under docks to get to pressured and hard to reach bass.

Pulling a page from the crappie fishing playbook, Upshaw’s fond of sending a bait into the shadows beneath docks of all shapes and sizes with a tactic known as shooting. Considerably more user-friendly than the skill-heavy skipping technique, shooting employs a method that looks more like archery than fishing.

Pointing a spinning rod and reel at your target zone, you pull the bait backward to load the rod similar to a bow and arrow. Releasing the bait while maintaining disciplined rod control sends the bait into the shadows where bass find their cozy quarters and ambush opportunities.

“Those fish under those docks are suspending most of the time because that’s where they find the darkest point and the best ambush spot,” Upshaw said. “You’ll definitely catch them by skipping a jig, but a jig will fall as fast as you can peel out line.

“What you need is a bait with an extremely slow fall; something that stays in their face longer.”

While a lot of anglers have done this for years with lightweight tubes, Gene Larew recently introduced the Bass Shooter. Designed to maximize the shooting momentum with a lengthy skipping motion prior to settling, this streamlines 3.25-inch lure features a flat back with a hook alignment guide a spade-shaped tail.

“The shape forces the bait to wobble back and forth and glide,” Upshaw said. “This also gives the bait more speed with less drag, so it’s going to shoot farther. The spade tail gives the bait just enough action when it’s falling or whenever you jerk it.” 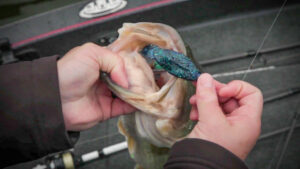 The Bass Shooter’s shape creates a wide glide that eventually melts into a sharp downward spin. This change in action is the trigger they were looking for in this type of bait.

Gene Larew facilitated the shooting presentation by creating the Pinhead Hook, which features a wire weed guard and a weighted shank for even weight distribution. By weighting the 1/8-ounce Pinhead with lead and the 1/16-ounce with tin, Gene Larew maintained equal hook sizing for consistent gliding action that resembles a dying shad.

Completing the dock shooting package are the Gene Larew Pull Tabs; originally created for crappie, but equally beneficial for bass pursuits. These tabs alleviate the anxiety anglers might have with grabbing a hook to shoot a bait out of their hand.

“The tabs give you the leverage to really load that rod without the worry of hooking your hand,” Upshaw said.

“This gives you peace of mind so you can pull a little harder and get an extra 5-6 feet.” 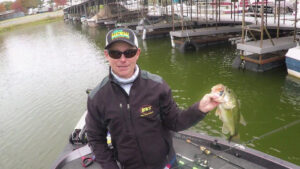 As for line, Upshaw likes Lew’s high-vis yellow braid for the visual cue of light bites. If the line stops or jumps — set the hook. Capping the braid with 10-pound fluorocarbon leader provides a good balance between stealth and abrasion resistance.

Suffice it to say that any bass parked under a dock will not be thrilled about leaving his cozy digs, so braid plus fluoro allows you to put the heat on him. But most spinning rod setups will work if they have a little backbone to send the lure flying for some dock shooting fun with pressured bass.