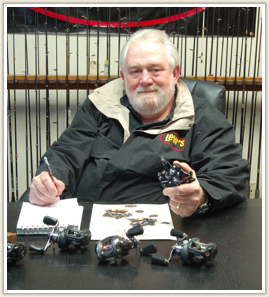 The good news for anglers everywhere is that Lew’s ® is back. Not that the once highly popular fresh and inshore rod and reel brand was ever truly dead, but it certainly had faded from the spotlight in recent years. It’s back now though and in a big way, with several new models of baitcast and spinning reels, and a full spectrum of rods.
The rods and reels are totally new designs with the latest in features and materials, keeping with the tradition of innovation and function that the late Lew Childre originally demanded when he launched the Lew’s brand a few decades ago.

His tear-drop-shaped BB1 came with innovative features never seen before in a revolving spool reel, including the disengaging levelwind and “palming” side cover.

Childre had a significant role in rod development, too, contributing to Fuji’s design of the pistol grip handle and many other introductions, including the use of ceramic inserts on rod guides. His list of “firsts” and other equipment improvements is long and impressive, and he was still actively bringing ideas and designs to the table when he died in a plane crash in 1977. His name and the Lew’s brand have lived on ever since. Only in more recent times has Childre been getting credit for his contributions. He was named one of “the 35 most influential people” to the sport of bass fishing in a 2003 Bassmaster article.

Late last year, fishing industry veteran Lynn Reeves acquired the Lew’s name and many affiliated trademarks, including Speed Spool, Speed Spin® and Speed Stick® , from the Lew Childre family. The transaction marked another important milestone in the brand’s 60-year history. Reeves is a longtime fan of Lew’s products and believes strongly in Childre’s original quest for lighter, faster and stronger fishing tackle. His promise from day one of ownership has been to return the brand and product line to a place of prominence in today’s fishing equipment lineup.

“Some brands simply epitomize the sport of fishing the way it was meant to be, and Lew’s is among the elite few,” Reeves said. “I couldn’t be any prouder than I am to have this opportunity to put the Lew’s product back in anglers’ hands.”