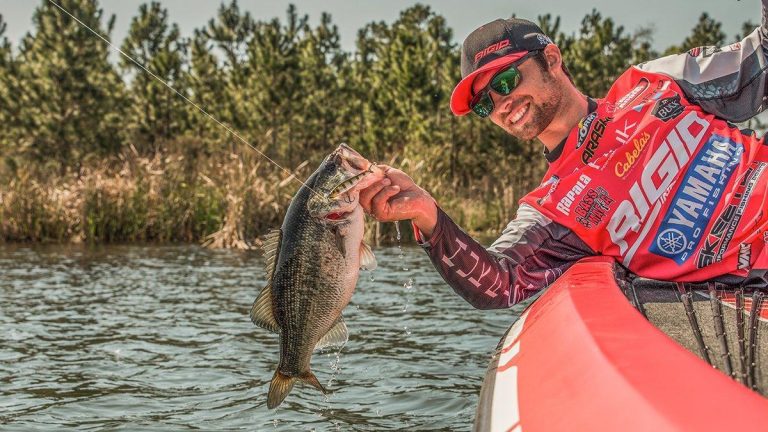 What’s the difference between a good bass angler and a great bass angler?

That’s the million-dollar question for many of you reading this article. Unfortunately for us, there isn’t a single, all-encompassing answer. If there were, I probably wouldn’t have a job. But I’ll be honest with you: I got really darn close to that answer when I recently talked with 2017 Angler of the Year Brandon Palaniuk.

It wasn’t some stuffy, rigid interview with a bunch of generic questions and canned answers. That kind of stuff does not and will not make anyone a better fisherman. You come to this website to learn how to be a better angler, so I wanted to learn the how and the why behind his monumental success and let you in on our hour-long candid conversation. It was one of the more interestingâ€”and revealingâ€”conversations of my career.

Most of all, I was curious to know whether Palaniuk’s success revolved around his technique or his mind. Had he become really good at a bunch of techniques or had he simply learned how to read and break down water more efficiently than other anglers?

“Honestly, I could have fished the entire year out of one of my tackle trays,” Palaniuk said. “It was all about simplicity this seasonâ€”just meat and potatoes-type of fishing. I had the exact same stuff in my boat. It essentially came down to a bladed jig with a Zoom Z-Craw trailer, a 3/8-ounce swim jig with a Zoom Super Speed Craw, a Storm Arashi Top Walker and a drop shot.”

In his opinion, it was his open-mindedness that allowed him to consistenly stay on top of the bass. Stubborness can be the Achilles’ heel of even the most naturally gifted angler.

“You absolutely have to have an open mind in this game,” Palaniuk said. “Even if you’re just fun fishing, you cannot be stubborn. Fish live based on conditions; they don’t have a time clock and they never have to be somewhere at a certain time. They’re in an ever-changing environment. As humans, our whole lives are dictated by time. Joining those two drastically different worlds can be really difficult if you’re not willing to roll with the punches and keep your wheels turning.

“I looked at maps of every lake and found what I thought were their spawning grounds. From there, I changed my gameplan based on the current stage of the spawn. I essentially worked my way out from their spawning locations. The spawn is really the only thing we can use as a baseline when finding fish. You know every year they’re going to spawn. It may not be the same time every year, but if you can figure out when they spawn, you’re ahead of the game. You’ll know where they’re going, now you just have to figure out how they get to and from that location.”

“They’ll be where you find ’em”

Palaniuk chuckled as he recited that quote on the phone. He admits that it sounds pretty stupid, but it’s what helped him win one of the most coveted trophies in bass fishing.

“I know it seems like a crazy quote, but it keeps me searching and helps me keep the fish honest in a way,” Palaniuk said. “If the fish aren’t where you are, they’re somewhere else. Don’t try to force an area on any body of water. You’ll know when you run into ’em. If you have to ask yourself if you’ve found ’em, you probably haven’t.”

Palaniuk started practicing a little differently this season. Instead of stressing over the menial details each practice day, he’d purposely try to find as many small clues as possible. He never tried to dial anything in until the tournament began. If you’re too honed-in on one bite or technique going into competition, he believes you’re much less likely to adapt to changing conditions.

“I just barely wanted to scratch the surface in practice,” Palaniuk said. “I’d move a lot throughout practice because eliminating water is just as important as finding the mother lode. Each section of the lake or each pattern you eliminate is one less thing you have to check or worry about during the tournament.

“I wanted to see as much as I could during practice, especially during the first two days. Even if I thought I had found potentially winning fish, I always believed I would find something better. This process allowed me to focus on smaller, more precise areas during the tournament and learn how they were using and relating to it.”

It’s no secret that some anglers prefer to spend their practice time on the phone talking to local sticks instead of hammering it out on the water. You won’t find many people willing to talk about it, but it was important that I asked Palaniuk his thoughts on the issue. Did he partake in the information game this year? Why or why not?

“I don’t seek out information because it doesn’t do me a bit of good,” Palaniuk said. “Going to a body of water, doing my own research ahead of time to get a general understanding of the size of fish and type of water and just fishing the current conditions helps me more than any inside information ever will. I have enough confidence in my own abilities and more importantly, I want to own any success I might have. If I do it my way, no one else can take credit for my wins. It’s 100 percent my doing and that’s the way I want it.”

He also stressed the importance of everyone, whether they’re a tournament angler or recreational angler, doing their own research.

“I love interacting with my fans on social media,” Palaniuk said. “Meeting them in person is even cooler and I really enjoy sharing things I’ve learned. But I don’t like it when people ask me for specific spots on various lakes. If you want to better yourself, you need to figure it out on your own. If you’re just fishing locations, you’re not learning. When something changesâ€”and it will changeâ€”you don’t have a full understanding of why those fish are there. It’s nearly impossible to adapt if you fish that way. When you find the fish on your own, you have a better understanding of the entire area or pattern.

“You have to put in the work and go do it. If you really want to be the best angler you can be, you have to constantly adapt and change. If you’re not doing it on your own, you’re really shorting yourself. You may have some wins occasionally, but over time you’re going to get your teeth kicked in. You can read every Wired2fish article out there, but unless you apply it on the water, it won’t do you any good. If you look at all the hours I’ve spent on the water in a bass boat, I’ve not caught them a lot more than I have caught them. But it took 21 years of standing on the deck of a boat to learn it.”

It’s a known fact that Palaniuk fishes for the win in every tournament. In an age where professional fishing can become such a financial stress to both the anglers and their families, it’s something that very few anglers choose to do.

“I cannot wrap my mind around going out and not fishing to win,” Palaniuk said. “There’s a $75,000 difference between first and second place. Why would you fish for anything other than first place? Everything you want is there. I’ve matured enough in the last seven years to be able to fish for the win and stay true to it, but still have enough damage control to avoid a disaster.

Does fishing speed play a role?

After following professional fishing for years, it’s fascinating for me to watch the difference in fishing styles on the water. Some guys move like molasses in January. For others, it’s a wonder how they have any battery power or gas left at the end of the day. Palaniuk was able to find a delicate balance between the two styles this year.

“It all depends on where I’m fishing or what I’ve found,” he said. “As I dial in on a pattern, I feel like I start slowing down a lot more. I may fish a single brush pile for 10 minutes, but then I’m pulling up my trolling motor and moving somewhere else. I guess you could say that I fish slowly, quickly. I really started focusing on the most high-percentage areas I can find. I’m not fishing a lot of ‘in-between’ areas.

“I’ve also learned to trust my gut more. If I drive past something and it catches my attention two times, I’m going to fish it. That’s kind of my rule. There has to be a reason why, after 21 years of trying to learn bass behavior, that it’s standing out to me. Somewhere in my brain there’s a light bulb flickering that says there may be a fish there. If that happens to you on the water, spend a few minutes and go fish it.”

Blinders on the water

If you put most anglers on a body of water surrounded by the best fishermen in the world, we’d be more apt to worry about their strategies instead of our own. Imagine having Jason Christie and Jacob Wheeler breathing down your neck in the AOY standings and they’re just around the bend. You’d probably be a little curious as to what they’re doing.

For Palaniuk, however, it’s more of a strategy game.

By now, this conversation had gone on for an hour. As Palaniuk got closer to his elk-hunting destination and service became increasingly worse, I had to ask one more thing before we lost connection.

“Dude, real quick. What’s the one thing you want people to learn from this article?”

“That’s an easy one,” he said through crackled audio. “Whether you’re a new guy and want to do this for a living or you’re a weekend guy, doing it your own way and figuring ’em out yourself is the most rewarding thing about this game. It’s something nobody can ever take away from you.”