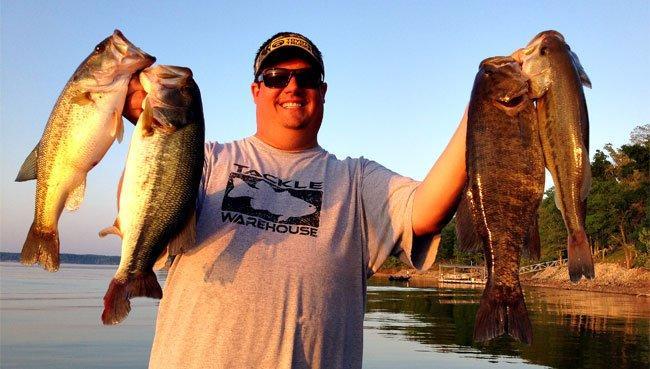 The sun sweltered anglers in the blistering rays. The lack of wind and clouds oppressed the skin and angling spirit even more. The doldrums of many casts and few bites lead to doubt, indecisiveness, constant changes and adaptations with little success. Sounds like the summer doldrums, but it was the end of March in the Midwest.

The bite on many lakes and rivers across the country has been feast or famine over the course of the last month. An unusual heat wave has spread throughout much of the country. Lakes that normally see 50 and 60 degree water temperatures have seen 60 and 70 degree temperature ranges. Some of the lakes in the south have already breached the 80 degree mark.

The fishing has gone from great one day to fishing in a ghost town the next day. So what’s going on? The weather is moving the bass too rapidly some have hypothesized. But I have another theory. Maybe we’re just ahead of the fish. It is after all April and not July. The fish have been on the same routines for years, and especially on lakes that fluctuate, there can be other factors more important than water temperature to move fish into predictable places.

I’ll give you an example. The water was 74 degrees on the lake I fish the other day. Normally it’s barely 60 degrees this time of year, nearly 15 degrees ahead of the curve. I assumed the fish have since made a mass exodus to the banks and gone shallow. However the lake is just a little more than a foot over summer pool. It has another 3 ½ feet to go before it gets where the fish like it and lots of cover enters the lake for shallow fish to relate.

The moon phase also is not quite there for them to be up there spawning. But it’s getting close. So over the last week I have seen fish spawning. But they are small fish. Why? Everyone always says the big fish spawn first. That might be true under perfectly typical conditions. But throw in the wrinkle that says the right kinds of bottom substrate are not in the depth they want to spawn and now you’ve got a situation where the water is warm enough but the locations are not right for the bass to pull up there. Not to mention bass are keenly aware of length of days and moon phases and their biological clocks work on those timers as well as water temperatures.

I spent one whole day going shallow this weekend, from mere inches of water out to 6-10 feet. I caught some fish but not like I thought I should have caught. I got off the water that day and was really beating myself up about not catching the fish better. I had caught so many fish off beds prior to that on other lakes and locations down lake last weekend. I just figured I should have found them better with that warm water up shallow.

I threw more than 15 different baits and techniques at the fish. Like I said I caught some fish, a small limit that didn’t weigh much. But it was such painful and hard fishing I felt like I was missing the boat for sure. I spent a lot of time looking for bedding fish with a good pair of polarized sunglasses. I tried crankbaits and Carolina rigs. I threw Texas-rigged plastics, spinnerbaits and chatterbaits around shallow cover. I threw big baits and little baits, and nothing seemed to matter.

The same thing happened at the FLW Tour on Table Rock. Everyone saw bass on beds and assumed all the fish were up spawning because of the unseasonably warm weather, but in the end, it was those staging fish waiting for the right time to move up that proved to be what much of the top 10 anglers were targetting.

So I rethought my whole approach. What I’m learning is the fish need multiple variables to line up for them to run to the banks, or swim as the case may be. Just because it’s warm and we think they should be up there, doesn’t mean they are. So you move back out to the main lake and start your search all over again. That’s what I call being ahead of the fishing curve. I went to where I thought the bass should be, instead of starting where they were last and working from there.

Obviously, if you don’t fish a lot with consistency it’s hard to know where the fish were or are at any given point in the year. But the spring is a rapidly progressive transition for the bass. They are out on the main lake, then move to secondary structure in bays in creeks, then up shallow in the pockets and flats, then they begin working back out, stopping along familiar secondary areas and shallow cover laden areas until the finally reach their summer destinations back out deeper yet. Sometimes, this all happens in a month. Sometimes, it seems like it takes several months depending on factors like water clarity, water levels and water temperature.

We can also be ahead of the baitfish. I still find that understanding baitfish migrations is the last great bastion of understanding in bass fishing. When we fully understand where and when a crawfish, shad, smelt, hitch or other thing a bass likes to eat moves and changes, we’ll be able to better predict where bass will move to next. Follow the bait and you’ll be on the same path as the bass.

I was talking to a friend who is an accomplished angler down south, winning many tournaments on lakes near his home. He chuckled about how everyone is so upset about the fish not being where everyone thinks they should be because of the warm weather, clear but low water levels and summed it up best:

“This time next year, the lakes will probably be 5 feet high, and the water will be cold and colored. We’ll all be complaining that the bite is so bad because of the exact opposite conditions we have now.”

Think a few steps ahead of the bass, but don’t beat them to the punch. Trust me I was there last week. It was awfully lonely without many bass to keep me company. It wasn’t until one evening this week when it all clicked and I caught back up with my greenback friends by going to where I last found them and then working towards where I think they’ll be next.

Once I figured out where they were holding, I ran a lot of water quickly and we caught bass on every stop. From there it’s just fine tuning your presentations to get the best bites and the most fish from each area you find.

Isn’t it funny how we over think this fishing game sometimes?