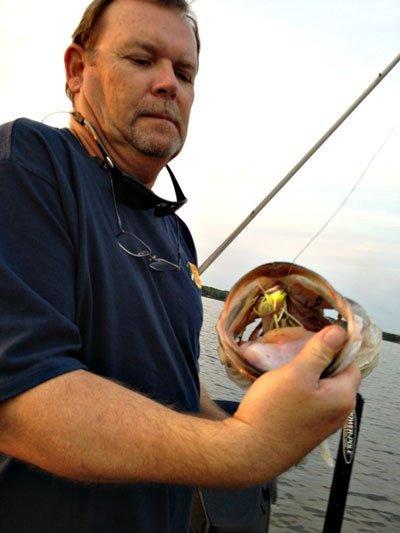 Going into the EverStart Series event on Lake Seminole, I felt fairly confident that the winning fish would come primarily off beds. However with the warm winter that we had in the southeast this year, the spawn happened faster than expected on Seminole. Although there were a few fish left on beds, the majority had already come and gone. With only a handful of spawners left to go around, I chose to cover as much water as I could in search of shallow fish.

I spent about 90 percent of my practice beating the banks with only 3 or 4 bites a day to show for my efforts at the beginning of the week. I found a few fish on bed and was able to catch a couple flipping thick mats and on moving baits around shoreline grass but nothing that I had any confidence in.

Now I had never fished a multiday tournament on a shad spawn, but I knew enough about it to know that if I could find it, I would have a shot at winning. For those of you who donâ€™t know, shad spawn when the water temp reaches 70-75 degrees. These shad come into an area by the hundreds and rub up against whatever cover is in the area whether it be rocks, stumps or vegetation.

While these shad are preoccupied, bass gorge themselves on the protein packed snacks and make themselves susceptible to almost any shad imitating bait at the same time. This concentrates giant bass into a small area and makes them readily available. Thereâ€™s just one drawback, it only happens for a short period of time early in the morning, for just a few days usually at its peak.

So itâ€™s a huge gamble to rely on finding a shad spawn as your primary pattern in a tournament. However, knowing that it only lasted for a little while in the mornings, I would run as many areas as I could in the first 30 minutes each day towards the end of practice. Doing so I revisited a small backwater in the Flint River where I had found a few fish on bed at the beginning of practice.

Three days prior to the tournament, I had about 13 or 14 pounds of bites in that area on a frog. I set the hook on a 2-pounder and 3-pounder and shook off five more quality fish but didnâ€™t see any evidence of a shad spawn. This being the most action I had seen in one place I committed the area to memory and planned to stop back through prior to the event.

That afternoon my father, who was fishing as a co-angler and coming down to practice with me, made it into town. He got there around 5:30 PM and we decided to go back out on the water for a while. This was one of the most critical decisions of my whole practice. I took him to a place in Spring Creek where I thought we might catch a few fish due to the late afternoon bite. We caught 5 or 6 fish buzzing soft plastic topwaters and swimming a NetBait Swim jig but nothing weighing more than 3 pounds.

While idling out back towards the channel, Dad noticed a shad running across the surface. I shut off the engine and he fired a couple casts in the general direction. He abruptly caught a 5-pounder, so I got on the trolling motor and started easing around. In the last 20 minutes of daylight we had five fish for about 18 pounds.

We went back out the following morning and duplicated the occurrence on the next point down and thatâ€™s when it started to develop into a pattern. I found fish on four points, fishing long sandbars, sprinkled with scattered leafy stalks of vegetation in about 3 to 5 feet of water. There were multiple beds in each area and some really big fish falling to different shad imitators, the biggest being a 7 1/2-pounder that I caught on a Jackall Bowstick.

Planning to fish this as my primary pattern, I returned on the final day of practice with my dad to the backwater in the Flint River where I had found fish to see if I might still be able to catch a 13-pound limit there if I needed to. I asked my dad not to set the hook when we started in and about three casts later I had a 4-to-5-pound bass annihilate the frog I was throwing. I shook the fish off and about three casts later the same thing happened with another giant.

In about 15 minutes I had 10 bites of which the best five would have weighed between 18 and 22 pounds. We were both in disbelief but needless to say ecstatic about what I had found. Though there were no immediate signs of the shad spawn, I knew I had stumbled on the mother lode and that had to be the reason the bass were there.

On day one of the tournament, I started in the back water and had the 18-8 that I would eventually weigh by 9:30. I caught four 4-pounders and a 2 1/2-pounder without ever leaving the area. I used a homemade 3/8-ounce-double-willow-leaf spinnerbait with a blue glimmer skirt and a NetBait Swim Jig with a NetBait Paca Chunk trailer both on 7-foot, heavy-power Duckett rods and Lewâ€™s 6.4:1 Speed Spools.

On day two, I returned to the shad spawn hole but was greeted with sunny skies in place of the cloud cover that we had had on day 1. As a result the shad spawn bite lasted a mere 15 minutes, and I was only able to boat four small keepers for about 6 pounds.

I made the decision that saved my tournament by opting to leave the backwater and run my Ranger as hard as my Mercury would push it 35 minutes south to Spring Creek where I was able to work the sand bars for about 3 hours and catch two 3-pounders and a 4-pounder all on the Jackall Bowstick. Each fish that I caught came with my Power-Poles down, fan casting the topwater over the submerged vegetation. 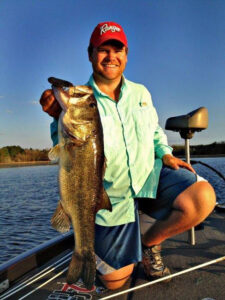 Leaving myself 20 minutes to make one more round through the backwater, I ran back north and was able to cull with a 3-pounder on the spinnerbait with only a few minutes to spare. My 15-6 was enough to move me from sixth to fifth and secure a spot in the top 10 to fish on the final day.

On day three, I started in the backwater once again, and within 20 minutes, I had about 15 pounds including two weighing more than 4-pounds all on the spinnerbait. I eventually ran south again to Spring Creek but was unable to fish my areas affectively due to strong winds. I finished the day with the same 15-10 that I had caught early in the backwater and placed fourth in the tournament once the scales closed.

Brandon McMillan won the event and Rodger Beaver finished second by one ounce both also primarily fishing a shad spawn. JT Kenney finished third on fish that were also relating to shad, though he did not believe the shad were spawning yet. The deep bite didnâ€™t seem to play as much of a role as I had thought going into the tournament. Though some fish were surely caught deep, the top contenders caught most of their fish in less than 5 feet of water.

McMillan used white 4×4 Swim Jigs, white buzzbaits and white frogs to take advantage of the shad spawn in one key area 45 miles from the launch site.

Here is a look at Shaye’s tackle for this event. 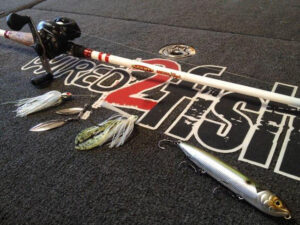