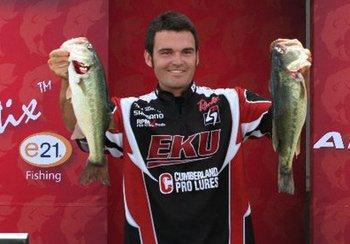 College angling experienced explosive growth the last two years with full divisional trails, college rivalries and even scholarships to college for highly recruited anglers. In fact we believe a lot of the next superstars in professional bass fishing are already fishing in the college circuits. Just like at the professional levels, some of the same names keep showing up regardless of the tournament circuit. One of those names is Tyler Moberly.

Moberly fishes for Eastern Kentucky University (EKU) and has been fishing college circuits for more than three years. Moberly comes from a fishing family. Many folks will remember his father, Terry Moberly who not only won $100,000 in Feb. 2009, but also won $1 million last year as the grand champion in FLW Outdoors Fantasy Fishing contest.

Now Tyler is making a name for himself. Earlier this year, he won as a co-angler in the BFL Mountain Division event on Dale Hollow. It was a brutally tough tournament, and Moberly was the only co-angler to bring more than three bass to the scale.

As part of the EKU fishing team, however, he’s really begun to make his mark on fishing. He won the first open invitational of the BoatUS Collegiate Bass Championship series on Kentucky Lake with partner Kyle Raymer. He also won the College Bass East Super Regional on Clarks Hill with former partner Richard Cobb. And most recently he won the College Bass National Championship on Lake Brewer, a lake in Arkansas that he and his partner Jonas Ertel had never seen or wet a line on. Just this month, he was named to the FLW Outdoors Magazine All-American College fishing team. Earlier this year, he and his partner finished ninth in the first FLW Outdoors College Fishing National Championship.

So how does an angler from eastern Kentucky get to the top of college fishing?

“I don’t know; I think there are just a lot of good fishermen in Eastern Kentucky and a lot of tough fisheries,” Moberly said. “We cast a jig a lot. I learned to cast a jig from fishing as a co-angler with John Devere. The Deveres are probably the best jig fishermen in the nation.”

The Deveres are regular winners in Kentucky tournaments. John fishes the FLW Tour as a pro and Mike won the FLW Tour co-angler title this year on Lake Guntersville. To say Moberly has had some good schooling would be an understatement. But he’s proven his merit among the best of his peers at the college level.

“At all the tournaments I’ve done well, I’ve caught my fish on a  Cumberland Pro Caster or Cumberland Football jig,” Moberly said. “With either black and blue or Barren Craw, I can go just about anywhere and catch bass. Of all the jigs I’ve thrown, it comes through the rocks and cover better. [Brian Wilson] has the perfect head and the best hook I’ve ever used in a jig.”

Besides his confidence in those jigs, as much as his success has come from how he fishes a jig. Where most people either flip a jig to cover or throw a football jig on offshore structure, much of Moberly’s success has come in between. A technique born in eastern Kentucky is casting a jig on rocky banks and covering what a lot of anglers consider that mid-range area, where most guys throw a crankbait or something that covers all the water quickly. Instead of fishing directly on the bank or way offshore, Moberly and others had much success on lakes like Cumberland, Dale Hollow and Barren River casting a jig on “do-nothing-looking” rocky banks and crawling them painstakingly back to the boat.

“John Devere taught me to always throw a 3/8-ounce jig and to learn to weigh the jig,” Moberly said. “When you do this, you always know how heavy the jig feels on your line, and it helps you detect the bites that many people miss. A bass rarely knocks slack in your line when it bites a jig. Most of the time, you just feel a change in the weight of the jig. That and always fishing slower than most people and really dragging my jig on the bottom I think is why I have such success.”

If Moberly is fishing a point, he might make a precise cast across or down the point, but a lot of times when he’s fishing something like a main lake pocket, he’ll fan cast to cover the whole pocket. Then slowly drag his jig back over every rock, often finding subtle pieces of cover others miss.

“If you don’t have a jig tied on, it just seems like you’re going to get beat,” Moberly said. “Anytime I’m around rocky banks or deep water, I want to have a jig in my hand. It’s so versatile and can be fished in so many places and so many different ways.”

Moberly always fishes his jig on the same rod, a 7-foot, medium-heavy-action RPM rod for football jigs offshore and a 6-foot, 6-inch medium-heavy-action RPM rod for the Cumberland Pro Caster.  He uses a high-speed  Abu Garcia Revo reel with 15-pound  Seaguar Fluorocarbon for both jig rod combos. Always fishing his jigs on the same rods enables him to know how his jig should feel. No variables change, so it always feels the same and helps him detect when something changes at the end of his line.

“I’m looking forward to hopefully having a future in fishing,” Moberly said. “It’s all I spend my money on now. If I’m not fishing, I’m really not doing anything. I’m either watching it on TV or trying to learn more anywhere I can. I feel like I’m versatile enough to compete with anyone, but it takes the time and practice on each fishery to learn it. It’s hard to drum up sponsorships as a co-angler, but I think if I could close the deal on a few partnerships, I could make the jump to the boater side. It really takes time and money.”

Moberly believes that most tournaments are won either flipping shallow or fishing out deep. So he chose to constantly work to improve his offshore fishing and fishing more of the in-between water away from the bank.

While he’s still figuring out his goals in college studies, he’s definitely got the college fishing game figured out, and it’s only a matter of time and the right connections before he’s going to be moving up the ranks on the professional fishing circuits.To find out more about Cumberland Pro Lures, visit cumberlandpro.com.
Next
Contact Us