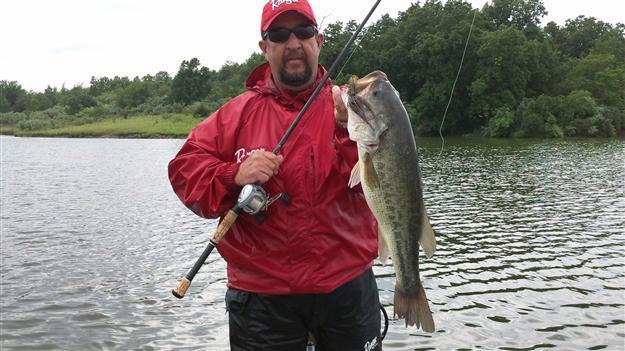 Many people tell us that they fish because of all the crazy things that they’ve seen or had happen to them on the water. The chance at a crazy memory is worth the trip a lot of times for folks. Terry and I had one of their own in July of 2010.

We were heading up to Grand Rapids the next day, so we decided to hit the lake the afternoon before our long drive. Terry knows the small lakes around Normal probably better than anyone in the state of Illinois. It wasn’t long until the bass started biting on his first spot, even an occasional sauger or two. But the size wasn’t really there.

So up the lake we headed as the rain began to fall. Then it rained hard. Then it rained the hardest. We pulled up to a deep spot offshore and started chunking big worms and jigs. It wasn’t long and Terry was battling a nice bass in the torrential downpour. Then another. And another.

Suffice it to say they were grinding on a pretty good school. But little did we know, the tide was about to shift.

Terry got a bite and set the hook hard. His line had a fray, and it broke right at the reel, sending his free line shooting into the lake. The pouring rain made it impossible to spot the line and grab it before it disappeared. I fired a cast back up to the spot and immediately got a bite. I set the hook, and it was a good one, a bass weighing more than 5 pounds. As the fish jumped, I noticed there was a line draped across the mouth of the fish. 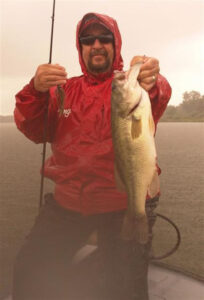 I quickly landed the fish and threw it back but held onto the other line. I pulled it in, and sure enough, there was a fish on the other end. It was Terry’s line that just broke! I hand-lined the bass but the fish got loose in the fight. I gave Terry his jig and line back and went back to fishing. Terry quickly retied and fired the jig back up there as we both laughed about the odds.

Terry set the hook again and immediately asked for help because it was obviously a big bass. The fish jumped and stripped drag, and I dropped my rod and scrambled for the net. We land the bass, weighing more than 7 pounds and high-fives ensued as we got the video camera and still camera out to shoot with the big fish.

As I do that, I heard a faint “plunk” behind me. I turned around to find my rod and reel (actually Terry’s rod and reel I borrowed) was gone.

Oh no! A KVD Quantum reel and St. Croix Legend Xtreme rod just went into the drink over 25 feet of water. I grabbed a crankbait rod quickly and Terry did the same.

I fired a cast up towards where I had just cast with the now missing rod. As Terry gets ready to launch his cast, a sizable bass jumps out of the water about 25 feet out the other side of the boat. Terry fired his crankbait toward the splash. He reeled down but he was caught up in something. About that time, he felt a fish and set the hook. He fought the bass to the boat and the crankbait was hooked on the outside of the fish’s head. However inside the fish’s mouth was my jig!

We quickly unhooked the fish and get hold of the jig and line.  I hand-lined again. There was no tension on the line, and we both feared the reel was in free spool mode. But I kept pulling and finally the line tightened up. Next thing I know, the tip of a St. Croix rod appeared and shortly thereafter a KVD Quantum reel. So in the span of ten minutes, we caught a 5 pounder and a 7 pounder, caught not one lost line with a fish, but two, lost a $700 rod and reel combo, only to catch it again moments later and ended up not losing any lures or our sanity in the process.

Now if that’s not the craziest fish story, I don’t know what is. We got a little video and photo evidence to corroborate our story, but we both know it went down exactly as described here and it’s a fishing memory neither of us will ever forget!