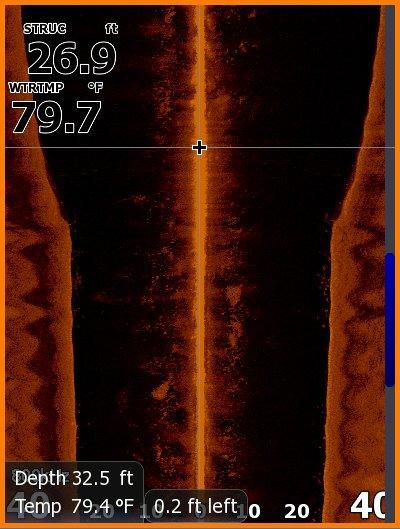 I’ve been fishing since I was old enough to hold a rod. My father would carry me to Lake Lonely in New York in a johnboat with a beat up white cowling covered Johnson. We’d putt out to his favorite cove where we’d dunk minnows for crappie or pull spinners for walleyes or big northerns or throw grape with firetail Mann’s Jelly Worms and Creme Scoundrels for bass.

I was terrified of the ride in the boat out to our fishing spot. Every bump I thought would be my last as I clinged to my orange float vest while staring at all the water in the bottom of the boat. A Maxwell House coffee can served as a makeshift bilge pump.

But I loved the routine of getting to our spot, anchoring, and then proceeding on our mission of boating fish. I knew what to expect, I knew what I had to do, I knew what Dad would do and I felt like I knew what the fish would do. Going out and getting back wasn’t the treat but what happened in between was an adventure even with the same routines on each outing. Even if I didn’t catch any fish, the pursuit was a thrill.

Some 35 years later fishing has changed a lot. A beautiful Ranger Z520 bass boat, sophisticated networked Lowrance HDS units, an Evinrude 250 that would have sank our ole’ johnboat. Now I’m much more serious about my craft and the pursuit of fish. But in the last 12 months, I’ve had a change of heart about my fishing, and the result has been that fish have been coming aboard by the net fulls for me.

So what’s different? The pressure I’ve put on myself – something to which tournament anglers can especially relate. A year ago I was very tired and stressed when I didn’t catch the fish as good as I felt I should have. The more I fish with pros, the more I realize they are still human. I think we see how good those guys catch fish and we think if we don’t catch them to that level on every trip, that we’re somehow a failure at the sport. But the fact is some days they don’t find them. Some days they find them so good they are unbeatable. But they still eat cheeseburgers, wear flip flops and take their kids to baseball games.

KVD is safe. I’m certainly not going to be taking any of his money in any future bass fishing contests. But I finally realize again that fishing is about the pursuit not the measure of how well I catch them on each trip. I like to fish buddy tournaments, short of that, I’ve changed as an angler. For the longest time, I felt like I had something to prove. That I needed a measure to see how I ranked against the great anglers I admired for years.

The fact is somewhere in there you lose sight of what fishing really should be about. It should be about finding them, not catching them. So many folks want to shortcut the process and skip the finding part and go right to the catching part. They put unnecessary pressure on themselves to produce fish every time out.

Fishing is about the process. The process of eliminating wasted water and finding productive water. Some days you may only eliminate water. Those are the frustrating days. But the more time you spend eliminating, the smaller the possibilities get and the more narrow your search becomes for the right places.

I think the pressure to produce compounds in tournaments. You think you have something found, but you shook them all off in practice only to come back in the tournament and not catch a keeper. Next thing you know, you’re contemplating selling your tackle, trading your truck in for hybrid and dropping the boat off at the dealership for a consignment clearance sale.

The reality of this sport we love so much is they don’t bite when we want them to. They bite when they want to. Now sure we can make them want to a little more at times like we talked about in our blog yesterday. But you fish enough and you’re going to catch them, and you’re going to not catch them – whether you’re a weekend local or Ultimate Match Fishing champion pro Jeff Kriet.

Your measure is not how well you caught them in this weekend’s derby, the measure is how good at you at finding fish. The pursuit of the fish is the measure of you as an angler, because what I’ve found over the last 6 months is that the better I get at finding fish, the better I get at catching fish. I’ve had more 20-pound fishing days this year already than I did in the last 2 years. It’s not like I became a great angler from reading some article. I just changed my mindset.

That’s probably come from talking to guys like Terry Bolton, Mark Menendez, Dan Morehead, Mike McClelland, Curt McGuire, Ben Parker, Craig Powers, Ike, G-Man and many more on a regular basis. When they talk I listen like a kid who’s about to discover the secret code to his favorite video game. I hinge on every word, and I try to apply their experiences to my own. They are crazy good at this game.

The common theme is that the better you are at covering water and finding fish, the better everything else gets in your fishing. Sure you’ve got to get good at triggering fish, milking an area, and more. But my mindset really changed this year on my own lake.

I’ve been practicing for a tournament for the last week. I’ve only been able to afford a few hours in the morning or afternoon a handful of days the last two weeks. But my simple goal has been to find one school every time out. I’ve picked a section of the lake and forced myself to stay in it and just look around me for what looks like it can hold fish.

Some days I don’t find any. But every time out I’m having fun and enjoying the pursuit. In about the last 15 hours of fishing, I’ve boated more than 100 bass. I’ve had a fight with a fish that certainly would have bested my 8-2 personal best bass before she was able to pull loose. I’ve had tons of little fish and I’ve had some 5-pound fish pose for pictures.

But the pursuit has been giving me more confidence. And confidence has helped the fishing. And the fishing has seemed to help relieve the stress in my life. And maybe that anxiety of the ride to where I’m going is finally getting a little easier because the pursuit of the fish has put the thrill back in my fishing life.