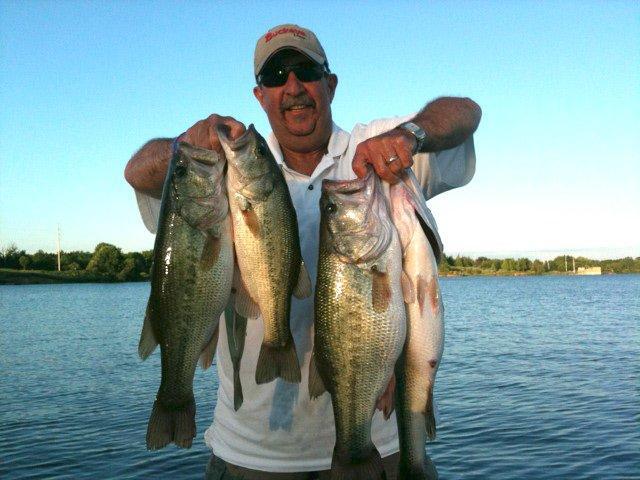 I try to get out on the water whenever possible. Like most of the Wired2Fish readers, it’s when time allows or if we have products to test. Most of the time, I get to go right after work for a few hours. I am fortunate that we have a couple of good lakes in Central Illinois not far from the office that offer a variety of different types of fishing. You can fish shallow grass, blow down wood and stumps, or creek channel ledges offer structure where deep water techniques can be employed. I like the variety.

This past week, I had the chance to sneak out on a very windy evening where I felt the variables were perfect. Full moon, water is clear, and grass is everywhere topping out in some areas. We are in the post spawn, but even though most anglers feel this is one of the toughest times of the year, I like it as big female bass have a tendency to congregate right after the spawn. If you can find where they are positioned, it can be a “Katie, bar the door” time.

I had been out a few times in recent days testing a new device from Hydrowave to see if it could really make a difference, and to be honest those days had been very tough. I would locate small schools of fish on my Humminbird side imaging, but the largest bass in those schools seemed to be about 3 pounds. Bass were mixed with white bass and saugeye, so it was fun but no school of big fish. It was all about to change!

When I got to the ramp, I noticed there were no other boats in the lot. That surprised me as my last trip the lot was full but feel the heavy west winds and threat for rain and storms may have kept others off.

Sometimes the stars just align. Even though the conditions at first glance may look unfavorable, digging deeper is the key. As I mentioned above there were several factors that held promise – the post spawn slump had to end, a mix of clouds, a strong west wind and most importantly the grass was getting right. The grass is a variable, if figured out, that can be not only a great place for small fish but can hold big cruisers resting after the spawn. I don’t pretend to know everything about it, but rest assured, it can drastically change a body of water.

A whole new set of techniques are available because of grass. Obvious ones like topwater fishing and frogging come to mind immediately. Both are special techniques, and if you don’t like catching fish on top, it’s time to offer the rod and reel in a garage sale. Bites are explosive and many times fish are bigger when it gets going.   Punching the grass with a heavy weight, heavy line and compact bait is another technique that many anglers have a tough time dissecting, but when you do, it can be awesome.

Another technique that I have gotten pretty good at is finding sparse sections of deep grass and cranking, jigging and worming it. I still have a ton to learn, but I am dialing it in better each year. This day set up perfect for this technique.

The more time I am on the water, the more I look at all the variables. Some may call it instinct but I call it “finite awareness” –  paying more attention to the little things. I look at sun position, wind and casting angles more critically than cover or bait selection. That’s something that really came into play on this trip.

I truly believe fish use the sun to position themselves. Deep ledge fish particularly use the sun. An ambush point, a resting area or feeding advantage are not far apart. When the sun is positioned high in the sky; a point, a stump or even a creek channel ledge can serve as shade or a comfort zone for big fish. Add the wind into the equation, and it allows the angler to pinpoint exactly where the bass are on a particular piece of cover. Remember, bass are Mother Nature’s creatures, cold blooded and are equipped to deal with all kinds of weather.

They seek a comfort zone and an area that provides both food and body related comforts like water temp and cover. The sun was high, air temps were around 80 degrees and water temps had dipped to around 73 degrees. This was a critical piece of the day’s equation.

The wind was around 15 mph with 20-plus mph gusts out of the west. I chose to go with the wind as I knew most anglers would seek refuge from it and I could fish areas that others would not attempt. Wind can cause bass to get aggressive, in particular in post spawn. It rings the dinner bell.

I have spoken for hours with close friend Gary Klein about casting angles. Knowing that there are good, better, and best cast angles was a key to this day. Fortunately, I found best on the first cast. My first fish was an 8 pounder. Five casts later, I had five fish that weighed right at 20 pounds.

One other thing I should mention again here: I was using the Hydrowave Sound Technology Device. I had it set on passive shad as I pulled onto “the spot”. I immediately changed the sound pattern to “Frenzy” after landing the 8 pounder. Did it make a difference? I can’t swear it did, but rest assured it will be on every time I am on the water. It was another variable and much like adding scent, if it works, I use it.

Instead of being on the deep side and crossing the shallow place on the points and jut-outs, I paralleled the drop. That cast line I believe was the difference. The sun was in the west, wind was out of the west and the ledge ran north and south. Starting to get the picture?

This particular spot has a few stumps, rock and is about 100 yards long. It is on the old creek channel, and to the best of my knowledge, it doesn’t get much pressure. Matter of fact, I had never seen anyone ever fish it. The water depth was 15 feet on top, and the fish were positioned in 19 feet. Utilizing side imaging allowed me to see the school on spot number one, dissect it and see how the school reacted.

I fished a 1-ounce jig and chunk, one of Jason Sealock’s Heavy Gator Spoons, a Zoom Ole Monster Worm, a Strike King Series 5XD and a Spro Little John DD on that spot. The bite was fast and furious for about 20 minutes and stopped. There were other bass there but rather than smoking that spot, I had the information I needed to try other spots like it. This is the part of the puzzle for which I live.

I used side imaging again to idle over a couple of other places with similar depth and a similar set up, and on each spot I culled. Not as fast and furious as the other locations, but slouches were present on each. I hit seven spots in a very short period of time and caught 22 bass weighing more than 4 pounds.

My largest five-bass limit weighed 28.8 pounds (the smallest bass in the limit weighed 4.2 pounds). I also had four sauger up to 24 inches and one musky of 40 inches all on spots I don’t spend much time fishing. Utilizing side imaging, the Hydrowave, the right baits and recognizing the variables were the difference.

After I caught the last big fish, I sat down in the boat, still shaking and said this prayer: “Lord, if I never catch another bass, it’s ok, because you gave me a day of a lifetime, thank you for allowing the fish and me to have a meeting today and allowing me to understand your creatures for a brief moment.”