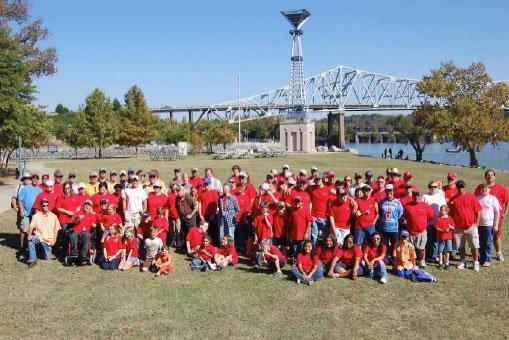 Today on the Fishing Wire, contributor Alan Clemons offers some sage advice about getting kids in the outdoors. Here is his article reprinted with permission.

FLORENCE, Ala. – Thursday night I sat in a hotel ballroom filled with college fishermen, almost all of them gussied up in their tournament jerseys and caps.

Auburn University’s bass club is hosting the Southern Collegiate Bass Fishing Series tournament on Pickwick Lake this weekend. Teams of anglers ranging from 18- to 23- or 24 years old made their way to this Tennessee River town that realizes fishing tournaments help drive the economic bus.

I talked with two anglers – one was 18, one was 19 – from Gadsden State Community College. The school is about as big as a washtub, with none of the glitz and glamour of big universities. Yet these two guys watched a college fishing tournament show on the Versus network and had the gumption to ask the college administrators to let them start a club team. The college administrators had the gumption to agree and give their blessing.

I talked with Auburn’s club advisor about why these strapping college lads would want to do this. They could be hanging out with chicks or listening to music this weekend. They could be getting ready for turkey season or watching their university’s basketball team in the conference championships.

Instead, they made their way to a riverside town for a two-day fishing tournament on a huge, famous lake. They piled into rooms at local hotels, one of which gave a great discount rate. They were flabbergasted with the Thursday night barbecue dinner and white tablecloths in the ballroom for the registration and rules meeting. Instead of boxes of pizza and cans of soda, arguably the favored breakfast-lunch-dinner of college males everywhere, they were received like the big-time pros for their meeting.

The competition is what drives them, said Auburn’s advisor, Jann Swaim. It’s not money, because in this series the winners get tackle or gift cards instead of cash. It’s about competition, about bragging rights until the next tournament and the next time the guys from Big School U. see the guys from Little School C.C. who whipped their butts a month earlier.

>It’s about a spark that began when they were younger, when their fathers or grandfathers or a neighborhood friend took them fishing. It’s from a spark that started when their mothers or grandmothers said they could slip away to the pond or creek, knowing they might find crawdads and frogs in their jeans pockets two days later doing the laundry.

Thirty years ago my father took me fishing on the Tennessee River below Wheeler Dam. It scared the hell out of me to be in the flatbottom boat holding a crack in the wall of the dam near the turbine while he dipped shad minnows so we could drift for smallmouth. It thrilled me that he would have confidence in me to hold the boat and take me fishing with him, even if I gave up after three drifts and wanted to play with the minnows.

Thirty years ago I was old enough to hang around the docks at Fisherman’s Resort, probably pestering the older black guys who cleaned fish there for a few bucks. They watched out for me while I threw rocks at the mud and tried to catch turtles. They skillfully handled a fillet knife as I watched the turtles and crawdads eat the guts they flipped into the water.

I could take you to Mr. Jones’ pond, where a sagging dock on the south end now would be the first place I’d pitch a jig. I could take you to the flat rock on the corner of Mr. Pierson’s pond where I could stand and cast down either bank and a snake stuck its head out once, scaring the bejeebers out of me. Or to his other pond where I caught the first gigantic bass of my life with my friend Trevor and then released it, only afterward remembering that Mr. Pierson said to take out the fish we caught. That big beautiful Mama Bass deserved to stick around, though.

I could take you to Mr. Quinn’s pond, which was clean and tidy and protected by an equally-tidy fence. Or to what I call Lake X, my getaway lake, small but with big fish and enough space to allow me to hear the wind instead of tires on asphalt. It’s in a pasture where I can chase grasshoppers, shoot my guns, listen to geese, walk into the woods and flip rocks in the creek for crawdads I put back instead of putting in my pocket. Where I can be a boy again.

We knew these people from church, from our daily lives, and they knew me. I knew one screw-up and a phone call to my father would end, or curtail, my privileges. They allowed a kid to enjoy the outdoors and assume some responsibility, which was appreciated then and is much, much more greatly appreciated now with the gray on my head and a tear in my eye.

Access can be hard to attain. Too many people are afraid of liability, of some mollycoddler suing because Little Johnny got hurt. Too many parents are afraid to let their kids be kids, and buy them video games instead of shoving them out the door for the day. Too many adults simply refuse access instead of welcoming them with a few conditions and trust.

I thought about all that while surveying a room of college-age men with fire in their bellies. Somewhere along the way, someone said, “Sure, come fishing anytime. Just let me know and close the gate behind you.”

If you have the chance, tell a kid or his dad “Yes” this year. Don’t snuff the spark.