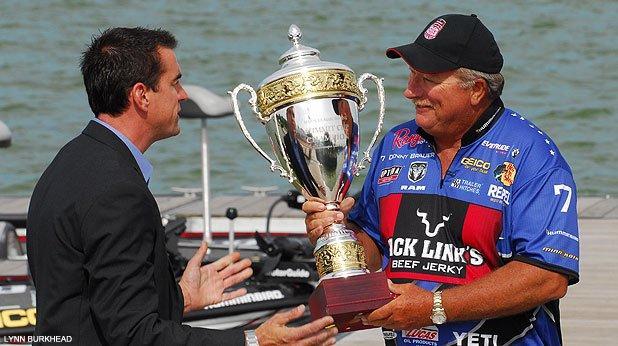 Anger management courses withstanding, most common folks don’t deal well with pressure, myself included. Most folks manifest their own pressure causing an unnecessary amount of stress, even in activities as simple as fishing. Fishing pressure no doubt affects how we fish and more importantly whether we catch or not.

We’ve got 5 tips to help you remove the fishing pressure. This is largely from analyzing the recent fishing trends of two very different professional anglers in Denny Brauer and Michael Murphy.

Brauer has had one of the greatest tournament fishing careers in professional fishing. He fished in 317 Bassmaster events and finished in the money in 2/3 of those events, winning 17. He managed, however, just one win in the last 7 years of his Bassmaster career. As a highly successful legend in fishing, there is an added pressure to be a top finisher in every event.

Last fall he announced his retirement from the Bassmaster Elite Series. He was still going to fish some tournaments for “fun” and work with his sponsors, but the pressure of the grind of regular competition had gotten to him.

Next thing you know, he’s having fun, fishing the way he liked to fish and low and behold, he wins not only his first event after retiring, the Major League Summit Cup on Chautauqua Lake, but he turns around and wins his next tournament on Toledo Bend. He kept it simple and flipped docks in both events – something he loves to do.

Michael Murphy fished five seasons on the FLW Tour, three of them as a National Guard Team pro. Arguably the worst seasons of his fishing career were as the National Guard pro.

“I felt so stressed because I was dealing with the naysayers saying that I didn’t deserve a team deal,” Murphy said. “I put pressure on myself to go out and produce for my sponsors. I had newborns in my family, and then I had a boating accident that ripped my shoulder apart. ”

All that added up to too much internal pressure to fish effectively. But losing his team deal and hurting his shoulder turned out to be the “most rewarding blessings in his career.”

After the team deal dissolved he was able to work with companies like Navionics, Ima, Optimum Baits and others outside of the fishing tournaments to keep his career going. He had a bad boating accident that required total reconstruction of one of his shoulders. That limitation forced him to go back and make fishing very simple because he could basically only roll cast.

Since then he has qualified for the All-American in his first season fishing the South Carolina BFLs, won local CBC team tournaments and $10,000 checks, done well in the Bassmaster Opens and completely revamped his fishing by using simple techniques and not being afraid to try something that might not sound like the best way to catch fish on a certain fishery. The whole thing came down to removing the pressure and making fishing simple and fun again.

How to remove internal fishing pressure

Murphy offered some good tips on how to remove internal fishing pressure, including the following:

When we’re fishing we get these instincts that tell us to try this or check this. A lot of the time when you’re pressuring yourself to do well, you won’t listen to your gut. It never hurts to try something else for 5-minutes, or go check a certain spot or type of area for a few minutes just to see if a “hunch” is right. Sometimes those hunches are differences between catching and not catching. If it doesn’t pan out after 5-10 minutes you can always go back to what you were doing.

Fishing should be fun

Whether you’re out with a buddy, or fishing for $10,000, you should enjoy fishing and the pursuit of bass or crappie or whatever fish you’re after. If you’re not having fun actually fishing, then you’ve got to make an attitude adjustment or go find something else that is fun. Some days you won’t catch them. And that’s okay. It happens to all anglers. Just feel like you’re getting better each time, and you’ll have more fun.

If you keep fishing fun, you’ll fish better. But some anglers focus too much on catching big limits or placing high in a tournament.   In the age of social media, it seems fishing has become more of a bragging platform for anglers and that causes them to put undue pressure on themselves to always catch big ones. Murphy suggests focusing on getting better every trip. Get better at your presentations, your mechanics, your decision making, etc. It’s a process that will take the stress off that comes from not catching them.

A huge influence on Murphy and his fishing has been Bill McGuire, a competitive trap shooter who has coached him on how to deal with pressure in competition. McGuire told Murphy he was trying too hard to please everyone and prove himself. All he had to do was just focus on the mistakes and fix those. Then just have fun and fish loose. And the improvements will come.

Avoid the highs and lows

The biggest pitfall Murphy saw in himself and in new anglers fishing tournaments is their mental swings. They overemphasize doing well and are crushed when they bomb. Anglers psyche themselves up by saying they are going to win every tournament or catch huge limits. Then they are crushed when they don’t catch fish because they were operating on such high preconceived notions.

You’ve got to learn to just fish your gut feeling and not force anything. And be okay with missing the fish sometimes. Add the fun back in your fishing, don’t be afraid to try different stuff and fish loose. Don’t get crushed when you don’t catch them. Everyone goes through the same thing at some point in fishing. The fish are changing all the time and you’ve got to just have fun and try to learn as much as possible on every trip.