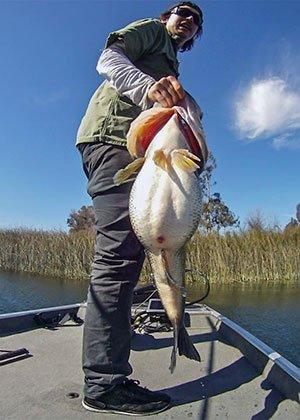 If you haven’t been under a rock, you’ve probably heard about a bunch of big bass from a bunch of different fisheries being caught right now. This isn’t anything new. It’s the folks that target early prespawn bass. Every year about the end of February to the first of May there seems to be a huge influx of giant bass and near record or record-breaking catches. The common denominator often presents as nothing more than the first wave of big females make themselves more susceptible to being caught by feeding and moving into more targeted zones.

This migration often has nothing to do with temperatures. It can have as much to do with length of days, sun, wind direction and sometimes even something simple like a warm rain causing warmer shallows.

This past month we’ve seen a new lake record on Grand Lake, a big 17 1/2-pound monster largemouth out of San Diego from Mike Gilbert, William Davis catching an 11 pounder on Pickwick on one day, only to go back out and catch the same 11-pounder the next day in a tournament. Tim Creighton busted a 12.14-pound largemouth on Guntersville just before the Everstart Series caught a bunch of ridiculous 25-pound plus limits. FLW Tour pro Andy Morgan fun fishing with Frank Flack on Chickamauga boated five that weighed 39.81 with two bass weighing more than 9 pounds. Throw in a 70-pound record striper from Alabama, and if that doesn’t convince one of the power of fishing the early prespawn period, nothing will.

Don’t wait for the best weather. Many days when it’s raining and snowing and cold, the fishing is actually better because of lower pressure. The cloudy cold days can be better than the sunny warm ones. But here are 7 reasons to get out there and fish before it gets really pleasant if you need convincing.

It’s long been known that big bass often bite on ugly days. The big fish probably develop a comfort level and recognize the lack of predators (namely us) on those wicked days of late winter and early spring. Big bass, generally speaking, seem to move up and feed first.

If you do get a patterned dialed in, which often can be easier than you think if you hit your favorite lake earlier than the masses, there is great opportunity to catch some awesome weight. Anglers have been posting pictures on Facebook lately of bundled up folks holding four and five bass weighing more than 20 pounds.

I’ve had some fun days where I felt like I owned the whole lake in the last month or two. No trucks at the ramp. No boats in my favorite creek. And the bass bit often and were a lot bigger than expected. I love getting out there before the crowds. There is a lot of reward to it.

What are we really talking about here? The bass don’t just magically appear in the prespawn. They were in the lake all winter, they just slid out deeper, a little harder to reach, feeding a lot less frequently. Now they are sliding up shallower and eating daily, fattening up their bellies for the stress of the impending spawn. That puts a lot more big bass within your reach than have been the last few months.

They are eating daily, and even though the water is cold, they don’t mind chasing. That means they will react, trigger and attack. You’ll have a lot more opportunities to set the hook when bass are in these windows of feeding, and the early prespawn can be one of those best times. Sure they feed more in much warmer water, but again we’re talking about concentrations of big bass this time of year. Not to mention they don’t seem as smart as they seem to get later in the year.

Bass in the prespawn seem susceptible to a lot of different presentations and lures. You can put down the umbrella rigs for good and pick up a crankbait, jerkbait, jig or maybe a single swimbait. The fish are cooperative and borderline dumb at times to these all-too-common presentations frequently thrown in the warmer months.

If you’re newly hooked on bass fishing, and catching a big one is what thrills you, then this is the time you need to be fishing. I’ve been at this for 30 years now, and I still get thrilled every time I set the hook and feel a head shake under the water. I will layer up and put on heavy rain gear and get out there. You might not catch the numbers you catch in warmer months, but eventually you’ll hit that day where the number of quality bass will astound you.

To me, the early prespawn is worth a few miserable days of cold, wind and rain along with frozen fingers and runny noses for the chance to have one of those magic bass fishing days.