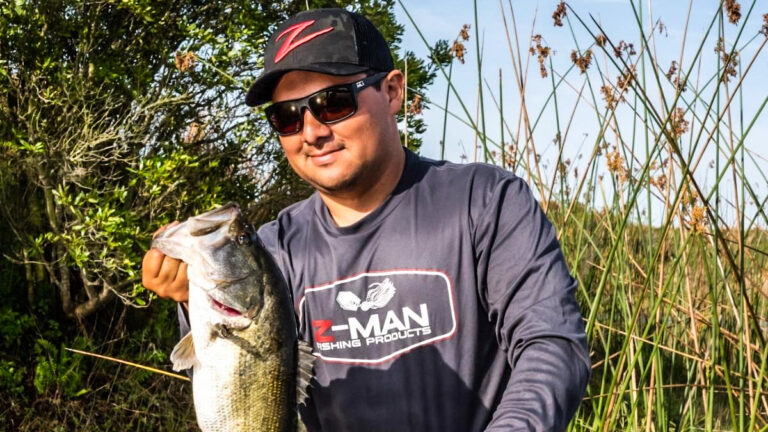 For fishing industry veteran Jose Chavez, the business of angling has always distilled down to a simple yet meaningful mantra: “I’m a big fan of the everyday angler and the lifestyle,” believes Chavez. “For me, it’s about putting the types of lures in people’s hands that produce amazing, unforgettable on-the-water experiences.”

Recently, the talented angler and innovative lure designer joined forces with Z-Man Fishing, assuming a new role as Director of Product Development. Chavez immediately enriches the Z-Man culture with an impressive array of experience and knowledge in lure design, having worked with some of the top brands in sportfishing since 2014.

“When I met Jose while fishing in Louisiana 7 or 8 years back, I was immediately impressed by his positive energy and his passion for fishing and the fishing industry itself,” said Daniel Nussbaum, president of Z-Man Fishing. “Since then, it’s been cool to watch his career arc and talents as a product designer really blossom.

“We’ve already had some invaluable conversations with Jose about the next phase for Z-Man lures, particularly our ElaZtech® softbaits. I think fans of Z-Man—and anglers in general—will soon be benefitting from Jose’s creativity and passion and his exciting new addition to our company.”

A native of the small coastal town of Morales, Guatemala, Chavez fondly recollects his earliest memories on the water— life-changing days on the Rio Dulce, where he fished from the riverside general store dock owned by his grandfather, not far from the Atlantic Ocean. “Far back as I can remember, I was down at that dock, hand-lining mojarras with my grandfather,” he recalls.

“By the time I was 8 or 9, my uncle was taking me on his big annual trip to fish the barrier reef near Belize. We’d spend at least a week tent-camping on the outer barrier islands, fishing dawn to dusk. Those were the adventures that fostered my lifelong love for angling.”

Later, while pursuing a degree in microbiology at the University of South Florida, Chavez discovered the allure of kayak fishing. “Still recall the day I had to wade a half-mile to reach a school of tailing redfish. Watched a kayaker zip right by me and connect with four reds before I even approached them. At that moment, I knew I needed to get into a kayak,” he laughs.

Chavez’ passion drove him to excel on the competitive kayak circuit, eventually finishing fourth at the Hobie Worlds Tournament in Australia—the top performance among all international competitors. He converted to fishing full time with artificial lures only, committing himself to learn everything possible about lure mechanics, performance and design. While competing on the kayak tour, Chavez also became a regular contributor to Kayak Angler Magazine, and later, wrote articles and contributed photography for Florida Sportsman and Florida Sportfishing magazines.

While pursuing a career as a microbiologist, traveling 6 months per year, Chavez and his wife welcomed their first child. “I knew I needed to make a change to spend more time at home,” he admits. “I saw a big opportunity for smaller companies in the fishing industry to utilize social media and gain access to their customer base in unprecedented ways.”

On a whim, Chavez attended the annual 2014 ICAST show and connected with the staff at 13Fishing, for which he would soon assume the role of marketing manager. In ensuing years, Chavez helped transform brand identities for 13Fishing and Savage Gear, creating numerous groundbreaking fishing lures and winning several “Best of” category awards at the annual ICAST show.

All the while, Chavez casually noted the success and distinctive nature of Z-Man lures. “I’ve long been impressed by Z-Man’s remarkable ElaZtech material,” he adds. “For both casual and competitive anglers, the dynamic and durable properties of ElaZtech help us stay focused on fishing and catching fish, rather than spending time rigging another lure. That’s huge.”

Chavez further avows his affinity for the Z-Man brand and its culture. “From an outside perspective, before even joining the team, I’d have to say I viewed Z-Man in a unique light. A lot of us believed Z-Man had the best reputation in fishing. Still does. That speaks to both the pioneering products and the people, all of whom understand fishing, the angler and the passion that drives the consumer.

“Naturally, I’m excited to get right in there and start contributing fresh ideas and concepts, and ultimately, to elevate the Z-Man angler experience to even greater heights of awesome.”

Nussbaum encapsulates the new collaboration: “We’ve developed some incredible baits over the last few years here at Z-Man. But by working with someone as creative, detail-oriented, knowledgeable, and well-connected as Jose, we’re about to take things to a whole new level.”