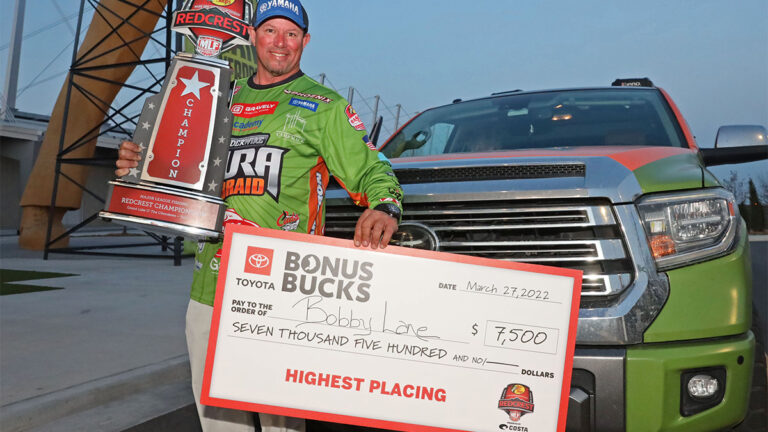 Bobby Lane says two of the best post-victory experiences following his REDCREST win on March 27th have been his youngest daughter Amberly asking to have her picture taken with the trophy nearly every day, and a surprise party his wife Madeline hosted in his honor at a local Beef ‘O’ Brady’s sports bar so all their friends who weren’t in Tulsa could share in the celebration.

“I can still remember the very first Toyota Bonus Bucks check I won. It was from an Elite Series event on Smith Mountain Lake about a dozen years ago. I finished around 20th place, and still won a Bonus Bucks check. I told my wife how awesome it was that I didn’t have to win the tournament to win the Bonus Bucks,” says Lane.

“We’ve now bought four more Toyotas, and have been huge believers in the Bonus Bucks program since that first check hit our mailbox back in 2010,” adds Lane.

And if you ask Lane what’s kept him loyal to Toyota beyond the Bonus Bucks program, you’ll receive a response dipped in the same straight-forward common sense he applies to all facets of life.

“It’s simple. In 12 years of towing with a Toyota, the only thing I ever have to worry about is changing the oil and buying new tires. No other truck offers you that kind of reliability, plus it tows my Phoenix like a beast, and pays you Bonus Bucks too. I mean seriously, why in the world would you tow with another brand of truck if you fish tournaments?” challenges Lane.

“I’ll tell you this much, my current Tundra is a 2018 with 130,000 miles on it, and I’m already talking to my buddy Travis at Scott Clark Toyota about getting my hands on an all new 2022 Tundra,” grinned Lane in conclusion.

To learn more about Toyota Bonus Bucks, and to register for the program, please visit https://www.toyotatrucksbonusbucks.com/.