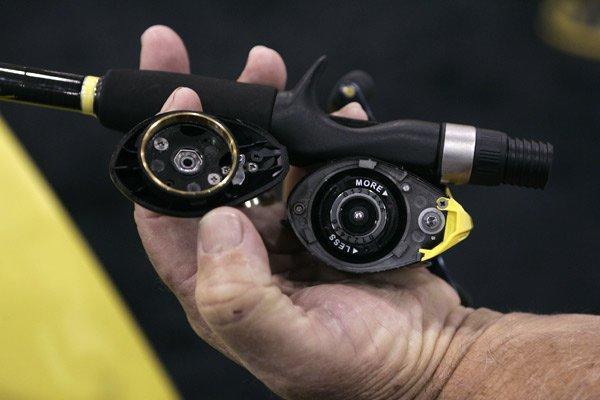 The proof is always in the pudding here at Wired2Fish. We get to see, touch, feel and test new products before most of the real world. For something to make its mark with us, it has to stand up to what we put it through. We hardly ever use the word â€œrevolutionaryâ€ because products seldom are, and the products we recommend must be something we stick our reputations on. If we say itâ€™s something worth owning it means we have thoroughly tested it and based on those tests we feel that Wired2Fish readers would be happy with it. We wonâ€™t recommend something unless we believe in it. Take that to the bank.

We hear the hype; we get all of the marketing and sales info. But the rubber doesnâ€™t meet the road until it works as designed. For us to recommend you spend your hard earned money on it, it must be good.

At this yearâ€™s ICAST show in Vegas, one of the biggest announcements was that Skeet Reese via Wright & McGill would have a whole new line-up of reels that not only had all the characteristics of the high dollar models but would come  priced  around $100. Seemed like almost too much to ask, and of course, we were very skeptical that it would perform. Knowing that Skeet is a stickler for details gave us added confidence, but we had to use the reels and see for ourselves.

We recently got our hands on the new  Victory 62R (Right handed) and have been using it for a couple of weeks. Initially, the weight (7.76 ounces) and low profile caught our eye but would it cast and perform? That was true test.

Most premier reels are gauged by smoothness and typically more ball bearings means it will cast further and be smoother on the retrieve. The Victory has 10 stainless steel ball bearings (9 plus 1) and is very smooth operationally. Even with factory settings, out of the box, the reel spins freely and is super quiet.

Another deciding factor is always weight. The all aluminum frame not only makes it light but aluminum is a tried and true frame technology that is durable as well. A nice add-on feature of the Victory is each reel comes with a neoprene reel cover, handy for storing in the rod box or on the deck.

The 6.2:1 gear ratio is suited for most techniques, and the oversized handle with slick and enlarged paddles gives the feeling of power on the retrieve. An unlimited anti-reverse combined with a Teflon drag systems, brass gears, and centrifugal anti backlash system gives the Victory added features usually found only on high-dollar reels.

When taking the reel out of the box for the first time, one of our regular exercises is to go through the manual. One problem —  there is no manual. There is a parts list schematic is included which is handy but without the manual it is impossible to know what the brake factory settings are or how to adjust them. Advanced anglers would have no problem with knowing this but beginning anglers may not. We have suggested to Wright and McGill that a small instruction manual should be included.

Experience, however, tells us that they do need to be adjusted, and itâ€™s a simple process with the Victory 62R. The side plate on the Victory has a recessed button that when pressed allows the side plate to be removed. A numbered brake wheel with tension settings is easily adjusted. We really liked this set up as itâ€™s simple and precise. Small adjustments can be made on the water but adjusting both the tension control knob, just under the reel handle and the brake control. The spool sets in place during the setting process and is machined well without slop or play.

Once the brakes and spool tension are set for the bait you choose to throw, the reel is ready to go. We fished a 3/4-ounce football head, and the reel performed flawlessly without backlashes. We were particularly impressed with the smoothness of the cast, and it pitched equally well. Pitches of up to 40 feet did so smoothly and without issue.

We hooked fish up to 5 pounds on super long casts, and the reelâ€™s larger handle gave us the power we were needed for this technique. The larger handle is an advantage on this reel. The paddles are textured, which allowed for good gripping and free spinning when winding. The paddles have small bearings inside the paddles. In our opinion, these bearings are also added pluses and increase the durability and performance of the reel.

The star drag is smooth and doesnâ€™t bind, even cranked all the way down, and the drag worked perfectly when needed.

We recommend the Skeet Reese Victory reel and feel the Wired2Fish readers will like both the performance of the reel and price point. This is a high quality reel at a very affordable price. The bottom line is simple â€“ Skeet Reese doesnâ€™t do anything second rate, and his new Wright and McGill Victory baitcasting reel is no exception.

To read more about this reel, visit wrightmcgill.com.

To purchase the reels, visit tacklewarehouse.com.