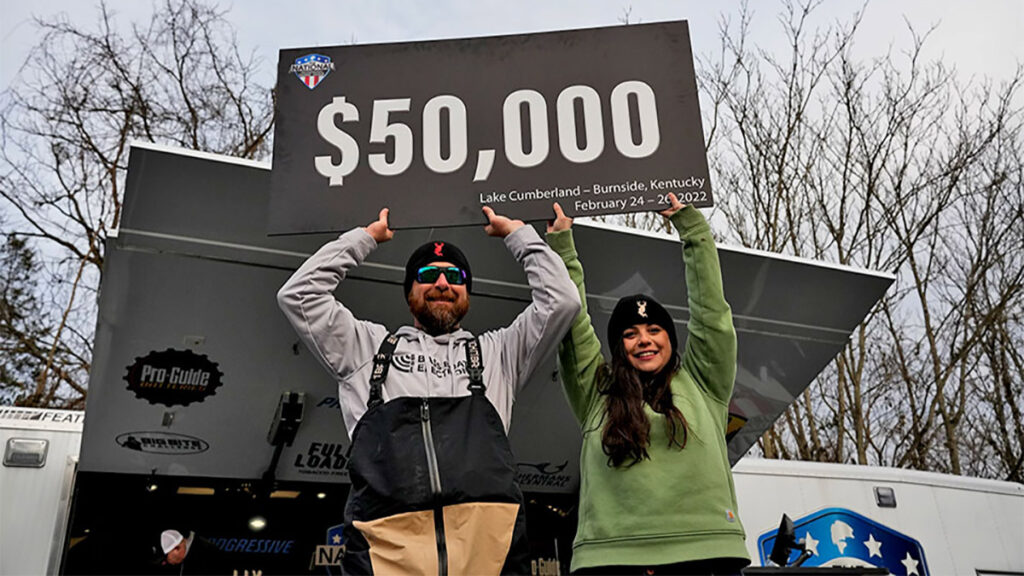 Relying on a clean water intake from practice, Taylor Watkins locked up his second NPFL win on an ever-changing Lake Cumberland with a giant 23-pound, 6-ounce bag of bass. With only one area from practice to return to, the Clinton Tennessee anglers probed a 200-yard stretch in the back of a pocket to take the $50,000 check and his 2nd NPFL Crown.

“I was definitely not catching in practice, but I did get four bites total in practice with three coming off one small stretch. With the changing conditions and rising water, I went back through there and buckled down for the day.”

Moving through what turned out to be the key stretch, Watkins broke off a big fish early on before working to the back of the pocket and filling out a limit. While letting the spot rest after the lost fish, he returned to the waterfall area which pushed clean, warm water though.

“In that little spot, there was a small subtle point on a small shelf off the bluff wall and it dropped to 25-foot off the edge. The water was 52 to 53-degrees there and was cleaner than the rest. I got back there, and first cast caught that big smallie and three casts later got another one over four.”

Knowing he had found the key to catching 18” sized smallies, Watkins picked apart his area with a ¾-ounce Covert spinnerbait with a red #6 thumper blade paired with a Zoom Split Tail trailer bait. Watching his Active Target installed by Bass Boat Electronics, he was able to make a precise cast to his subtle point and get above average size bass in the boat.

“It is relaxing to get this win; it certainly takes the pressure off for the whole year. I am not necessarily going to change up anything, but it does take the pressure off. I am not going to pre-practice on Hartwell, I’ll just show up and fish the conditions.”

With 15-pounds, 2-ounces, Josh McDermott relied on a few bites in practice to finish in 2nd place. The Fishers, Indiana angler returned to his primary bluff point leading into a creek and plucked off bass hanging on rock and wood. Using a Megabass 110+ Jr., McDermott noticed spotted bass in practice puking up 1 to 2-inch shad and downsized his presentation to catch the stingy bass.

“I located a lot of bass in practice but most of my bites were spots. Today, spots turned into largies, and largemouth turn into smallmouth. I think I had three largemouth in my bag to go with a spot and a smallie. The area I found was a bluff that dropped off into 30+ foot of water but there was a nice shelf. In practice they were in 10 to 14-foot and they moved into that same range with the rising water.”

Making a long cast on light line, McDermott would work his jerkbait to the magical depth and turn to small twitches to entice bites. He was using an Elite Rod, 6’ 10” medium action to get off to a fast start and swapped to a rock crawler to cull with his biggest largemouth. The Indiana pro milked two areas the entire day and picked through short fish to catch his bag.

After a 2-pound penalty for a culling error, Oklahoma’s Jeff Dobson weighed in 13-pounds, 4-ounces to finish the one-day shootout in 3rd place. Rolling with a solid finish to the 2021 season, Dobson is thrilled to keep the good decisions going into 2022.

“I was really comfortable with my deal, and when you fish under these conditions, you have to keep your head up and fish hard or you’re not going to be yourself. I have some history here from the past, and I found some fish in those older spots this week.”

Seen on Live fishing a micro jig, Dobson relied on an Omega Custom Tackle Jig head with a hand tied skirt he makes specifically for cold water. After going back to the locations from practice, Dobson went to an area he had got seven bites and backed off on.

“I caught those bass in the same spot they were the other day. Today, with the high water, they were in 22-foot, and it was a mix of spots and smallmouth. Largemouth are more subject to move with the water, and I caught a few of those this morning before getting back out to the smallmouth.”

Dobson was targeting boulders and standing timber and used his sensitive FX Rod, 7’ 3” Medium Heavy fast to pick up on light bites from deep fish. The key was contacting cover and moving the bait through while picking up on a subtle bite.

In the 4th place spot, just 2 ounces back from Dobson, Todd Goade relied on some fish located early on the first day of practice to catch his 13-pounds, 2-ounces. Getting off to an early start, Goade had a limit by 9:30AM and stuck with his starting spot until 11AM before making a move.

“The water in this area was 50-degrees and I know from fishing in Tennessee, when the water level rises, fish will usually stay put, or follow the water up and hang in the same depth range. I caught some fish right up shallow and some exactly where they were on Sunday.”

Fishing a chartreuse pulse jig, a crankbait, and a ½-ounce Fitzgerald Bryan Thrift Tungsten jig, Goade targeted banks with 45-degree slopes versus the steeper bluff banks adjacent. Anywhere there was a little wood and boulders, the White Pine, Tennessee angler was able to get bites.

“It was something about this little 500-yard stretch, it has wood and rock, and the one key was these red color rocks that were mixed in. Where that transitioned to shale, I got a lot of bites. I think the warmer water kept those fish there, and in practice there was also a ton of bait I could see on active target. I caught one fish out deeper on active target today and it was a keeper smallmouth.”

In the 5th spot, fishing out of Burnside this morning, Jesse Wise dodged big floating log jams and was able to get to his fish after idling and weaving through timber. Weeding through over 20 bass, Wise brought 12-pounds, 6-ounces to the scales to finish his day.

“I left Burnside and ran into some jams. I could barely get into this creek but when I got in, I fished a 400-yard stretch all day, and there were smaller key areas on that. I caught a ton of fish today, culled four times so nine total keepers.”

Tossing a ¾-ounce spinnerbait with a #6 thumper blade, Wise added a Deep Creek Lures Swimmer with a chartreuse died tail as a trailer. Rotating between the spinnerbait, a jig and a beaver style bait, the spinnerbait was the dominate presentation for the Erwin, North Carolina angler.

“I tried other baits and I could feel the fish swirling on my baits, but they never did east those jigs. I picked up that blade and locked in in my hands all day and forced a reaction bite. Its indescribable how it feels to get off to a good start and I like this league because like me, a lot of these guys are going home this weekend and working on Monday. The other key is that back home, we don’t get shy around the muddy water – I am not afraid of it and today I settled in and grinded it out.”