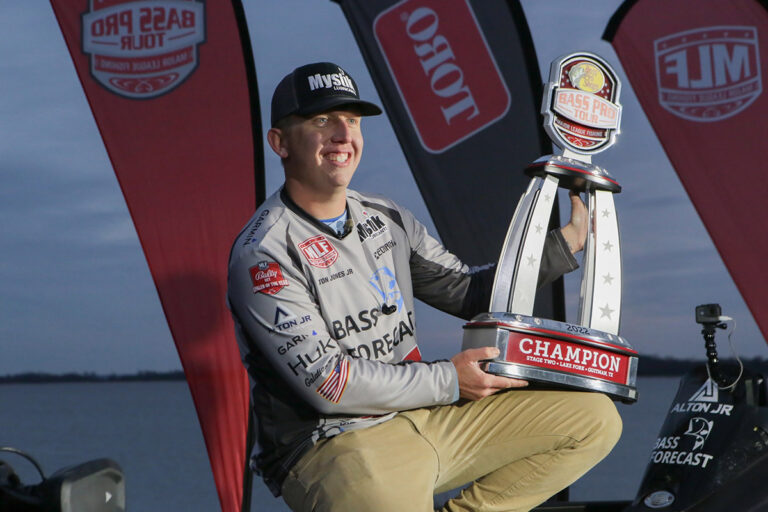 Going into the third and final period of competition Friday, Jones held a 9-pound, 7-ounce lead over fellow Texan Dakota Ebare. However, 10 minutes into the period, Ebare had boated a 4-13 and a 6-8 to seize the lead from Jones with just 50 minutes left in the competition. Five minutes later, Jones managed to catch a 2½-pounder and took the lead back from Ebare by a scant 10 ounces. Neither was able to catch a fish in the final 45 minutes, and although Academy Sports + Outdoors pro Jacob Wheeler made it interesting at the end to get within six pounds, Jones’ 13 bass for 46-2 earned him the win by a narrow 10-ounce margin.

I’m so excited – I really didn’t see this coming,” an emotional Jones said at his Bass Pro Tour Trophy Presentation. “If you’d asked me halfway through our first day if I’d have a shot to win this thing, I would have said absolutely not. Somehow, someway, by the grace of God, it just kind of came together this week. They say when it’s your time, it’s your time and I guess it’s just my time.

There are so many great anglers here,” Jones continued. “We’ve got a lot of really great anglers that have fished for a very long time and never won one. You see it all the time. I don’t even feel like I’m that good of an angler. I don’t know why it was me, but I just feel so blessed, so fortunate, so lucky and just thankful.”

Jones hunkered down on Championship Friday in the same drain in Little Caney Creek where he started the event on Day 1. It was an area that he had high hopes for, but it took awhile for it to develop.

“I fished the entire first period (of Day 1) in this drain and didn’t get a bite for an hour,” Jones said. “I didn’t come back here until the Knockout Round, but I came in here that day and the magic happened. I was able to get pretty dialed on what the fish wanted.”

What the fish wanted was a red square bill crankbait.

“I have to give a huge shoutout to Jordan Lee,” Jones said. “I got onto a crankbait bite in practice, then the second day of the tournament I got onto a squarebill bite, however, none of the squarebills I had were running deep enough. I called Jordan that evening and asked if he had any extra squarebills that ran 5 to 6 feet, and he literally opened his tackle box and said take whatever you want. That helped me out so much – I caught every one of those fish on that bait.”

The top 10 pros at the Toro Stage Two on Lake Fork Presented by Grundéns finished:

Overall there were 69 scorable bass weighing 284 pounds even caught by the final 10 pros Friday. The catch included one 7-pounder and three 8-pounders.