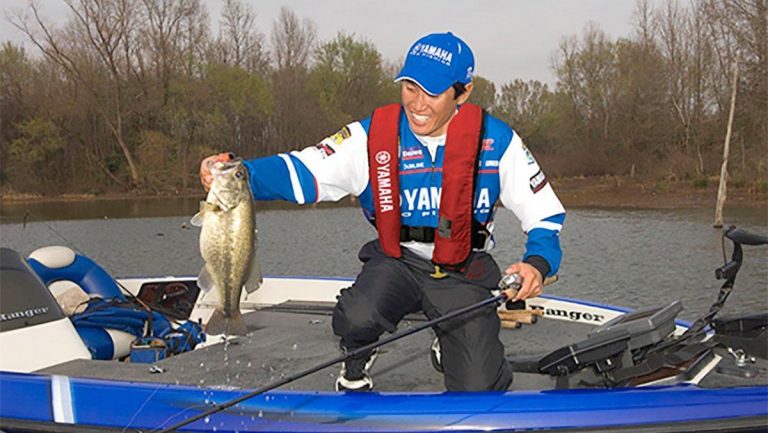 Takahiro Omori’s recent Bassmaster Elite Series victory on Alabama’s Wheeler Lake underscores just how important it is for a fisherman to be observant of both bass and baitfish activity going on around him.

After seeing a bass chase a shad to the surface right in front of him, the Yamaha pro changed lures, caught the bass and went on to win with a total of 81 pounds, 6 ounces.

“Up until that moment, the fishing had been very tough,” said Omori, winner of the 2004 Bassmaster Classic. “I had not been on Wheeler Lake for five years and during that time, much of the vegetation in the lake had disappeared. Most of the competitors, including myself, felt the tournament would be won up-river below the Guntersville dam or much further down the lake in deeper water.

“I tried fishing down the lake, however, and didn’t have any success, so I came back up to the area known as the Decatur Flats even though it didn’t have any of the hydrilla and milfoil that had made it famous. It was simply the history that made me fish there. Like most of the other pros, I really had not figured out what the bass were really doing.”

The Decatur Flats, located not far from the launch ramp in the city of Decatur, is a vast, shallow flat that contains numerous mussel shell beds where in past years bass could be found feeding as well as spawning. Without the vegetation, however, the fish appeared to have abandoned the area. Omori had fished the flat previously and during the official practice period finally had two strikes there so that’s where he decided to start when the tournament began. 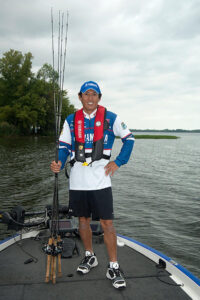 “I fished for two hours without a bite and ran down the lake and managed to catch five small fish on a crankbait and a Carolina rig, but I only had about 10 pounds and I was in 72nd place,” Omori said. “The next day I went back to the Decatur Flats, even though I hadn’t caught a fish there the first day. That’s when I saw a bass chasing a shad come to the surface right in front of me. It was the first actual fish activity I had seen.

“I’d been throwing a small crankbait and also a Carolina rig, but when I saw the bass come to the surface, I changed to a topwater lure and in a couple of casts I caught a bass that weighed about five pounds. I caught two more that brought my weight to about 15 pounds, then moved to another spot on the flats and added two more four-pounders. I had over 22 pounds by 10 a.m., then spent the remainder of the day trying to find other places just like them.”

Omori had located three shell beds where the bass were feeding on shad for a brief time early in the morning. He was fishing less than five feet deep, but never saw the actual shell beds, which were smaller than the size of a bass boat.

“Catching those bass with the topwater lure also made me think I might catch larger bass with a swimbait,” Omori said. “So I changed lures again on the third day and caught all my fish by 8 a.m. (22-9). I was only getting a few bites, but they were all from big bass. These were either pre-spawn fish coming in to spawn, or post-spawn fish leaving, but they were feeding very actively for a short time.”

Even with his two consecutive 22 pound-plus catches, Omori still found himself more than four pounds behind the leader, but on the final morning, he had more than 20 pounds in the livewell by 8 a.m., and added a final big bass at 9:30, giving him 25-3 for the day (the heaviest catch of the tournament) and a total of 81-6.

“Looking back now, I can say I was very fortunate I saw that bass chase the shad to the surface right in front of me,” said the Yamaha Pro. “Because it showed me exactly what the fish were doing and told me how to catch them. Until that time, I had not seen any other surface feeding activity and I didn’t see anymore after it, either.”