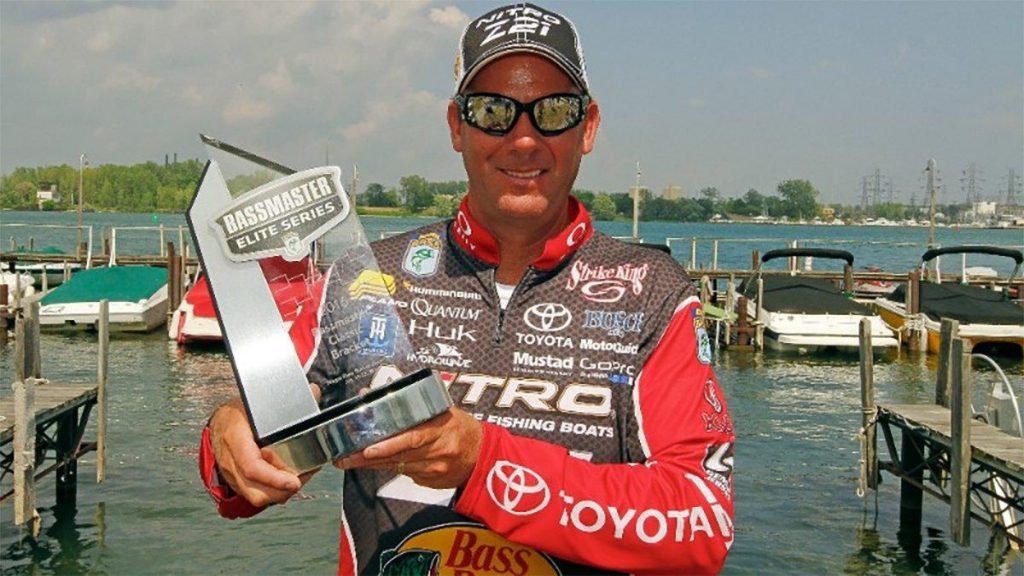 In today’s championship match, VanDam was pitted against Brett Hite of Arizona, and fans were able to watch live on Bassmaster.com as the two Elite Series anglers clashed rods for a berth in the 2017 GEICO Bassmaster Classic presented by GoPro and a $10,000 first-place payday. Unlike the first two elimination brackets of this derby — and traditional Elite Series tournaments — where a five-fish limit was the goal, every legal-size bass caught today was weighed and counted.

VanDam, who was worried about the change in format after it was announced Thursday, had no issues locating and catching enough fish to eliminate Hite, as he landed 11 bass that weighed-in at 20 pounds, 3 ounces.

“I hit a whole lot of spots looking for keepers, but really the key to my weight today was a spot where I caught my biggest fish (Thursday),” VanDam said. His key area was a flat littered with grass and rock that slowly dropped from 5 to 10 feet deep. And there was plenty of current. “Fish spawn here a lot later than people think, and I was sight-casting to a lot of smallmouth.”

VanDam swapped between three Strike King baits, including a tube, drop shot and jerkbait. “The drop shot was key on the sight-fish, but being able to cover water with the jerkbait in this crazy Niagara River current was important in connecting with fish.”

Hite committed to fishing a bridge on the northernmost boundary of competition waters, where he easily eliminated his first two opponents.

“I identified three pilings in the center of the bridge that were holding nice schools of bass,” he explained. “The water was 10 to 18 feet deep and I drop shotted with a Yamamoto Shad Shape worm the whole time.”

Unfortunately for Hite, those bass had lockjaw during the championship match. “It was really overcast today, and I think I needed sun to position those fish where I could catch them,” he said. “Plus, we had a strong cross-current wind that could have messed ‘em up.”

He caught a little more than 7 pounds on the bridge during the first five hours of competition.

“I ditched the bridge pattern with an hour left in the match and caught two keepers quickly,” Hite said. “And I was fighting a third keeper as the buzzer went off. I made a big mistake by not leaving that bridge earlier.” Hite ended with seven bass weighing 13-9.

Although VanDam seemed to cruise to victory, there was some controversy. VanDam boated a 1-13 keeper bass after fishing in an area B.A.S.S. officials.

“I made a ruling at that time that the 1-13 was caught in an off-limits area and that the fish did not count. Kevin agreed and moved and fished the rest of the day,” said B.A.S.S. Tournament Director Trip Weldon, who happened to be official assigned to VanDam’s boat during the championship round. Hite was notified of the rules violation and was given the opportunity to fish under protest, which he did. Once the competition day was over, Weldon met with the anglers and other tournament officials to make the final decision.

Weldon stated, “Bassmaster Elite Series Rules state in section C1: The following rules shall apply to all Bassmaster Elite and Bassmaster Classic events except that (i) rules for special tournaments may differ from those contained herein. Rule C1 goes on to state under the penalties for rules violations: (b) Loss of one or more fish caught in potential violation of rules or regulations. All bass under question must be marked and verified by your marshal/camera operator. If not verified, the entire catch may be disqualified.”

Weldon was the marshal, the fish was weighed, the boundary checked, and the fish was disqualified according to the rules stated above. Because this was a catch-weigh-release tournament, and because Weldon witnessed the catch and verified the weight, there was no confusion as to which fish was to be disqualified.

“I am completely fine with the ruling,” Hite said. “I didn’t protest because I had anything against Kevin, I just wanted a clarification of the rules. Kevin fished a great tournament.”