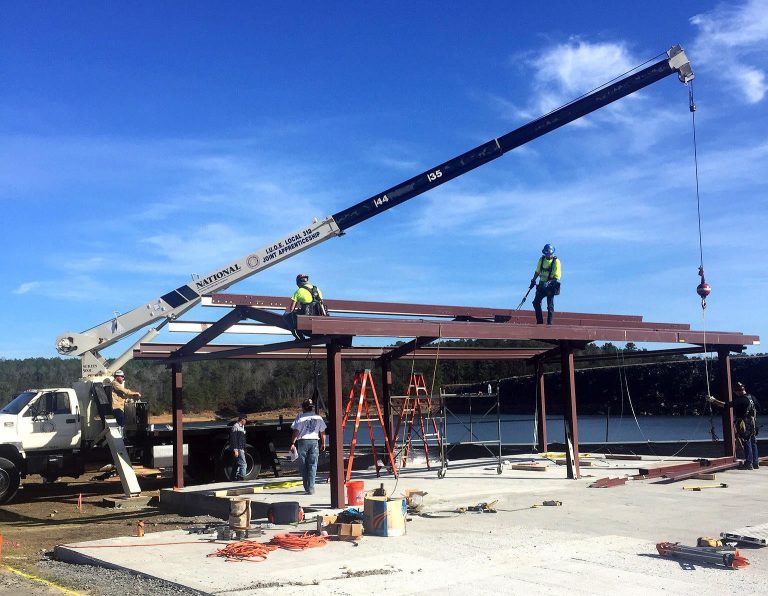 Union Sportsmen’s Alliance (USA) volunteers are making fast progress on a new public fishing tournament weigh-in pavilion at Alabama’s scenic Smith Lake. The state-of-the art structure is being created at no cost to the local community through a partnership between the USA, B.A.S.S. and Alabama Power.

Located between Birmingham and Huntsville, 21,000-acre Smith Lake is popular with tournament and recreational anglers from across the nation. Its deep, clear waters hold a variety of gamefish including largemouth and spotted bass, sunfish and striped bass. The lake is nationally known for trophy size spotted bass. In fact, it produced the Alabama state record spotted bass in 1978â€”an 8-pound, 15-ounce behemoth that also set a world record at the time.

“We are thrilled to work with B.A.S.S., the Union Sportsmen’s Alliance, the Alabama Department of Conservation & Natural Resources and the local community to construct this pavilion that will enhance this access point on Smith Lake,” said Zeke Smith, Alabama Power executive vice president of external affairs. “We look forward to it opening and playing a part in showcasing the state of Alabama’s beautiful waterways.”

The new pavilion will help anglers enjoy Smith Lake’s bounty while protecting the lake’s priceless resources. It will feature water access and the capacity to hold fish tanks to help reduce stress on fish and increase release survival rates at the weigh-in site. The covered facility also will provide shade for tournament weigh-in ceremonies.

“This pavilion will provide a much-needed place for organizations to hold their weigh-ins, from local bass clubs to the largest Bassmaster Opens tournaments,” said B.A.S.S. Conservation Director Gene Gilliland. “Alabama Power’s support of this project, combined with the engineering expertise donated by the Alabama Department of Conservation & Natural Resources as part of their larger boat ramp renovation project, and the incredible construction skills of the Union Sportsmen’s Alliance volunteers, are very much appreciated.”

All community residents will benefit, as tournaments are a boon to the local economy. For example, each B.A.S.S. Elite Series tournament drives in excess of $1.1 million in direct economic impact. Thanks to media exposure, each event also generates an average of $17.9 million in additional tourism revenue within two years of the tournament.

Construction on the pavilion project is being done by skilled labor union volunteers through the USA’s Work Boots on the Ground (WBG) conservation program. “We’re proud to partner with B.A.S.S. and Alabama Power on this project, which will benefit Smith Lake anglers for years to come,” said Union Sportsmen’s Alliance Conservation Manager Robert Stroede. “Our union volunteers are passionate about the outdoors and conservation, and they enjoy sharing their time and trade skills giving back to their communities.”

Volunteers from the following unions and groups are donating their time and job skills to complete the project: Electrical Workers Locals 136, 833 and 841, Operating Engineers Local 312, Laborers Local 559, Carpenters Locals 318 and 1209, Millwrights Local 1192 and Iron Workers Local 92. The project is also supported by the Alabama AFL-CIO and the USA’s Alabama State Conservation Dinner. Volunteers from additional unions are also expected to participate.

Stroede estimates union volunteers will donate more than 1,000 hours of skilled labor valued at over $50,000 to complete the pavilion. In all, he expects the value of donated labor, materials and machinery to top $100,000.

Casey Shelton, business manager of Electrical Workers Council U-19, was thrilled to see union volunteers tackle the project. “As part of the Union Sportsmen’s Alliance and a high school fishing coach, I am proud to see this project underway and excited about the positive impact it will have on the fast-growing sport of high school fishing,” said Shelton.

“This is a great example of a diverse group of entities coming together to achieve one goal,” added Chris Blankenship, commissioner of the Alabama Department of Conservation & Natural Resources. “We are proud to be a part of this project and continue our mission of accessibility to the natural resources of our great state.”

The Smith Lake pavilion project is expected to be completed by mid-March. 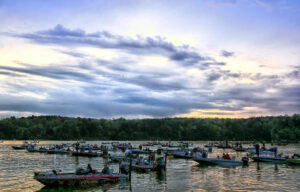