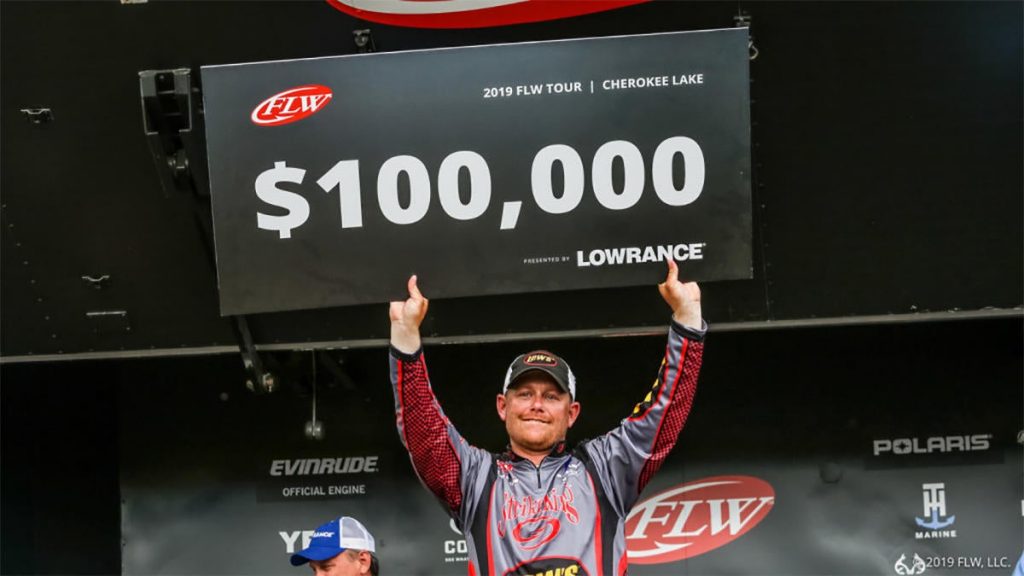 “This week was phenomenal – there’s no other way to describe it,” a visibly emotional Upshaw said on the FLW Tour weigh-in stage Sunday afternoon. “Through practice, I knew I was on something special, but I didn’t know just how special.”

Upshaw’s week on the water primarily involved targeting spawning bass. Early on, he said he lured bites with a drop-shot rig, using a green-pumpkin-colored Strike King KVD Drop-Shot Half Shell with a 1/8-ounce weight, but ended up switching after breaking it off 30 minutes into day one of competition. He proceeded to pick up a 4-inch, wacky-rigged Strike King KVD Perfect Plastic Ocho of the same color and went to work putting together consistent limits around mid-lake islands. He said he preferred 10-pound-test Seaguar Smackdown braid line with a 6-pound InvisX fluorocarbon leader.

“These fish stay around these islands all year long – they don’t leave,” said Upshaw. “I caught some on banks, but all my big ones came on islands. I wanted to be around the deepest water and the steepest banks. It had to have boulders out in front, and more importantly, the bank had to have somewhat of a turn in it. It didn’t have to have a cove, but just a turn – those smallmouth were spawning in them. There was just enough [curve] to get them out of the current where they could spawn.

“I took the Ocho and pitched it behind those boulders because that’s where they were spawning,” continued Upshaw. “Everybody was casting out in front and in the cracks, but they were actually behind the boulders the entire time. Anybody throwing a weighted bait, whether it was a Ned rig or a shaky-head, wasn’t able to effectively fish it because it was dropping so fast. By pitching that very, very light-weight Ocho around, I was able to get the fish that no one else was fishing for.”

On Championship Sunday, Upshaw slipped and surrendered the lead for a significant period of time, but after a last-minute stop at a secondary area he’d been saving – two points a quarter-mile from takeoff – the Oklahoma pro made two culls that would end up putting him over the top.

“Off to the side of one of the points there was a rock pile – it had isolated boulders and only big ones were moving up on it,” said Upshaw. “I caught a 3 ½-pounder and one that weighed about 2 ½ pounds to cull out two small fish.”

Overall, there were 50 bass weighing 146 pounds, 14 ounces, caught by pros Sunday. All of the final 10 pros were able to bring five-bass limits to the scale.

Television coverage of the FLW Tour at Cherokee Lake presented by Lowrance will premiere in 2019. The exact air-date will be announced soon. The Emmy-nominated “FLW” television show airs each Saturday night at 7 p.m. EST and is broadcast to more than 63 million cable, satellite and telecommunications households in the U.S., Canada and the Caribbean on the World Fishing Network (WFN), the leading entertainment destination and digital resource for anglers throughout North America. FLW television is also distributed internationally to FLW partner countries, including Canada, China, Italy, Korea, Mexico, Portugal, Spain and South Africa.

The total purse for the FLW Tour at Cherokee Lake presented by Lowrance is more than $860,000. The tournament is hosted by the Economic Development Alliance, Jefferson County. The next event for FLW Tour anglers will be the FLW Tour at Lake Chickamauga presented by Evinrude, in Dayton, Tennessee, May 2-5. The tournament will be hosted by Fish Dayton and the Rhea Economic & Tourism Council.

In FLW Tour competition, the full field of 164 pro anglers competed in the two-day opening round on Thursday and Friday. The top 30 pros based on their two-day accumulated weight advanced to Saturday. Only the top 10 pros continued competition Sunday, with the winner determined by the heaviest accumulated weight from the four days of competition.

Throughout the season, anglers are also vying for valuable points in hopes of qualifying for the 2019 FLW Cup, the world championship of professional bass fishing. The 2019 FLW Cup will be on Lake Hamilton in Hot Springs, Arkansas, Aug. 9-11 and is hosted by the Arkansas Department of Parks and Tourism and Visit Hot Springs.