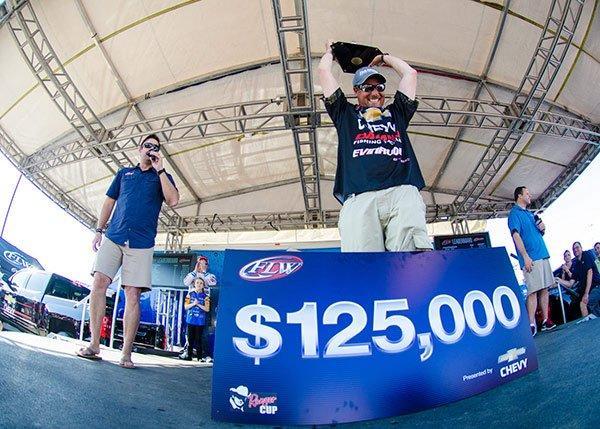 Chevy pro Bryan Thrift of Shelby, N.C., brought a five-bass limit to the scale Sunday weighing 17 pounds even to overtake Walmart pro Mark Rose and win the Walmart FLW Tour at Sam Rayburn Reservoir presented by Chevy. Thrift’s four-day total of 20 bass weighing 73 pounds, 3 ounces earned him the top cash award of $125,000 in the event that featured 176 of the world’s best bass-fishing anglers competing in the four-day competition. The tournament will be nationally televised on NBC Sports Network in June.

Rose, the tournament leader after days two and three, brought five bass to the scale weighing 11 pounds, 1 ounce. His four-day total of 70 pounds, 2 ounces earned him a 2nd-place finish, worth $30,500.

â€œThe first morning of the tournament I decided that I needed to fish slow and steady,â€ said Thrift, who earned the third Walmart FLW Tour victory of his career. â€œI had been catching a lot of fish on moving baits â€“ crankbaits and ChatterBaits. I got up to my area on the morning of day one and two hours in I hadn’t had a bite. I knew something had changed. I started to slow down and pick everything apart.â€

Thrift said that he fished an area that was about five miles long up the Angelina River. He estimated that he covered new water for about 3 hours each day of the tournament, targeting cypress trees and grass patches.

â€œToday I really focused on 10 particular trees,â€ Thrift said. â€œI would put my Power-Poles down on those trees and flip very slowly, every two inches, all the way around that tree. I was spending 15 to 20 minutes on each tree.â€

Thrift said that his key bait this week was a Texas-rigged Damiki Knock Out with a 5/16-ounce weight and 20-pound-test P-Line fluorocarbon line. He flipped the Knock Out in both green-pumpkin and junebug colors. Thrift also said that he caught two or three key fish Sunday morning on a Z-Man Original ChatterBait.

â€œI hadn’t caught any fish on a ChatterBait until today,â€ Thrift said. â€œI caught two 3-pounders on it this morning and it calmed me enough that I could pick that Knock Out up and fish slow like I needed to.

â€œFinishing in 107th at Lake Hartwell left a bad taste in my mouth,â€ Thrift went on to say. â€œI never figured anything out and it seemed like every decision that I made was the exact opposite of what I should have been doing. After finishing 3rd at the Rayovac Series event two weeks ago at Santee Cooper and now winning here, I hope I’ve righted my ship and can get back on a streak of good finishes.â€

Overall there were 42 bass weighing 109 pounds even caught by pros Sunday. Six of the final 10 pros caught five-bass limits.